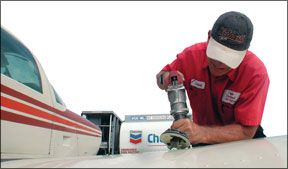 Ten years ago, when avgas prices soared to the point of being noticeably painful, fuel costs were still the smallest percentage of total operating costs. In an era of $5-plus avgas, thats less true for owners who operate airplanes burning 8 GPH or more. So now, the question is no longer how to find cheap avgas-there isnt any-but how to avoid getting your eyes gouged out on a typical fill-up.

An unpleasant reality is that avgas prices have become wildly spiky from airport to airport-its not unusual to see a $1.50 or $2 difference between airports in the

same region or even across town. Our favorite example is the poster child for high gas prices-Jet Aviation in Teterboro, New Jersey, which was charging a salty $8.68 at press time. Yet 21 miles away, Greenwood Lake Airport was asking $5.36 for a difference of a whopping $3.32. For a modest fill-up of, say, a Cessna 172, that amounts to $116 total. For a big single, its more like a $250 and a total charge of $650.

Owners who travel with their airplanes by necessity have to plan around high fuel prices-forget winds and weather; find an airport with affordable fuel. But whats the best way?

We recently compared two services that purport to do this and although both struggle to keep fuel prices current in a commodity-based market, what matters most is not the actual price, but the ratio between the highest and the lowest in the particular area you plan to buy fuel in.

The good news is that FBOs that sell on the low side tend to be the lowest through all kinds of fluctuations and those that charge north of $7 or $8 are rarely stricken with largesse and a burning need to give their customers a price break.

The online world provides two major services for finding good deals on avgas, the well-established www.airnav.com and a recent newcomer, www.100ll.com, an offshoot of Control Vision, which makes and markets the Anywhere Map line of GPS navigators. As we reported in the October issue, the 100LL.com service is incorporated into the Anywhere Map software and for $39.95 a year, you can subscribe to a revision service that automatically keeps the navigators fuel price database up to date so you can access it on the fly.

Both services use pilot feedback to report recent prices and these are posted and either sortable by age or age stamped, so you can tell when the last price was reported. Worth noting is that avgas prices generally arent as volatile as autogas prices are, thus a two-week-old price may very well be accurate within pennies. In addition to pilot surveys, 100LL.com also does active surveying of FBOs to freshen its fuel price data.

AirNav seems to follow the Google philosophy of Web page presentation, with nothing but a list of service tabs across the top of the page. All of the principle fuel data services are free. By clicking on the fuel tab, you can bring up a menu of five choices to update fuel prices, check prices, see a list of good fuel deals, plan a flight around fuel prices or view a statistical summary of recent prices.

Checking current prices is easy-just key in the airport ident or a zip code, select Jet A, 100LL or mogas and click find prices. You can filter price reports by age, from 30 days to a year. You get a summary of fuel prices in tabular form within 50 miles of your selected airport.

Simple stuff, as far as it goes, but AirNavs real power app is a rudimentary flight planning function that allows you to plan a flight entirely around fuel prices, which is something more owners are telling us they do. You tell the planner your departure and destination, what kind of airports you want to use, leg length and fuel types. You can ask the planner to calculate either the shortest length or cheapest flight, based on what it knows about fuel prices enroute. It then presents a rudimentary fuel-priced-based route in still air. (Or, you can gather wind data and give it a rough gouge on groundspeed.)

What we find clever about this function is that its capable of showing that a longer route could very well cost less money to fly. For instance, we asked it to plan a flight from Sarasota, Florida, to Portland, Maine, with one stop. It generally picked small country airports for the single fuel stop, but calculated that stopping at one (relatively) larger airport-Danville, Virginia-would cost us $42 in higher fuel costs.

Just for the heck of it, we asked it to calculate fuel costs based on our favorite places to stop-Myrtle Beach and Norfolk. But either of those stops resulted in fuel prices 50 cents to $1 or more higher. That adds another $50 to $60 to trip costs just for the pleasure of a posher FBO. Were not sure its worth it, frankly.

If youd rather not mess with AirNavs planning functions, it also has a page that lists good deals on fuel by state, the cheapest current prices the database has. This can be printed out and carried along in the airplane to make on-the-fly decisions about fuel purchases.

AirNav offers a pay service called AirBoss. Its essentially a paid membership program that offers fuel discounts at select FBOs. For a $39 a year membership, AirNav claims to deliver an average of 20 cents per gallon in discounts. If you buy more than 150 gallons, you break even, otherwise the benefits may be elusive.

In its online iteration, www.100LL.com is less sophisticated than AirNav, but it does have the advantage of being downloadable to the Control Visions Anywhere Map software, including the ATC which we reviewed in the October 2008 issue of The Aviation Consumer.

As with AirNav, you can search prices at a specified airport and regional fuel costs are given in summary form. The database also updates the Anywhere Map database with airport directory and nav facility data. Although you can query prices at specific airports for free, the full database is by subscription only and costs $39.95 a year. Anywhere Map has an online updater service that you install on a desktop or laptop computer. Plugging in the portable then automatically updates it in a few minutes. This process worked seamlessly for us.

100LL lacks AirNavs plan-by-fuel-costs capability, but third party providers such as www.navmonster.com incorporate 100LLs data and allow this to some degree. As incorporated into the Anywhere Map software, the fuel price data appears as a button called “cheap fuel” on one of the flightplan information pages. Tapping on the button calls up another dialog box that asks for fuel type and lets you specify the age of the fuel data. Tapping OK yields fuel prices in tabular format, with the age of the latest data.

Which service is the best value? Thats easy: AirNav. Its free, easy to use and has a rudimentary plan-around-fuel-prices function. But it does require the effort on going online and doing a little legwork, which, surprisingly, some owners tell us they dont do.

Were not sure the AirBoss service is worth the money. Said reader Art Friedman: “I purchased AirNavs AirBoss card…but so far Im not impressed. First, the discounts are usually small. Second, the number of FBOs is small. Finally, the discounts are only applied to full-serve fuel and I prefer self-service for various reasons, including the fact that it is invariably cheaper, even with the AirBoss discount on full-serve.”

For those who prefer planning fuel stops on the fly or who just want current fuel data in up-to-date digital format, 100LL and the Anywhere Map software strike us as a worthy tools . As we noted in our review of the ATC, saving a buck a gallon on a couple of fillups will almost pay for the device. An alternative is to print out AirNavs Great Deals page in pocket format-the site has a button for this-and carry it with you. Thats not as flexible as 100LLs digital database, but since its free, the price is right.