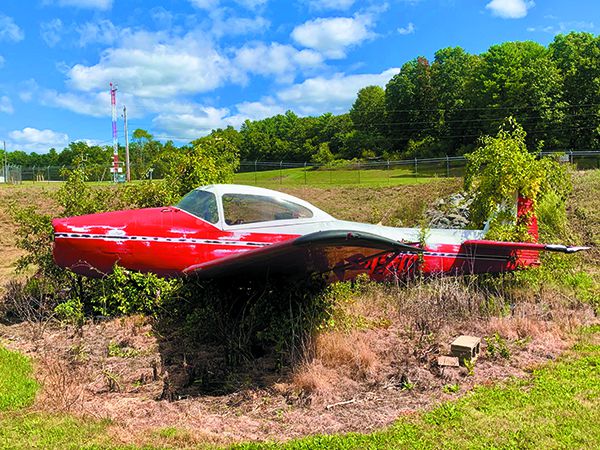 A motorcycling buddy and I amuse ourselves with weekend rides to backwoods airfields to see how many abandoned aircraft we can find. Boneyard rides. We found a lot of basket cases this past riding season. A shame that what might be good airplanes—Cessna 150s, V-tail Bonanzas, J-model Mooneys (and yes, a North American Navion serving duty as a landscape planter)—are left in the weeds to rot, while owners still send in their checks for the tiedown fees. I guess some things are just tough to part with. Don’t tell the spouses, but after seeing all these planes we’re thinking this could be a good time to make a smoking deal and pull the trigger on an airplane partnership, especially with all the cheap money banks are lending for aircraft. But after running some numbers and talking with aircraft appraisers, we’re holding short with the checkbooks.

The Fall 2020 Aircraft Bluebook (a starting point for shopping the market) suggests that a 1975 Cessna 172M retails for $60,000, as an average. It assumes the 150-HP Lycoming O-320-E2D is within 1000 hours of a major overhaul and the cylinders are within 85 percent compression, and the airplane is within six months of a fresh annual, has average airframe time, good paint and interior, original logs and no damage history. The equipage specs in the Bluebook show it pretty much as it came off the line in 1975, with dual navcomms, a transponder and an ADF (yes, it even comes with a bar ornament). In a perfect world, all this poster child needs is a new avionics package. A modest rework with small-screen EFIS, panel navigator, two-axis autopilot, ADS-B, new antennas and a decent audio system will be a $35,000 upgrade, for starters. Sure, you can do it cheaper, but that’s a typical upgrade for a long-term keeper, at least ultimately. And that makes for a $90,000 46-year-old Skyhawk. If the O-320 tanks, an overhaul could run $25,000.

Jump to the live market, using the popular Controller.com aircraft listing website as a reference, where I found older so-called turnkey Skyhawk models listed for as much as 25 percent more than the Bluebook starting price, but most still need avionics upgrades—which isn’t exactly turnkey if you ask me. If it doesn’t have ADS-B (and some don’t) it might even be stuck where it sits. And as you might suspect, ones with real avionics upgrades are premium priced. That was the case with a 1969 172K Skyhawk. The Bluebook suggest an average retail of $38,000, but not this one priced at $90,000 and loaded with the latest avionics. It has dual Garmin G5 displays, Garmin GFC 500 autopilot, GNC 355 panel navigator, a GTR 225 navcomm radio for backup, plus an ADS-B transponder with wireless capability. All of the gear is still covered under Garmin’s warranty. The airframe has average time and the engine has 1300 hours since a major overhaul 15 years ago, with cylinder compressions advertised in the upper 70 range. The McCauley propeller was overhauled 15 years ago and has roughly 1500 hours on it. On the ramp this old Hawk is a cherry, with fresh paint that’s still drying (our recent paint shop market survey revealed this is typically a $15,000 expense on a small piston single), plus the rear and side Plexiglas was replaced 10 years ago—right around the time the cabin got new leather. How much this old bird will fetch is anyone’s guess, but I asked Chris Reynolds, a valuations expert, aircraft appraiser and an editor at Aircraft Bluebook, how realistic asking prices like this example really are. Moreover, how do appraisers come up with accurate figures for such a wide variety of aircraft? There’s more to it than I thought, it’s not perfect economics and there are lots of moving pieces and time-sensitive variables. Even in these unpredictable times, he’s busier than ever working with banks as they deal with the huge demand of used aircraft buyers. Prices are up—way up—and I have to wonder when the trend will come crashing down.

For typical piston models, Reynolds said he gathers data from lenders (Airfleet Capital is one example), Aircraft Bluebook subscribers and dealers and he even cold calls on airplanes that are (or aren’t) for sale.

“We take the prices that we get from these sources and triangulate them with what the current market dynamics are. What are people asking and expecting—and what did it ultimately sell for?” Reynolds told me. In general, for aircraft that are priced appropriately (some sellers are unrealistic or aren’t serious about selling) this combination of data gives appraisers an idea of what price range an aircraft should be valued. Hands down the biggest variables (other than engine and airframe time) are avionics upgrades, as we see with that older Skyhawk example. It’s tricky.

The rule of thumb at Aircraft Bluebook has generally been that after determining the equipment’s age, add the percentage of its list price (when new) to the aircraft’s typical market value. For an avionics system that’s two years old, that’s 55 percent of its price, and 60 percent the first year. If it’s between five and nine years old, add 30 percent.

That’s a sizable hit, especially if you’re still recovering from the sting of a major upgrade, and you won’t recoup shop labor. But that could be changing thanks to new technology. We could eventually see no depreciation during the first year or two after the upgrade and that makes sense.

Reynolds told me that newer digital equipment like Garmin’s GTN series navigators and EFIS displays take less of a hit as they age because software updates can add to their useful life, while maintaining a steady value even as they age. That’s not the case with older analog gear that’s shotgunned during an upgrade. Here we’re talking navcomms and traditional instrumentation.

Reynolds admitted that while the training market has been so hot the past few years, with sizable demand for good airplanes like Skyhawks and Cherokees, aircraft appraisers may still be behind the trend. That’s pretty much in line with what I’ve seen when comparing price guides with actual market asking prices. If you’ve recently shopped the Cessna 172 and Piper PA-28 market you’ve likely seen the same thing. These airplanes are being listed at top dollar, and ones decked out with the latest avionics are pretty much untouchable if you’re looking for a bargain.

Additionally, Reynolds hinted that used dealers who specialize in and sell a lot of a specific model may inflate the market asking prices of the entire fleet with premium prices, even though these prices may not represent the general value of the entire fleet. That makes the shopping process even more difficult. Is a clean Skyhawk being sold by a high-volume used Cessna retailer worth more than the cherry that’s for sale by your hangar neighbor? It’s worth pondering.

For some models, it doesn’t matter how many upgrades it has. It simply won’t bring the money a seller thinks it’s worth, and if it sits on the market for an extended time it can actually hurt the value. Historically, aircraft that have lots of upgrades (especially new avionics) will generally always sell faster than ones that are begging for an upgrade. But, that doesn’t always mean it will bring top dollar.

“You can lipstick the pig, but that doesn’t always mean you can get dollar-for-dollar back out of it,” Reynolds said. For others—including a refurbed Skyhawk with the latest gear—the current market demand reflects just the opposite. They’re hot.

Finally, if you’re like me and are tempted to bring home something from the boneyard, proceed with caution. Some aircraft are better left as landscape planters.