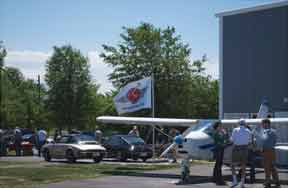 If youre looking a feel-good piece about how flight training is on the rebound and were on our way back to viable flight schools running side-by-side with every mom-and-pop FBO, youre reading the wrong article. (Actually, youre probably reading the wrong magazine.) Flight training never had a reputation as a cash cow, and the current economic climate hasnt helped that situation.

But there have always been, and still are, flight schools that run in the black. In fact, in just the past few months, we came across a couple not just getting by but expanding despite all the dire numbers of the current economy. We decided this was

worth a critical look. Did these folks have some secret formula for success, or were they dumping resources into a temporary bubble that will collapse under its own economic impossibility before the year is out?

It turned out that neither was true. The not-so-secret formula is the same its always been: Find a market that can pay the price your bottom line requires and fully satisfy its needs. We saw several formulas to meet those needs, depending on the market niche. Not surprisingly, they largely mirrored the findings of AOPAs recent study “The Flight Training Experience.”

“Flight schools fail for the same reason restaurants fail,” Bob Miller of Bob Miller Flight Training told us. “Theyre run by cooks.” Miller has been an outspoken horn for changing the way we do general aviation training. Having founded and run businesses before, he put his money where his mouth was and founded Bob Miller Flight Training (BMFT) in 2008. The first office was at Buffalo-Lancaster airport with one plane and himself as an instructor and owner. Now four instructors working at least part time take care of the teaching out of four locations in three G1000 Cessna 172SPs and one Skycatcher.

“Were charging 30 percent more than our competition,” says Miller. That translates into $159/hour for the new 172s and $65/hour for the instructor. But even with steeper rates and only a mid-sized local population, BMFTs hours has steadily grown. “People assign value with price.” But then, of course, you have to deliver on the value. Millers staff does this by mixing training with cross-country flying and real-world experiences whenever possible. “We do a lot of ground training in restaurants.”

BMFT has experimented with webinar training as an income stream and is looking at sending groups of students on multi-day training trips to warmer climes during winter months. He also uses the standard ploy of incentives to keep the revenue flowing. Instructors keep $100 for each $300 training kit they sell. If they were the primary instructor for a student who eventually bought an airplane, thats $5000. BMFT has sold four airplanes in the last four months. “This goes back to the business owners that we cater to. They want to get to Chicago, Boston, D.C., New York or Philadelphia. Thats faster in a 206 than commercially.”

Lewis Liebert of Performance Flight draws on the much bigger market of New York City and agrees with many of Millers tactics. His fleet of primarily Cirrus aircraft rent for $265/hour for an SR20 up to $325/hour for an SR22 Turbo. Instruction is $95/hour. On the same airport, you can get a G1000 172 for $172/hour and an instructor for $65/hour. “Weve never lost a student to them, but we pick up students from them,” says Liebert.

Liebert will tell you right away: “Im not an instructor. The worst thing I can do for my company is to spend it in the air. Thats far less substantial than what I can do on the ground to grow the company.” He must be doing something right. Performance Flights revenue has grown a fairly steady 20 percent per year. A one-plane operation in 2007 is now a rental fleet of 13 plus management of several more. They also pull revenue from sales and charter. “As we add more modules, they all bring in incremental revenue.”

But would this scheme work outside the affluence of the Big Apple? “Ive visited other Cirrus centers, and the common theme was undervaluing their aircraft,” Liebert told us. “Where we would charge $500 for managing an aircraft, they would charge $200. Theyd say, But people wont pay more out here. I say, Well, they paid the same amount for the airplane.” Hes got a point.

There are flight schools doing well that arent pushing the latest piston singles for the highest prices on the field. Chesapeake Sport Pilot (CSP) opened in 2007 at Bay Bridge airport in Maryland. Their first year saw 1263 hours with an average of three Light Sport aircraft online at any given time. By last year that was 3300 hours on eight aircraft. Are they the cheapest option in the area? Nope. But they do offer a cheaper alternative than renting four-seat equipment.

They also keep clients engaged. Tim Adelman, co-founder of CSP, says, “We have a community nature. We encourage people to come out. We have impromptu barbecues. The fridge is full. They feel theyre part of the aviation community.” CSPs Chief Flight Instructor tracks each student and helps ensure peoples progress. Regular follow-ups from someone high in the company to check in during and after training was another common theme in successful schools. CSP has several independent, high-time instructors. Adelman says, “The customer-instructor relationship is extremely solid.”

What about trip training? “We dont muddy the waters by going to Ocean City for lunch,” says Adelman. But CSP does sponsor flyouts, including taking LSAs into Dulles International.

If theres any surprise in this research its that theres no surprise. None of this is revolutionary thinking. Case-in-point was our talk with Nick Frisch, who turned around two struggling flight schools, Galvin Flight Training in Seattle in 1998 and Florida Institute of Technology in 2007. Both went from marginal operations to top-notch facilities turning profits and drawing international business.

“I tend to focus on the customer experience. Businesses need money to operate. That comes from customers, company subsidies or debt. My goals is to have the money come exclusively from customers.” Frisch used the same tools-replacing aging aircraft with newer ones, targeted marketing, realistic prices that met the bottom line, and rewarding and developing his staff. But he points to the last one as the most important because they control the customer experience. “I had someone tell me once, Nick, people go where they are welcome, and stay where they are appreciated.”

Investing in staff training was another common theme. The successful schools not only paid their staff well, they paid for the staff training. Luke Lysen of The Flight Academy (TFA) put a number on it. “It costs us about $10,000 to fully train an instructor.” Thats commitment. But its paid back in voluntary loyalty and the quality instruction that comes with that kind of expertise. Lyson is the first to point out his margins are thin but, “2010 was our best year ever by any metric-gross, net, or hours.”

The cold reality that peeks its ugly head out from every corner of this research is that not every zip code has a market big enough or affluent enough to support a flight school, and that not everyone near a flight school with a dream of flight will be able to afford it. Even for schools that target the less affluent segment, they tend to be successful pitching themselves first on quality within that segment. “I think theres a big effort by AOPA to pitch flying as everymans activity.” Liebert said. “Its not.”

Lyson put it another way, with a sad lilt of resignation in his voice. “I had client say to me once, You can be Walmart or Tiffanys. Theres nothing in between.”