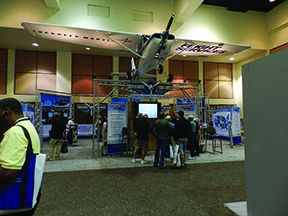 Lockheed Martin Flight Services (LMFS) has created a website for flight planning, filing flight plans and adverse condition alerting. It’s mostly easy to use, we like what we see and are looking forward to planned increased capabilities.

One of the larger displays at AOPA Summit this year was created by LMFS to announce the rollout of its new website for flight planning and adverse condition alerting. Our first reaction was, so what? After all, with the plethora of flight planning apps available today, who cares about another one? Besides, given all the attention to flight planning apps, do pilots even make phone calls to 1-800-WX BRIEF any more?

It turns out that thousands of pilots call FSS every day even if they self-brief via their computers or digital devices, and LM’s web portal is a handy tool that looks to get even more useful over the course of the next year or so.

Privatization of the FSS network via a 10-year contract between the FAA and LMFS has saved the taxpayers some $1.7 billion according to Jim Derr, LMFS’s director of flight services. As part of the contract, LMFS has been working with the FAA to come up with ideas through which the FSS system can help reduce the stubbornly high general aviation accident rate. The result is the new website (https://www.lmfsweb.afss.com) that allows a pilot to self-brief using about 98 percent of the material that an FSS specialist looks at in a telephone briefing, file flight plans that go into the system immediately and sign up for LMFS’s new Adverse Condition Alerting Service (ACAS).

Alerts
According to Derr, ACAS uses a “four-dimensional model, three-dimensions plus time,” to send alerts to pilots of adverse weather conditions, TFRs and urgent PIREPs that arise between the time the pilot files a flight plan and launches on the flight. This service is free and available for any pilot who requests it, whether the flight plan is filed via telephone with a briefer or on the website. Alerts are sent via e-mail, text message and/or iridium satellite device (currently Spider Tracks). It will eventually use ADS-B. Because the system is set up to consider an area about 50 miles on each side of the flight plan route, over the time in which the aircraft should be at a given point on the route, it is anticipated that relevant alerts will eventually be sent during the flight itself.

Personal Home Page
The website proved easy to use with some shortcuts we liked and a surprisingly large geographic weather coverage area. On initial use, you tailor a home page with as many as four weather charts of your choice and the METARs, TAFs and NOTAMs at as many as three airports. From then on, that weather info displays when you sign in. On your initial visit or at any later date, you can also sign up for, although we were frustrated that once we had signed up for alerts—in the “Account Preferences” tab—we could not go back and see what we had signed up for and confirm what we had done.

The “Weather” tab opens up virtually all of the information available to an FSS briefer and includes all of North America, Central America, the Caribbean, northern South America, the Atlantic and Pacific.

The “Flight Planning and Briefing” tab gives you a choice of an FAA or ICAO flight plan form. Once you have filled in the required fields you can hit the “brief” button and generate a full briefing, much as you would receive from an FSS specialist. We eventually figured out that pop- up blockers have to be turned off to get the briefing pages to show. The first page of the briefing generated is Alerts and Hazards to Flight, including TFRs. Of those, presidential TFRs, the bane of so many pilots, are the first thing to appear, something we liked. Some other services bury TFRs in pages of data as pilots have discovered to their dismay after a TFR bust.

Going back to the flight plan page allows you to tailor your flight plan as you wish based on your briefing and then file it. Because you have filed it through LMFS and it goes directly into the system, it is immediately available to an FSS specialist should you need to call up and amend it. Many of us have learned that is not the case when filing through another service, as many hold the flight plan until a fixed time before proposed departure before putting it into the system.

The “Airports” tab pulls up much of the information you might want about an airport, including approach charts, except for the identity of FBOs and information on fuel prices. Under “Tools,” you can find a guide to abbreviations, which we found ourselves relying on because METARs and TAFs are not presented in decoded form.

The “links” tab takes the user to Sky Vector’s aeronautical chart website, which we found easy to use, includes weather information and graphical TFRs. Currently a flight plan created on Sky Vector does not automatically transfer to the LMFS site, however, we were advised by LMFS chief architect, Mike Glasgow, that the two companies are working on a way to gather the route elements so they may be pasted onto the route field on the LMFS flight plan.

Search and Rescue
We like what we have seen so far. We are looking forward to see what LMFS does with the capabilities of the site in the next year. Flight Services director Derr gave us an outline of what we might expect. He first explained that LMFS is involved with over 10,000 search and rescue events annually. SAR is not initiated until an airplane is at least 30 minutes overdue. The first step is usually a series of telephone calls to see if the airplane has landed, and the pilot simply forgot to close the flight plan.

The start time and initial calling process also means that an airplane that goes down 20 minutes into a three-hour flight is not going to be the subject of a search for some time after the accident, time that may be critical. According to Derr, LMFS will introduce Surveillance Enhanced SAR in the spring. Through an aircraft’s iridium satellite device (the vendor will charge a fee—LMFS will not) SAR will be triggered if the airborne unit stops transmitting, pings stationary or the pilot pushes the emergency call button on the device, significantly cutting down the time until the real search is underway.

Derr said that another early development will be “live meeting” capability on the website so that a pilot on a telephone briefing with a Specialist can share the same screen image, allowing what almost amounts to the long-lost and popular in-person briefing.

“Auto-summarization” should appear on the website in 2013. A printout of a full briefing can involve dozens of pages of material—when a pilot calls FSS, the specialist summarizes the data for the pilot, culling out the extraneous material. An algorithm developed by LMFS will do this automatically on the website, saving time for the self-briefing pilot. If the pilot desires more, it is still available with a few clicks.

Chief architect Glasgow said that decoded weather and a nav log are also coming to the website as well as upgraded ACAS so that alerts will appear on the pilot’s home page.

Conclusion
Especially for those who prefer to talk to a FSS briefer, the LMFS web portal provides flight planning information in a format that is familiar and easy to use. We don’t know how many times we’ve filed a flight plan a few hours prior to departure and, once aloft, discovered that thunderstorms had popped up unexpectedly along our route, so we are looking forward to taking advantage of the ACAS.

We are also very interested in the upcoming enhanced SAR and other features and will be reporting on them when they come out. LMFS has some innovative ideas that may enhance safety. We’re hoping it can deliver.