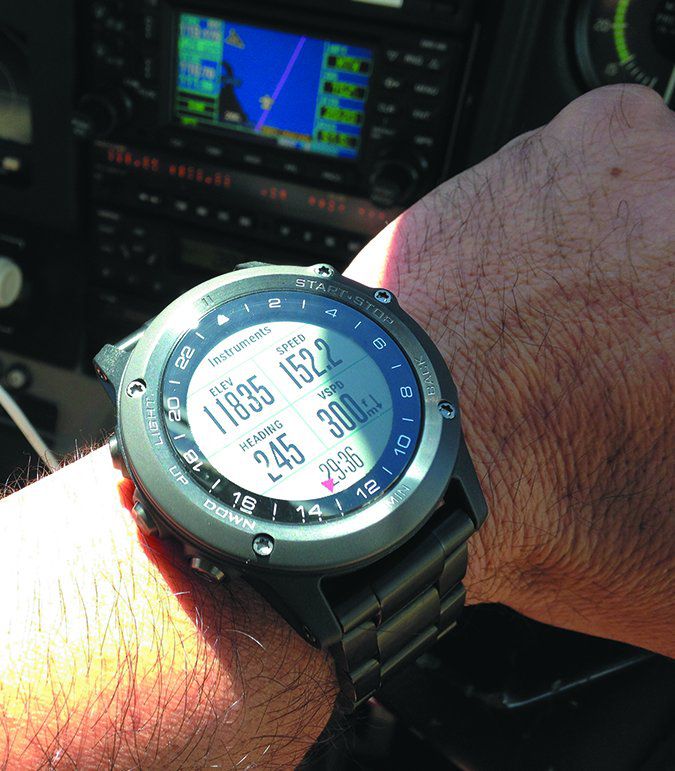 On an FBO bulletin board I recently spotted for sale two Garmin Bravo pilot smartwatches. There’s more on eBay. This got me thinking that since the D2 could make a good used market buy, it’s worth running a long-term field report to chase the original review we ran in the August 2015 issue of Aviation Consumer.

I’ve been wearing the soft-strapped D2 Bravo and the newer all-metal D2 Titanium for flying and sports activities and while it took a while to warm up to a somewhat quirky user interface, they turned out to be good everyday watches that expand the Garmin Pilot app.

As pilot watches go, Garmin’s second-gen D2 Bravo and the latest D2 Titanium may not be as handsome as a Breitling or a racing-inspired Tag Heuer Carrera, but they cost far less ($899 for the Titanium and $599 for the Bravo) and do a whole lot more in and out of the cockpit. Which functions you’ll use will depend on what you have for external sensors, whether or not you are a Garmin Pilot app user and whether or not you’re into sports and fitness.

For example, both models are compatible with Garmin’s speed and cadence sensors for bicycling, the heart rate sensor (the Titanium has its own integral heart rate monitoring), the Tempe wireless temperature sensor for measuring ambient air temperature, plus Garmin’s Vector pedal-based cycling power meter. They also work with Garmin’s VIRB series action cams.

These watches serve as basic navigators and have a GPS receiver and internal worldwide aviation database, which only includes airports. I found that navigating directly to an airport is straightforward. Using the upper right bezel button, select the Fly menu and then scroll through the letters to input the airport’s identifier. The watch is far from an FMS, but I recognized its basic utility flying a glider when soaring in an unfamiliar area. The direct-to/nearest airport feature could be useful during an electrical failure.

You can view the active route/waypoint guidance on the basic map display (don’t expect much—it’s stark) or follow course guidance with an onscreen HSI, which I found more useful. You can also mark your own waypoints. The internal GPS/Glonass worked well and locked on quickly, although other users have reported issues.

The watch has an altimeter (and a compass) and you can set vibrating alerts from inside the Pilot app to remind you to level off, switch fuel tanks or other chores.

As a guy who prefers a basic analog watch, I didn’t expect much from the LED backlit display, which Garmin calls Chroma, but it was acceptable in bright sun. As for the feature set, there was a learning curve. Since these watches have limited controls, you’ll spend some time learning to navigate onscreen menus—something I think might be improved upon with a touchscreen. On the other hand, that could pose more challenges given the small confines of a watch face.

Keep Up with Software

If you have an existing D2 Bravo, which was released in June 2015 (or the newer Titanium released in May 2016), and haven’t kept up with software updates, you’re shortchanging the overall smartwatch interface. Garmin considerably improved the feature set from early software versions.

If you’re still on software version 2.30, the jump to 2.40 was a major one. It added flight plan transfer capability from Garmin Pilot (this requires the PilotSync Connect IQ app and Garmin Pilot for Android version 5.3 or iOS version 8.3). It also added current UTC/Zulu time to the TAF display page. Again, the TAF data originates in the Garmin Pilot app.

With the Connect IQ utility, you can download different watch faces, including a logo that represents the brand of aircraft you fly. Cheesy? Yeah.

Changes made from software version 2.50 to 2.60 include support for Apple Media Service. This enables the control of any active music player (Spotify, as one example), including volume adjustments. You can also receive text and email messages when connected to a smartphone—something I found useful.If you use the watch when flying a jet, the update supports speeds up to 990 knots. One thing that bugged me was the watch measuring nautical units (instead of statute miles) for non-flying activity summaries. Version 2.60 fixes that.

The D2 Bravo turned out to be a rugged daily watch for me and I especially like the sports functions when traveling because I don’t have to bring along my cycling computer or Forerunner sports watch. The Titanium is even better because of the integrated heart rate monitor, but it’s heavy on the wrist. Both models come with interchangeable bands for use during sports. I kept the black plastic sports strap on the Bravo because it’s comfortable—and more my style than the brown leather one.

Garmin Pilot app users will likely get the most aviation utility from these watches. On the other hand, I’m a Pilot app user, but just find it easier to focus on the data within the app instead of on the watch, including METARs. I did make good use of the Garmin VIRB action camera interface. Whether on the bicycle, motorcycle or in the airplane, the basic camera controls made it easy to start and stop recording when I couldn’t easily get to the camera. Software version 2.7 is required for the newer VIRB Ultra.

In basic watch mode, the Bravo’s battery is good. Expect a couple of weeks endurance—and more from the Titanium. Battery life is shortened considerably when using any of the wireless functions.

A couple of nits come to mind. It might not matter much to the average user with only one D2 watch, but I had fits whenever I had to charge these two watches because the charging cradle for the Titanium and Bravo are slightly different.

I’d like to see the wireless interface expand to panel navigators and perhaps other tablet apps. For those not using an app, a better basemap could step the interface up a notch.