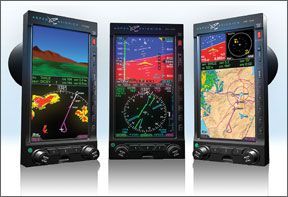 You cant imagine how difficult it is for us to keep a straight face when we ask a company for an estimated delivery date of some new airplane or widget. We dutifully report what these companies tell us and when theyre out of earshot, we allow the sniggering and eye rolling to begin unabated.

But there are exceptions. Some companies do what they say theyre going to more or less when they said they would. One of these is Aspen Avionics, which we are selecting as our company of the year. Its not that Aspen has never let a schedule slip, but that in its competently designed aftermarket EFIS systems, Aspen has done just what it said it would: delivered high-quality, flexible and reliable glass systems that many owners can afford.

Moreover, they have supported the installation of these products with good customer and technical support. We dont hear complaints about Aspen and believe us, we go looking.
So Aspen gets Aviation Consumers 2010 nod for the top company and top product of the year. For more, see aspenavionics.com

Damn it to hell, we like these airplanes. The problem with many LSAs is that they feel…cheesy. In order to meet the weight restrictions, structure is reduced to the minimum and

theres weight reduction at every turn.
But the Legend Cubs feel more like genuine Piper Cubs because, well, they sort of are. But they have improved construction methods, two engine choices and the build quality is simply second to none, in our estimation. When we go to shows, we always sign up to fly them for editorial review. But really, its just for the fun of it. See more in the April 2010 issue or at legend.aero.

Youre surprised? Like clockwork, Garmin seems to roll these things out at least once a year and we seem to beat the hell out of them and find that they work just fine. The aera line is unique because it is a line-four models are available-but its also Garmins first stab (a little inside GPS article humor there) at an aviation touchscreen.

What impressed us most about this product intro is that Garmin resisted the inevitable urge to trash the thing up with a lot of menus and capability that the processor and memory could probably support but that users dont need. Its kept to a simple, easy-to-use operating structure that anyone can learn. See the December 2009 issue or garmin.com for more.

MOD Of The Year:
Next Dimension SR22

Theres a reason the Cirrus SR22 is a top seller. Its fast, fun to fly and nice looking. Cirrus got the airplane so right from the start that it hasnt seen a big mod market.

But the one mod that caught our eye is Next Dimensions major redo of the SR22. In case you havent noticed, the market is flooded with recent model SR22s at good prices. NDs mod fits them with a Tornado Alley Turbo normalizer system plus Avidynes Release 9, which we picked as our top EFIS last year. An upgraded interior and paint comes with the package.

Bottom line: A helluva airplane for well under the cost of a new one. We havent flight tested one yet, but were on the list. For more, see the January 2010 issue or ndaircraft.com.

Electronic Flight Bags are a bit of a misnomer, since they dont actually displace a real flightbag. But they do carry plate readers, chart libraries, flight planners, utility programs and weather access, so they earn their keep. (No fuel strainer, sorry.)

Our top pick in our April 2010 review was Chartbook from flightprep.com. Ease of use, range of features and a bright display running on a solid CTL 2Go NL1 tablet PC made this product rise to the top. FlightPrep offers a range of related products.

Even if you have a recent audio panel in your airplane, you probably need a new one. Thats because youre carting around an MP3 player or a portable DVD and you need to play good quality stereo music. An old KMA24 wont do that.

But PS Engineerings slick PMA8000 series will do the job nicely and one version even includes a Sirius Satellite Radio receiver complete with remote control. In a market dominated by Garmin, PS Engineering continues to innovate

and keep its competitive edge. So were happy to tip the hat in their direction. For more, see ps-engineering.com or our review in the August 2009 issue.

And it may be Austros name on the door, but Diamond principle Christian Dries is the man responsible for pistol whipping a new diesel engine through certification in under 24 months. Diamond stubbed its toe badly with the Thielert (now Centurion) engines in the popular DA42 twin. But rather than retreat and regroup, Dries doubled down, finding $61 million to invest in a new diesel developmental project, plus the factory to build it. Its too soon to judge the engine-

although we reviewed it in the July 2009 issue-but we think Dries deserves recognition for absolute Cargnegiean confidence and bravado. You just dont see that much anymore. Try diamondair.com for more.

We have seen ugly and it is the underside of a Cessna 182 that hasnt been washed in a year. There are dozens of cleaners to blast the grime loose and we tried most of them.

All of them work, but some work a little better and they would be Arrow-Magnolias Fleet Wash and Simple Greens much touted Extreme Aircraft Cleaner. Both of these met our requirements for knocking the grease off without

requiring crawling under the belly and scrubbing. Some things just arent done, after all. Find out more in the May 2010 review and source from aircraftspruce.com. BEST planner:
voyager 4

Well concede that its a good thing that pilots actually tend to plan their flights rather than just kicking the tires and launching. And for that task, many pilots want a computer-based or online flight planning program. We tried them all-free ones and pay-per products-and we like Voyager 4 as the best does-it-all planning program. See seattleavionics.com for more and our January 2010 issue for the review.

Unless youre in a hurry, in which case the KANNAD Compact is the second choice, the ACK E04 is a best value. It has been delayed to market, but its strong featureset and favorable price make it our top choice.

The reality is buyers are dragging their feet on 406 MHz purchases, so we have no compunctions about recommending a product thats just coming to market as we go to press.
The hidden side of 406 technology is that it can be expensive to install. The ACK E04 is a reasonable all arounder. See the June 2010 issue or ackavionics.com.

As noted in this issues review of the Apple iPad, getting a plate reader right is no easy task. Thats because paper approach plates and electronic displays just arent meant for each other.

SolidFXs first try, the FX10, was a noble effort, but too big, in our estimation. The companys follow-on product, the FX8, gets it just right, albeit at a pricey $1195, plus the subscription costs.

But if you want a reader to do Jepp plates, this is the only game for now. As the iPad App Store rips into overdrive, we may see a Jepp app for that device. Until then, see solidfx.com.

When an engine comes due, the first question is where to get it overhauled. There are dozens of choices, but our surveys have consistently put one shop at the top: Zephyr Engines in Zephyrhills, Florida. But Penn Yan Aero and Poplar Grove are right behind Zephyr. What makes a good shop? Three things, really. Customer service, customer service and customer service. These shops have grown loyal followings because they take care of people who do business with them. Its that simple. See our March 2010 issue for the full survey and more

With EFBs and iPads, who the hell uses paper charts anymore? Not everybody, but most of us. But given how much we spend on data for boxes and navigators, theres a budget limit and one way to stay under it is to use Air Charts. This system repackages the public domain FAA AeroNav services in a compact set of atlases. The approach plate booklets are updated via a periodic sheet rather than having to deal with all that paper every 28 days. It just makes more sense and its cheaper. See our review in the May 2010 issue or airchart.com.