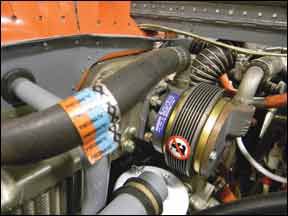 From the moment light singles started shipping with no pneumatic (vacuum or pressure) instruments, its been the dream of many an owner to yank out the maintenance-hungry vacuum pumps and replace the pneumatic instruments with electric ones. Doing away with pneumatics makes even more sense after a glass panel upgrade where the only item left is usually a vacuum-driven attitude indicator

doing duty as a backup.

A dry-vane vacuum pump with over 500 hours in service is of questionable reliability. Many pneumatic instruments last over 1000 hours, but thats the exception rather than the rule. There are also the filters to check and replace. Meanwhile, the mean time between failures (MTBF) of electric gyros with spinning components is many thousands of hours. For MTBF for digital “gyros” youll have to add another zero. Or two.

Theres nothing ignoble about keeping a pneumatic attitude indicator and pump after a glass panel upgrade. Its the cheaper option short-term and is probably cheaper even over the long haul. But when upgrading to digital primaries, its worth looking at going all-electric.

The first question is whether you can legally ditch the pneumatics. This is a multi-step process that starts with the aircrafts type certificate data sheet (TCDS). These can be downloaded from the FAA (http://snipurl.com/27u3bq).

If the TCDS specifically lists the pneumatic system or instruments, you have to keep them. Our search of several popular GA aircraft showed this was rare. One exception was the Mooney M20 series, where the vacuum pump is specifically listed, however, the TCDS was revised in December 2010 to include a note saying that the vacuum system can be removed if the attitude indicator was replaced with an STCd installation of a non-vacuum system and that the remaining vacuum system is no longer connected to any operational system. Peter Lyons, VP of product management and co-founder of Aspen Avionics, points to this as proof that, “The FAA has clearly recognized that vacuum pumps are going away and doesnt want to have barriers standing in the way.”

Another catch might be in the common TCDS phrase, “The airplane must be operated according to the appropriate AFM.” Many newer aircraft have a “kinds of operations” list in section two of the AFM (the Aircraft Flight Manual, a.k.a., the POH). A mid-70s Bonanza wont have this but if you wanted to remove the vacuum-powered attitude indicator from a G1000 Cessna 182 youd be out of luck. It specifically says the vacuum instrument is required for IFR.

Now heres a stumper: You get a great deal on an early Cirrus SR20 with its Rube Goldberg vacuum system and want to upgrade the whole thing to glass panel and

electric backups. The kinds-of-operation list doesnt require a vacuum system or instruments, but it requires a vacuum gauge. Can a gauge that always reads zero satisfy this AFM requirement? We have no idea.

Other catches might be in a minimum equipment list or if you need the pumps for pneumatic de-ice boots.

Finally, you must ensure the STC for the glass-panel installation doesnt require the original pneumatic instruments to be retained. Complying with FAR 23.1311 (a), the Aspen Evolution install requires standby attitude indicator with a separate power source (among other things), but it doesnt need to be original equipment. The Aspen install manual goes further to note “Removal of the pneumatic system is not authorized by this STC.” That doesnt mean its forbidden. It means youll need a separate approval-probably a Form 337-to complete the process.

When it comes to how much redundancy your new, all-electric setup will be, you have some flexibility. Step one is the STC. The Aspen install needs a second attitude indicator with a separate power source, as noted before, and that source must supply the system for at least 30 minutes. Keeping the vacuum-powered attitude indicator certainly qualifies.

FAR 23.1353 (h) says that any storage battery must supply 30 minutes of juice, so thats probably where their number comes from. A Bonanza we know that recently went all electric used the popular Mid-Continent Lifesaver with battery backup to meet this requirement. The $4867 unit claims 60 minutes of run time. (Tip: Get the $77 remote mounting kit so the battery can be put somewhere for easy access and replacement rather than mounted on the instrument back.) RC Allen and Castlebury also have qualifying electric gyros.

The Lifesaver has no STC for its installation, but its a fully-TSOd part, which makes it simpler to say it qualifies as “functionally similar equipment” under AC 20-41A. Because the instrument is probably installed in a different location than the old attitude indicator its replacing, youll probably need to submit a Form 337 or get a field approval. This is technically the installing shops call as to whether its a major alteration or not. So far, our sources say the forms arent getting kicked

back by Oke City, and the airplanes are returning to service vacuum free.

You have to read the fine print. Having a second Aspen display does not qualify as a backup attitude indicator, even though it has internal battery backup. Aspen is working on design changes to remove that restriction. The Garmin G500 installation specifies that any non-electric attitude indicator is acceptable for backup, but the only acceptable electric attitude backup is the Mid Continent 4300-2 or -4. That means you couldnt install a $15,000 L-3 Trilogy system that provides backup attitude, airspeed, altitude and (optionally) heading even if you want to. As an aside, the new Cessna Corvalis TTX uses the Trilogy, and is probably the first certified GA aircraft with no spinning-mass gyros at all, primary or backup.

An attitude indicator with electric backup sounds great, but youve got to think through the potential scenarios. The Lifesaver can run up to 60 minutes after total electrical failure, but a vacuum gyro can spin until you run out of gas. If total electrical failure means you also lost all navigation, then you must find VFR to let down and land. Attitude for 60 minutes might not be enough.

We think an all-electric aircraft must also have some backup navigator. This could be as simple as a portable GPS or even an iPad with good GPS-just enough to get you down to an airport in an emergency. The Aspen Evolution does have 30-minute backup power of its own (weve heard reports of it lasting twice that, however) and an emergency GPS. But thats only 30 minutes.

While it wouldnt be required, the open accessory drive vacated by the vacuum pump would be a great place for a standby alternator. This gives serious peace of mind in an all-electric aircraft that we could continue to the destination without losing the digital displays after an alternator failure. Even on a dark VFR night, you may wish you had more than even 60 minutes of attitude display. There are also pure battery backup systems, but practically speaking, wed lean toward the

second alternator, with a slight preference to the self-exciting type that dont require any outside battery power to work.

More robust would be upgrading to a full dual-alternator, dual-battery, dual-buss system. This complicates the install process and may mean more 337s or field approvals. A standby system with its own STC simplifies the process.

Because every one of these installs is different in the details, youll want to search for any single-point failures your reworking puts into the new layout. Youll also want to know cold the emergency process for the new instruments. For example, both the Lifesaver and the Aspen Evolution require you to push a reversionary button within 30 and 20 seconds of main power loss, respectively, to keep them running on backup power. The Aspen flight manual supplement also says that IFR flight when the backup battery is not fully charged is prohibited.

Going electric wont save you money. Moving your old instruments and replumbing the vacuum lines isnt free, but even worst case it shouldnt be more than $500 in labor. The standby attitude indicator with battery would be 10 times that in parts alone. Thatd buy a lot of pneumatic system repair.

While youre free from the procession of filter, pump and (probably) instrument replacements, the standby battery must be replaced periodically. Mid Continent told us their standby battery is expected to last three years and replacement is $400. However, once the switch to all-electric is made, maintenance downtime is probably limited to 15 minutes every three years to replace those batteries. No vacuum system can make that claim, even for just replacing the filters.

A logical question is whether theres value in taking out pneumatic instruments and replacing them directly with an electric attitude indicator and electric HSI as primary instruments without doing a glass-panel install. If the only pneumatic instrument on the aircraft was the AI and the maintenance was costing you money and downtime, it might be worth the $5000 install and periodic battery maintenance. To replace both an AI and DG, we dont think the numbers work. The electric AI and electric mechanical HSI (such as a Bendix-King KCS55A) would be around $9000. Thats equal to an Aspen Evolution Pilot install and within $5000 of the far more capable Evolution Pro.

The allure of familiarity may be the biggest hurdle in going all-electric. The Bonanza owner making the final design decision for his new panel realized hed lose the old vacuum-powered DG hed planned to put on the copilot side.

“Do I really want to do that?” he asked. The technician replied, “What are you keeping it for?”

The owner didnt have a good answer. Now the airplane is vacuum free.