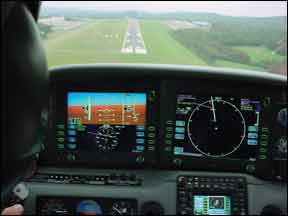 We’re a long way from every cockpit having some form of a glass panel, but we’re getting there. Aftermarket installations of products like Aspen’s Evolution and Garmin’s G500 are making inroads and as some airplanes head for the scrap heap (or Brazil), the percentage of glass cockpits slowly grows.

If you want glass, the cheapest, least painful way may be to simply shop the used market for the first airplanes that got glass panels, meaning 2003 to about 2007. These airframes have taken their predictable depreciation nosedive, but many of them are still a long way from the ratted-out phase. Early glass consisted of the Avidyne Entegra and Gen I of the Garmin G1000. These appear to remain supportable and our survey of owners on page 20 reveals that owners are generally satisfied with these products. We heard gripes, but hardly an overwhelming groundswell of bile and brickbats.

Market Shifts
Don’t look now, but the used aircraft market isn’t the stagnant, dismal backwater it was two years ago. Used sales have picked up and while the U.S. economy has been in the doldrums, other parts of the world—especially Brazil, where many select U.S. airframes are being exported—are doing just fine.

As a result, if airplanes were going for a song the last time we did this survey in 2009 (see April 2009 Aviation Consumer), they certainly aren’t now. The number of used Cirrus aircraft have diminished, Cirrus is building fewer new ones and demand is inching upward. The same thing has happened at Cessna. Mooney is in hibernation. What this means is that there are fewer choice airframes on the market, the ones that are out there will probably have more hours, more dings and a higher price. Says Jaime Steel of Steel Aviation, which specializes in Cirrus, we’ve quietly slipped into a seller’s market, at least a short-term one. So if you find an airplane you like and you float a lowball offer on it, don’t expect a call back. The seller will probably have two other offers. Herewith are comments on specific models:

Cessna
If you want inexpensive glass just for the sake of having it, a Cessna 172 may be the best place to look, with the Diamond DA40 as another option.  Although Cessna no longer manufactures to specific model years, its serial numbers do correspond to specific years and this is how buyers and sellers categorize the airplanes.

The models themselves don’t change much from year to year, but G1000 glass first appeared in 2004 in the 182 and the following year in the 172. The real volume for both started in 2006 forward. And once glass was available, everyone bought it. At the time, Cessna was building between 300 and 400 a year of both the R and S Skyhawks, and many of these went into flightschools as glass trainers.

And now, many of them are coming out of those same schools, as newer aircraft are brought on line. Two years ago, prices for these were soft and we saw a few with highish time selling for as little as $150,000.

Now, not so much. And especially not Cessna 182s. Demand for these airplanes is rising and prices are hardening. “All these buyers are looking for the same thing: no hours and rock bottom prices,” says broker Todd Huvard of AircraftMerchants.com. “At a certain point, the supply of those low-time airplanes dried up and the people that had to sell because of the recession were shaken out of the market.” What’s left is more customers looking for fewer desirable airplanes facing sellers who want higher prices, but who don’t really need to sell. The effect on prices is obvious. The fact that Cessna is making fewer 182s and selling them at higher prices puts more upward pressure on used sales prices.

Diamond
Diamond’s DA40 has been the company’s best seller, with nearly 1600 in the field, including some diesels in the European market. It was an early convert to EFIS, offering the Avidyne Entegra suite in some models as early as 2003. We aren’t sure how many of these were manufactured, because in the following year, Diamond switched to the G1000, adding more features as such as XM weatherlink, traffic, TAWs, WAAS and synthetic vision by 2008.

DA40s in the 2003 model year sell for as little as $125,000, according to Bluebook data, but we’re not clear how much an Avidyne system adds to the value because there are just too few out there to judge sales.  We found one 1200-hour example on Trade-A-Plane for an asking price of $140,000. If the sale price is 10 percent less, that’s $126,000, an excellent value. The Entegra is still supportable, although its long-term future is not as certain as the G1000.

Later model G1000-equipped DA40s seem to sell in the $150,000 to $170,000 range, depending on hours and engine time. The bottom end of that scale may represent the cheapest buy-in for any kind of glass, short of aftermarket conversions such as Aspen’s Evolution system or the Garmin G500/600, which doesn’t appear in recent model used aircraft.

The DA40 has another advantage to buyers on a budget: Like the Skyhawk, it’s cheap to operate and with a low loss rate, cheap to insure. The 180-HP Lycoming IO-360 has an excellent service history, sips gas and the airframe itself is relatively free of expensive foibles.

Columbia/Corvalis
In the Columbia line, which became Corvalis after Cessna bought it in 2008, the best deals on glass are to be found in the 2003 to 2007 model years. These airplanes are equipped with the Avidyne Flightmax Entegra with the EX5000 large-screen multi-function display. This system is driven by a pair of Garmin GNS430s with a Garmin GMA340 audio panel and a GTX327 transponder. S-TEC’s System Fifty Five was the favored autopilot and after a rough spot in support, we see these APs as well supported. There are two Columbia models, with the 400 being more numerous than the 350.

However, worth restating is that Bluebook numbers may be behind the market and all of the brokers we spoke to reported that sales activity and demand is picking up or, at minimum, reaching a plateau.

The turbocharged 400 was a far more popular product, with about 400 manufactured, beginning in 2004. They have the same glass as the 350 and the same autopilot. Prices range from $280,000 to $330,000 for the 2007 model. Again, we think the best value is probably the 2004 model year. It doesn’t sell for much more than the normally aspirated version, but it has considerably more capability. One factor that will tend to harden used prices on this model if not even elevate them is that the replacement for the Corvalis 400 is the Corvalis TTx, which Cessna has moved upscale. Way upscale. At $733,000, the TTx will be well north of the Cirrus and probably the Mooneys, if that company returns to production.

Three years later, it’s different. “Cirrus prices have gone up in the last six months, really due to production being down, I think,” says Jaime Steel. “It used to be an inventory of 200 used airplanes, but right now we’re running about 150 to 160 active used airplanes for sale,” she adds. That sounds like a lot to pick from, but between 2004 and 2006, Cirrus was cranking out the airplanes, so those model years are saturated. There are far fewer in the 2003 model year, thus prices aren’t as soft. Still, says Steel, a decent 2003 model can be had for between $175,000 and $190,000, a good value against a new price of well over $600,000.

Depressed production numbers are putting price pressure on more recent models—between 2008 and 2010—leaving more wiggle room on price in earlier years. But not much. Best value in Cirrus glass?

“The market has flipped. I have people fighting over airplanes right now. I have multiple offers on airplanes,” says Steel. Some of that may due to year-end tax rush, but demand is clearly up, so buyers need to be realistic about price offers.

Mooney
Mooney waited until Garmin’s G1000 was fully developed before going with glass in 2004 with the Ovation 2 GX and Bravo GX. In 2006, it added a new model, the turbocharged Acclaim, which was also G1000 equipped.

As with the Columbia, the best deals are in the early years, with the Ovation selling competitively with the Columbia models for prices between $280,000 and $300,000. The Ovation sold well and there are quite a few to pick from. Less so the Bravo, which actually seems to retail for more money (more than $300,000) than the Ovation, but its Lycoming TIO-540 was never one of our favorite turbocharger installations.

The Acclaim may be the best performing of all the Mooneys equipped with glass, with even the 2006 models selling for $400,000 or more, we don’t see them as quite the value as the Ovation, unless you need turbocharging. A slightly older SR22—say 2004 or 2005—might be more airplane for a little less money, in our view.