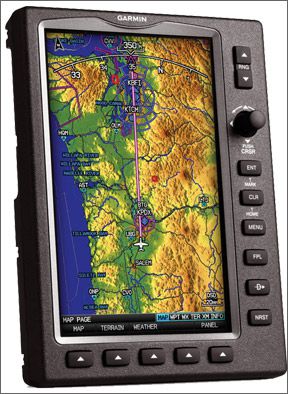 Although theres plenty of portable GPS out there, the market isnt as competitive as it once was, with Garmin dominating…well, the world. Two of the hottest products are both from Garmin, the GPSmap 696 and the aera series, Garmins first aviation touchscreen.

These represent a conundrum for buyers in that they have nearly the same capability, but at different price points. And “nearly” isnt the same as “exactly.” The 696 has some features the aera doesnt and vice versa. One outlier in this

equation is whether Apples large-screen iPad can step in for either one of the Garmins. Weve been asked this, so were examining in it in this article. The quick answer is the iPad isnt a replacement for the 696, but, as with the aera, it does some things-a lot of things-that expensive GPS cant.

Size is the Thing

With an intro price of $3295 (now discounted to below $3000 at the major outlets), the 696 was (and is) Garmins most expensive portable. If it had in mind an EFB-wannabe, the 696 has evolved into that niche, even though it doesnt do third-party computing, as some EFBs do.

All of Garmins recent portables have included named approach fixes, but the 696 was the first to include an actual chart library, using the FAAs AeroNav plates. The 696 also displays jet and low-altitude airways. If thats beginning to sound like the 696 is optimized for IFR, thats exactly what it is. Weve heard from a number of pilots and commercial operators with 696s semi-permanently mounted as navigators and/or flight libraries. Other GPS products have this feature, too, including Bendix/Kings AV8OR and Anywhere Maps ATC. At the expense of larger size and weight, the 696 allows full view of the chart and, more recently, geo-referencing of the aircraft position on the plate.

We just said the size and weight were a disadvantage, but is that fair? In a large cockpit, where the 696 is permanently mounted, the weight wont matter and the size will be a plus. In a tight cockpit like a Diamond DA20 or an older Mooney, the 696s 5.7 by 7.7 inch overall size is yoke mountable, but some will find it a push to do that. At 2.2 pounds, its a heavy lump on controls you want to be able to move without restriction.

The payoff is a large, bright screen thats 6.1 by 3.75 inches and 480 by 800 pixels. The screen is a backlit LCD and about as sharp as any portables, although the iPad bests it. It runs warm and can be a power hog, thus the 696 is best run on ships power. At reduced brightness, it will operate for up to eight hours on the internal battery, so theres no worry about the 696 coming up short as a backup. With the XM receiver plugged in, battery life is under three hours. (The GPSMap 695-sold without XM-retails for $2895 or $2395 discounted. Its a good choice if you already have a weather source.)

Since it owns the GPS portable market, Garmin surprised us by following the 696 with a new line of products-the aera. There are four models in the line ranging from the $875 500 to the $1649 550. (See the chart for discounted prices.) This complicates both the basic choice and the comparison against the 696 because the price variation is more than $2000 from lowest to highest.

Just to keep things simple, all the aera models have the same hardware, same basemaps and same navigation database. The two lower models dont have the detailed high res terrain, AOPAs airport directory or the SafeTaxi ground tracking feature. None have Garmins FliteCharts, a significant disadvantage for some pilots. Two aeras-the 510 and 560- have XM weather capability, the other two dont. All of the aeras are shipped with ground nav capability for the U.S. and Canada, but only the two top models are FM ground-traffic capable. The 696, by the way, doesnt come with the road maps and it wont do FM traffic.

Next to price, the next major point of departure is size. Overall, the aeras are 5.3 by 3.3 by .9 inches-about 60 percent smaller than the 696. The display measures 3.8 by 2.2 at 480 by 272 pixels. Plan on smudging that crisp display with your greasy fingers because the aeras are touchscreen controlled, compared to the 696s keys, rockers and a joystick.

In our view, the right way to look at this analysis is to compare function first, then price. You can decide whats important, then dicker with yourself on how much youre willing to pay. (You can dicker on ebay, too, as these products occasionally show up used.)

Both have essentially the same WAAS-capable GPS engine to deliver nav data to a functional display. Beyond that, the similarities are less intertwined. The 696 has a larger and more flexible moving map, although its not necessarily more detailed.

It can be highly customized to show just the map or the map combined with Garmins flight panel page that shows aircraft attitude and performance through GPS-derived data or various combinations. Data fields can also be customized. The 696s joystick/cursor knob scrolls through the map, waypoint, terrain and XM choices. Scale selection is via a range rocker.By comparison, the aera has similar maps, but to step through them requires an excursion through the home key. The choices are map, terrain and the HSI panel. As with the 696, you can customize data fields and detail level, but you cant split the screen, with the panel page on top, say, and the map on the bottom. Its just not large enough. Two in/out virtual keys do the scaling.

The aeras arent just the previous navigators with touchscreens instead of knobs. They work differently, having more in common with computers and smartphones than panel or even previous portables.

The aera map page has only four virtual keys: the two scale keys, a menu key and the home key. The menu key is for customization and settings, the home key to step through a dozen options of various kinds. These are logical and easy to master even without the manual. Its just simpler logic than the 696. The touchscreen itself works well, but can be dodgy at times, requiring two or three stabs to get the command. (The iPad is just the reverse-it accepts unintended commands.) For waypoints and other data input, the aeras have a generous virtual keyboard that makes data input less tedious than with the 696s knob/joystick, but the joystick yields fewer errors, in our experience.

The 696 sports 12 keys, seven dedicated and five soft keys whose functions differ with the display mode selected. We hadnt used the 696 in over a year and were pleasantly surprised at how much quicker it is to navigate some functions than the aeras are. Theres no need to double or triple tickle a stubborn key and you dont have to step back through the home key for function changes.

Here, the two have similar capability-to a point. The 696s flightplan logic is like the 430/530 panel navigator in that you string together a bunch of waypoints in the active plan, then fly it or save it for later. Waypoints can be scrolled in or selected off the map by slewing to them with the joystick. Approaches are complete with all named fixes.

Both the aeras and 696 access the flightplan function through a dedicated key, but the aeras handle waypoint insertion a little differently, requiring a menu step if the navigator already has an active flightplan or waypoint. Waypoints have to be typed in, you cant insert them by scrolling the map. But you can insert a named approach, with the option of entering at an initial approach fix or vectors to final. Both units store flightplans in a bin listing them by name, where they can be edited or reversed.

On this count, the 696 excels, thanks to its preloaded Garmin FliteCharts, which cover the entire FAA AeroNav library for the U.S. At full scale, the 696s screen is too small to show the plates in detail, but theyre readable. You can scale up and scroll the plates to see the finest detail. Garmin just added standard geo-referencing of aircraft position on the plate and this is available as an upgrade for older 696s. If you prefer Jepp charts, the 696 will also run ChartView.

No such features are found in the aera, which nicely displays approach fixes, but no approach plates. However, both the 696 and the aeras display low and high-altitude airways and fixes, but neither allows naming airways in a flightplan. That remains the province of panel-mount navigators.

All contemporary Garmin products since the GPSmap 396 have excelled at hazard warning and avoidance. The 696 and aera continue this capability. The 696 and aera 510 and 560 accept XM WX Satellite Weather through a remote receiver; the lesser models dont.

Again, there are differences in display. The 696 has a fully dedicated page for the weather, which is handy for looking at detailed NEXRAD imagery; its just much easier to see the details. Punch the cursor knob and you can scroll through full pages of satellite mosaics, METARs, winds and so forth.

To do the same on the aera, step through the home key to the weather key, then select the same products for a more detailed view. The detail is there, but not nearly so easy to read as on the 696. Terrain is similarly handled. Both navigators allow setting up terrain alerts based on look-ahead time, desired buffer and alert sensitivity. The 696 and the two upper tier aeras have high terrain resolution while the other models have standard resolution. Either will keep you out of the rocks if youre paying attention.

What to do here? A clear-cut yay or nay is difficult because the decision is driven by how and what you fly. The 696 occupies plenty of upper tier cockpits where its valued as an EFB-were thinking high-dollar singles, twins and turbines whose budgets allow for add-on gimcracks that arent necessarily primary equipment.

If that doesnt describe you and youve got a good IFR panel mount, the 696 can serve as backup nav, plus a chart library. If you want just the charts, the iPad with ForeFlight or WingX (or any of several chart readers) will be cheaper and easier to keep current.

As you can see from the foregoing, the 696 is optimized as a serious IFR tool. If thats not what you do, it will be overkill, considering the high price. Otherwise, either the aera 510 or 550 get our top recommendation. Both are XM weather capable and have all the basic navigation features-plus the hazard warnings-that anyone could want.

By dint of size and standard onboard map databases, the aeras are also good street navigators, so you can find your hotel in the rental car. At that task, the 696 falls short. In a future issue, well compare these products to other market options.