Home Industry News How the Jet Guys Did It (A New Fuel, That Is)
Print
Email
Facebook
Twitter 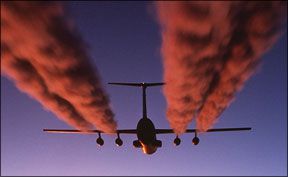 Money talks, goes the standard street wisdom, and [expletive of choice] walks. That more than anything describes the state of play when comparing the alternative jet fuel industry to the rather more stalled effort to find an unleaded

This should be no surprise. Thanks to serious industry support from the military, turbine engine manufacturers, the airlines and even the FAA, the alternative jet fuel industry is on a virtual gallop to have in place the regulatory approval standards to allow use of bio-derived or synthetic jet fuels by next year or at least 2012. The economics remain untested so far, but the regulatory hurdles havent proven as difficult or at least as time-consuming as they have for finding a 100LL replacement. Is there a lesson here?

Two forces are pushing the alternative jet fuel market-petroleum price volatility and related worries about peak oil and concern about emissions, mostly carbon dioxide. National security concerns-an always-reliable means of priming the money pump-are a third factor, thus the U.S. Air Forces interest in alternative fuels has lent a credibility and urgency to the project that has no current equivalent on the aviation gasoline side.

Further, the Energy Independence and Security Act of 2007 requires federal agencies to buy only fuel that has equivalent or lower life cycle carbon emissions as current petroleum fuels. The Air Force is hoping bio-based or synthetic fuels will help with that and the airlines are equally concerned about carbon footprints.

To make all this happen-which it has with remarkable speed-the industry formed the Commercial Aviation Alternative Fuels Initiative (CAAFI), a working group consisting of FAA staff and representatives from the engine and commercial aircraft manufacturers, with help from the budding alternative fuels segment. On the avgas side, the rough equivalent of this is the Coordinating Research Council, a non-profit council composed of petroleum and automotive technical representatives. The CRC has had a standing committee examining avgas replacements for years, but it hasnt produced much of substance. Its recent report was largely a summary of past findings and a restatement of the challenge.

Neither CRC nor CAAFI are actually responsible for developing fuels, but rather greasing the skids to get consensus specifications developed and approved so industry can attract capital to produce the fuels.

However, there are key differences between these two groups. CAAFI has the imprimatur of existing legislation, a strong push from monied defense interests and high horsepower influence of companies like Pratt & Whitney, GE, American Airlines and Boeing, whose lunch accounts exceed the entire R&D budgets of Lycoming and Continental combined. Its not that these companies contribute funds directly, but in kind, through staff time and resources. The airlines alone represent a powerful interest block, says Rich Altman, CAAFIs executive director.

CRC, on the other hand, has worked uncertainly against no stated date or regulatory hardpoint for the elimination of lead in avgas. Efforts to eliminate lead have been on-again, off-again, so theres simply been no urgency. Although some military drones use avgas, compared to jet fuel, theres little military interest in it and in contrast to jet fuel, the piston engine bio- and alternative fuels market is a flyspeck. CAAFI lists some 37 companies in the alternative jet fuel market and the field is relatively rich with research dollars.

On the avgas side, only Swift Enterprises has a high profile project, but at least one other company is exploring the field. Given that aircraft piston fuel demand is in decline, attracting investors will be a challenge.

And what has CAAFIs high-profile work accomplished? A lot, actually. Although it formed only in 2006, CAAFI has overseen the development of a new jet fuel spec, ASTM D7566, which approves jet fuels derived from synthetically processed hydrocarbons. Still on the table before ASTM is an annex to this specification for fuel made from bio sources such as cellulosic plant matter-so-called hydrotreated renewable jet fuel or HRJ. But CAAFI expects that approval sometime in 2011, which will remove any serious regulatory barriers to using alternative jet fuel.

And this isnt just a lab experiment, either. The turbine world has ambitious plans for alternative jet fuels. By 2017, the Air Force would like to have half of its jet fuel derived from synthetic or bio sources. Some of this may be HRJ, which a number of companies are pursuing. But synthetic paraffinic kerosene (SPK) refined through the Fischer-Tropsch process the German military used during World War II is also a possibility. The Air Force is well along with extensive testing in this arena.

None of these processes are ready to be fielded on an industrial scale yet, but CAAFIs Altman told us that once the ASTM approvals are in place, they may become economically practical more rapidly than many people realize.

On the HRJ side, says Altman, the economics are determined almost entirely by cost of the biomass feedstock-harvesting it and delivering it for processing.

Two business models have been proposed: One would consist of standalone refineries dedicated to biofuel production similar to the ethanol economy; the other would comprise “bolt-on” additions to conventional petroleum refineries in which the synthetic output would be just another refinery stream for blending.

For the scales envisioned to meet the Air Forces ambitious goals, Altman thinks both government seed money and large investment by the private sector will be needed to get HRJ and syn fuels launched. But before that can happen, the ASTM approvals have to be in place.

If this sounds like a familiar refrain, it ought to. On the avgas side, the very same struggle is underway to develop a 100LL drop-in replacement. The fact that CAAFIs success was driven in part by an airline industry saying in unison, “we want this stuff” hasnt been lost on Lycomings Michael Kraft. Hes been arguing for a year that no one will invest in bringing a replacement avgas to market until and unless theres a clear, unambiguous demand for it. For jet fuel, the airlines (and the military) did that, but piston GA is still arguing about octane. The two apparent leading contenders for replacing avgas-Swift Fuel and General Aviation Modification Inc.s G100UL are now before the ASTM for consideration.

Altman concedes that the ASTM process is time consuming and can be tricky, requiring unanimous consensus for everything. Conflict of interest is always a possibility because ASTM committees are often composed of technical people from companies who are asked to approve products that might be competitive with their own. That was true for the jet fuel specs, but Altman says the airlines had enough clout to force ASTM to confine objections to the purely technical, not the potentially competitive, which is what its supposed to do.

But ultimately, demand more than anything else, says Altman, made the jet fuel specs happen quickly if not painlessly. “You have to have a strong, focused buyers group willing to act together,” he says. “The airlines have done a terrific job of that. Its something you wouldnt have expected, but theyve made a very determined play and it made a huge difference.”

Maybe if consumers of avgas for piston engines do the same, well see similar results.