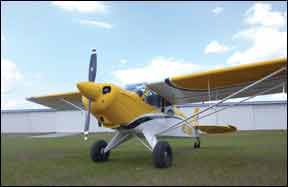 When we speak to companies that build new utility airplanes—CubCrafters, Champion, Maule, Aviat and the like—we’re often told that buyers tart the things up with every feature imaginable suitable for jaunts into the bush. But do the owners really fly into remote mountain strips and river sandbars? Some do, but they’re just as likely to hangar the things in Houston or Kansas City and use them as fun flyers.

We’re sure that comprises at least half of the market for the Aviat Husky A-1C, which comes as close to a new hardcore taildragging bush airplane as we can imagine. Other models from Maule and Champion, for example, have similar appeal, but Husky may reasonably claim the best combination of speed, range, carrying capability and options.

And let’s address the perennial complaint we get every time we cover the Husky:  It’s just an overpriced Super Cub. Perhaps so, but a new certified version of the Super Cub is no longer available, although CubCrafters can sell you a rebuild that they say is as good as new.

But new is new and that’s where the Husky lives, with Aviat selling about 30 to 40 airplanes a year, according to the company.

Sport Heritage
Aviat emerged from Christen Industries which, during the 1970s, made a line of accessories for the sport market, including inverted systems, fuel pumps and harnesses. It evolved into experimental airplanes, first with the Christen Eagle, which earned a reputation as being one of the most competent kits available at a time when other kits were anything but.

In 1982, Christen bought the type certificates for the Pitts line and began manufacturing it. The Husky developed because Frank Christen saw a market for a new utility airplane, but came up empty-handed when he tried to buy the rights to the Piper Super Cub, the Champion line and Interstate/Arctic Tern. So he designed and certified his own, which appeared as the Husky in the 1988 model year.

Christen found moderate success with the airplane, given the sharp sales limitations of the day. Over the years, the model has evolved and been steadily improved. The A-1A in 1999 got a 90-pound weight increase to 1890 pounds, while the A-1B was certified at 2000 pounds.

The latest model and what we flew for this flight trial is the A-1C. Although it’s essentially the same airframe as the first airplane, there have been changes. In 2005, the model—then still the A-1B—got a new wing and with the C model for 2012, the gross was upped another 50 pounds to 2250. That gives it a useful load of about 900 pounds.

So with full fuel (50 gallons) it can easily carry two heavy people and a lot of stuff—just what’s wanted for buyers who like to head into the outback for some fishing and hunting and who don’t want to leave the six-person tent and cappuccino machine in the hangar.

Although Frank Christen and his designer/engineer E.H. “Herb” Anderson Jr. created the design, it was carried on when Christen sold the company and it was eventually renamed Aviat. Today, the company makes the A-1C and both the Pitts and Eagle aerobatic biplanes.

Traditional Design
In a world of slick glass airplanes, the Husky remains a rag-and-tube throwback, albeit a modern one. Like its contemporaries, the fuselage is made of welded 4130 tubing that runs the full length of the airplane, as with a Super Cub. Similarly, the gear legs are of welded tubing and covered in the same synthetic material used in the rest of the airplane.

Taildraggers of this ilk usually have looped bungees around robust steel lugs to help the gear absorb the bumps and while this nicely protects the structure from damage due to hard touchdowns, it also imparts rebound energy to the gear if the touchdown occurs beyond a certain rate of descent. That’s why in a three-pointer or a wheelie, the airplane will bounce enthusiastically if the touchdown descent rate isn’t near zero. If the touchdown speed is a little too high, the bounce will only get worse.

Aviat tackled this problem by attaching a couple of race car-style shock absorbers at the top of the gear structure oriented to absorb vertical loads. The shocks are inside the belly and thus not visible. They can be accessed from inside the airplane by removing the teak and holly floorboards or by unscrewing a metal belly cover.

Speaking of inside, the A-1C is a bit wider than a Super Cub and certainly more luxuriously appointed than an older Cub. The seats are well padded with plenty of legroom in both the front and the back. The seats are fixed, but have different cushions to adjust ride height. The airplane has modern toebrakes and very good ones at that. If you get a little too jiggy, you can lock the wheels and nose it over.

Since the cabin is one person wide, the panel is similarly narrow so it has just enough room for sufficient instruments for legal IFR flight, a moving map of some sort and more additional stuff than you might imagine. For instance, the panel can accept a Garmin G500/G600 along with the GNS430 navigator and an RDM-930 large-screen engine monitor. If you’ve got the budget, you can trick this thing out to be a sublime bush flyer.

Aviat has dosed the options list with a number of utility features including three sizes of Tundra tires up to 31 inches, amphibious or straight floats from Wipaire and PK, fixed and retractable skis and an Airglas belly pod that helps with the fact that you’re more likely to bulk the Husky out before you reach its gross weight limit. Another option we like is a removal hatch that allows access to a turtledeck baggage area suitable for long items. It’s not big enough for a match set of golf clubs, but tent poles and fishing rods will slide right in.

Flying It
In flight demoing modern taildraggers, we’ve noted one thing: They’re still taildraggers that require the same technique you’d use in an original Cub. But certain refinements make things easier. Getting in may or may not be one of them. On Tundra tires, the Husky is tall and this requires a butt-across-the-threshold ingress followed by hauling yourself up using the downtubes for purchase. It’s a practiced maneuver, but this is certainly no Cirrus. Once you’re in, the perch is lofty and comfortable. Soloing is from the front seat and unlike older taildraggers, you can just see over the cowl during taxiing so you might need an S-turn now and then, but not constantly.

The Husky levitates from the runway like an airplane that’s either lighter or has more power than it in fact does. It’s not CarbonCub-take-off-in-its-own-length performance, but the tail comes up quickly and the lightest tug gets it rotated. With two people aboard and three-quarter fuel, it climbs at 800 to 1000 FPM without heroic effort or a blind deck angle.

Handling is what you’d expect except for the roll rate, which is quite high for a highwing taildragger, the result of the 2005 wing mod that gives the ailerons longer span and deeper chord.  Earlier models had aileron spades, but they are needed now.

The Husky’s trim is a bungee tension type via a wheel on the sidewall. Two things about that trim: The wheel is a bit of reach back from the front seat, which we didn’t like much, and slight adjustments take big bites of trim, which we did like. The airplane trims up hands off quite readily.

Stalls clean and with flaps, straight and turning revealed nothing unusual. The moment of truth: How does it land with those shock absorbers? Without trying, we bounced the first three-point attempt and expected the usual kangaroo hop with the stick back to arrest the energy. But there was no second bounce. It settled onto the runway with no further drama. Aviat’s Larry Schlasinger told us the shocks definitely do tame the bounce, but with no basis of comparison, we have to take him at his word.

For cruise speed, the Husky does about 108 knots on 9 GPH or so, with either the parallel valve or the angle valve. With 50 gallons aboard, it has an easy 4.5 hours of endurance.

Conclusion
We think the Husky is what readers have always told it is: An honest airplane, with good flying qualities and a good combination of performance and payload.

It’s neither fast nor slow, but in that Goldilocks range of having enough speed to do 300 or 400 miles without torturing the occupants and plenty of fuel to do it comfortably. Ergonomics are good, with decent seats and good ventilation.

Pricewise, compared to other airplanes of its ilk and new airplanes in general, it’s a fair value. A late-model Super Cub (early 1990s) costs nearly $100,000 and won’t be lavishly equipped. A fully decked-out Husky will invoice for $250,000, but will have more factory features and options, especially for the back country flyer who might want floats or skis.