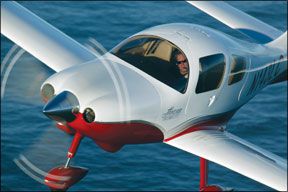 an airplane isnt what it used to be. Or should we say, operating one isnt. Given the cost of avgas, sole ownership looks less appealing than it once did and multiple-owner partnerships and fractionals look more attractive than ever. So do flying clubs, which split ownership among many and further reduce individual costs. But the problem with flying clubs is similar to renting. The airplanes probably arent the newest and pilots who own a tenth or a twentieth of an airplane arent likely to have much pride of ownership and the clubs airplanes may reflect that. But what about combining the fractional idea with the economics of a club? Thats the idea behind iFly, which launched a little over a year ago. iFly is basically an

exclusive flying club that asks what fractionals ask: What if you could have all the benefits of ownership, but none of the hassles?

A unique approach by the people at iFly matches aircraft with members, which is to say that at no time during a five-year membership will the ratio of members to aircraft be greater than four to one. And the aircraft will always be a Columbia 350, although not necessarily the same one.

The iFly idea builds on what fractional owners and operators have always understood: The real variables are your interest in flying versus your interest in the joys/nuisances of owning and the interest (or enjoyment) you might derive from your money if its not wrapped up in an airplane.

Like a conventional fractional, you buy into iFly on a share basis, but youre not buying a share of a specific airplane or even a share of a fleet, but shared access. Here are the numbers: The flat buy-in membership fee is $39,900, monthly dues are $1795 and hourly fees are $70 (dry) for access to new Columbia 350s. There are no extra fees for avionics subscriptions, reserves or insurance.

The $39,900 buy-in has a five-year duration and is a wasting asset. When the five years runs out, the member can re-up or walk away with no material possessions to show for it. (Traditional fractionals depreciate the buy-in share and pay the owner back some portion of his original investment.) During the five-year period, the member can opt out at any time and as long as he or she provides several months notice, a pro-rated refund will follow.

It bears repeating that membership does not buy you a share in an aircraft, it buys you access to a fleet. Currently, iFly is slated to populate Van Nuys, Santa Monica, Torrance, Long Beach and Orange County airports in the Los Angeles area and Carlsbad in northern San Diego.

Any aircraft can be moved by iFly between any of the six airports as warranted by demand. In other words, if each of three members at Santa Monica want to fly on the same weekend and only one aircraft is based there, iFly will relocate other identically equipped Columbia 350s from neighboring airports as available to meet the demand.

As with other fractionals, iFly members have everything taken care of for them-no

hassles with scheduling an annual, maintenance or updating the GPS databases. While iFly members wont ever be able to leave their flight bags in the airplane between trips, theyll be less likely to be grounded for surprise maintenance. And theyll never have to clean the airplane or even push it into a hangar. All of thats covered under the monthly fee.

Each month, each member is granted seven days that can be scheduled up to one year in advance. That includes five weekdays and two weekend days per month. That and all other scheduling is managed online -first come, first served. The company predicts (and our review of 1/4 fractional ownership seems to support) that scheduling conflicts will be rare.

Our previous investigation into fractional ownership (see June 2006) found that when eight owners have four airplanes to shuffle around, there are virtually no conflicts. iFly says when demand exceeds its three-to-one ratio, a new aircraft will be added, which may imply a scheduling conflict scenario similar to the fractional eight owner to four aircraft “virtually-no-conflict-scenario.” For the record “virtually no conflicts” translates to about one a year, which is probably reasonable considering the complexity. iFlys geographic limitation for its fleet may obviate even that.

iFly believes the money you spend that isnt directly related to the cost of flight would be similar to the amount youd lose to depreciation if you actually owned a new aircraft yourself. This may or may not be true, depending on what aircraft you buy, when you buy it and how you set up your ownership structure. We think the single best way to evaluate aircraft ownership is on an annual basis, not an hourly basis. So if you can afford to spend, say, $20,000 a year on your flying habit, that should guide your purchase plans.

How much you fly also impacts the annual cost, of course. It also amortizes the investment somewhat-the more you fly, the more you get out the fixed portion of the investment. Lets look at a scenario involving 150 hours of flying. At $70 per hour dry, youll spend $10,500 per year on hourly charges, plus an additional $60 for fuel. (We estimate a 14 GPH average and $4.25 per gallon.) Call the per hour costs $130 for a total annual cost of $19,500. Add to that another $21,540 per year for the monthly dues ($1795) and another $8000 for the buy-in. Dont forget, its a wasting asset so every year youre in, you lose another $8000. The way iFly sells this is to think of this as the depreciation youd lose on a new airplane anyway or on the other fractional deals.

The fairer comparison might be to a rental Cirrus SR22. While these arent on every flightline, they are available. We see SR22 rental rates between $220 and $260 per hour. But iFly would argue-and theyre right-that-that the clubs booking arrangements make it a better bet than a conventional rental, where minimum times and limitations on weekend booking might apply. Further, you get the pull-out services, online scheduling and backup airplanes that you dont get with rentals. Summed up, the $75 or $100 an hour more you pay to iFly is for pure convenience. Whether its a good value is in the eye of the beholder.

We compared iFlys numbers to two other fractionals-AirShares Elite and PlaneSmart-plus sole ownership of a new aircraft such as the SR22 or Columbia 350. This review revealed that iFlys annual numbers are closer to sole ownership than they are a conventional fractional ownership arrangement. But the fracs generally require a higher buy-in amount and even though they return an equity share of that investment, you still have to consider lost investment opportunity. Further, to be fair, our chart for sole ownership doesnt include five year depreciation; the others do.

If you wanted to fly an AirShares Elite fractional SR22 150 hours a year, the buy-in would be $135,000, plus $1680 a month, plus $140 per flight hour for a total of $33,850 annually. That total does reflect an additional monthly cost in the form of depreciation of the original investment. With the AirShare-type fractional, members are actual owners of a particular airplane, even though they may fly another one in the fleet. When the airplane is sold, the members get their share of the proceeds.

This, of course, means that fractional buyers suffer the whims of the marketplace. If values tank, so does their share value. Under the iFly model, owners dont take the hit, since theyve already sunk the capital into a deal where none of it is coming back.

Fractionals and iFly make the claim that theyre cheaper than sole ownership. Theyre correct on this point. Sole ownership of a new Cirrus or Columbia flown 150 hours a year is a $60,000 or more annual expenditure, depending on how you finance it. A fractional will be a third to half as much, a point we cant argue.

However, theres another way to peel this banana and thats a multiple partnership in a new airplane. Our chart above shows the numbers. In this scenario, four owners get use of a new airplane that will cost them less each than the iFly deal. However, if each owner flies even 75 hours a year, there are bound to be scheduling conflicts, theres no backup, as with iFly, and you drag your own airplane out of the hangar. And who polices the candy wrappers and empty soda cans?

What our review of iFlys concept reveals is that theres still no free lunch in aviation. iFly by no means offers cheap flying and neither do the fractionals. What they do offer is a more efficient use of money and time thrown at an airplane than sole ownership does.

But there are tradeoffs. The sole owner pays a bunch more, gets unlimited scheduling privileges and gets to manage his own airplane. If it breaks the day before an important trip, tough. The fracs guys get to white glove it. (“Bring the airplane around, will you, James?”) And they might have backup available if the airplane is busy or broken. But they may encounter scheduling conflicts and if pride of ownership brings great joy, they will never know it.