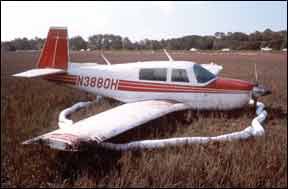 Flying is one of the fastest ways to burn money in this life. Airplanes are expensive and helicopters even more so. For most light airplane owners who fly less than 100 hours each year, owning the airplane actually costs more than operating it.

And in recent years, many airplanes are depreciating much faster than they are being physically worn out. Buying the right amount of insurance to match the

aircrafts value is trickier than it used to be, but is still the only way to protect an expensive investment.

When deciding how much physical damage coverage to buy, there are two considerations, depending upon what happens to the airplane. The first is obvious: If the airplane is crushed beneath the snow-covered roof of your T-hangar, how much money will you need to replace it with a similar airplane?

The corollary to this question is less obvious, but just as important. If your airplane is damaged, what insured hull value will make certain that your insurance policy responds correctly? In other words, you want to come out as whole as possible without overspending for insurance.

In the end, the two questions have a single answer. Youre most likely to get the best result from your policy if you cover the airplane for its current market value, whatever that is.

Wondering just how to figure out what that “correct” market value is for your airplane? The first thing to understand is that theres no magic number as much as there is a range. The exercise of value determination is bound to be somewhat imprecise, since were trying to predict what a willing but unknown buyer would pay for the airplane if it were for sale at some not-exactly-known time in the future. This is a horseshoes-and-hand-grenades kind of thing: You just have to be close.

Airplanes are like houses in that even the ones that start out alike change over time. Some airplanes get more use than others. Some have the stock radios 20 years later, while others are extensively retrofitted with the latest avionics. Given the high percentage of a light airplanes value that can be made up of engine, avionics and paint, two airplanes that left the factory on the same day 15 years ago can have values that differ by 50 percent.

Fortunately, there are a number of industry indexes to help determine what that value range is. The Aircraft Bluebook Price Digest and V-Ref are probably the two most widely used. In addition to providing retail and wholesale prices for a given model, theyll also provide adjustments for engine time, avionics and other optional equipment. These guides also provide information on the costs of overhauling engines and values for aircraft conversions.

If you dont have access to a value guide, your insurance provider will. Guides are an excellent place to start, but if youre still wondering if the number you come up with is in the right zone, talk to a dealer or broker whos familiar with the type of aircraft you own. This will give you a sanity check on the book numbers and may identify an airplane that has a market value higher or lower than what the book shows. (For an article on appraised values, see the August 2011 Aviation Consumer.)

Used aircraft values fluctuate depending on factors ranging from the price of new airplanes or the price of fuel to accident history to change of seasons. As fuel prices have increased, for example, certain types of fuel-efficient singles have become more valuable relative to light twins, which are a bargain to buy, if not to operate.

Publications such as Trade-A-Plane are also a source, but remember that youre looking at prices asked by sellers and youll have no way to know what airplanes actually sold for, or if they sold at all.

do with the way that aircraft insurance contracts are written. Car policies are usually based on the actual cash value of the car at the time of the accident.

If your car is destroyed in an acci-dent, the insurance company looks up the book value of your car, adjusts for mileage, backs out your deductible and writes you a check for less than you think you deserved. And this system works for cars, which are homogeneous when compared to airplanes.

Aircraft policies, on the other hand, are based on an “agreed value.” At the time the contract is written, you and your insurer agree on what the airplane is to be insured for, and that amount is written in the policy. The agreed value basis allows for the wide variation in values between similar aircraft to account for equipment, condition and time.

If the airplane is destroyed during the policy, the insurer will pay you that agreed amount, whether the airplane is really worth that amount or not. And therein lies the rub. If the value of your airplane is not in the zone, bad things can happen.

If you have underinsured the airplane by a great deal, the insurance company may be forced to write you a check for a total loss when it could be reasonably repaired. And can you guess who gets to keep whats left of the airplane? Yup, they do. And theyll sell it to salvage buyers to recoup as much of their loss as possible. Can you guess who decides whether it gets fixed or not? Mostly, the insurance companies do. Its all in your policy, right there in the fine print.

If you have over-insured the airplane by a great deal, things can go just as badly. This can force the insurer to fix the airplane when everybody would prefer to scrap it. Instead of getting a claim check for the market value of the airplane, which would be relatively quick and would allow you to replace it and move on, you have to wait through a lengthy repair.

When you finally get the airplane back, it comes with a stack of Form 337s the size of the Manhattan yellow pages and its worth much less than it was. And aircraft hull insurance policies dont usually pay for a replacement airplane during the repair, nor do they pay for loss of value because of damage history.

Regardless of the policy language, one of the things that separates the good aircraft insurers from the really excellent ones is the willingness of claims officers to go beyond the strict confines of the policy language and take care of the customers problem. But even the most willing and able adjusters need something to work with if theyre going to help you. If youve grossly over-insured or under-insured your airplane, dont blame the system. These guys are playing with shareholders money and there are limits to what they can do.

To avoid selling your airplane to your insurance company at a bargain price or being stuck with an airplane that has been rebuilt from a data plate, pay close attention to the insured value in your policy. Each year at renewal, review with your insurance provider the current Bluebook value and adjustments.

It helps if you know your airplane. Know how much time is on the engine, as well as how old it is. When describing the condition of the interior or paint, be realistic. Its good to know when the airplane was last painted. If you add equipment during the year, dont wait until renewal to adjust the value. Call your insurer right away. As a rule of thumb, take half of what you paid for new avionics the first year and a third afterward and add it to insured value.

The value guides assume a mid-time engine and typically give an hourly amount to credit or debit either side of that. If you overhaul an engine, add half the cost of the overhaul to the value of the airplane. In some cases, you shouldnt wait until all the work is done. If you own a stack of radios that arent yet installed, call your provider to find out how to cover those items in case something happens to them before theyre installed in the airplane.

Some of the large invoices that we pay as aircraft owners are for capital improvements and some are for maintenance. When thinking about what your airplane is worth, separate the two. Dont try to cover the cost of maintenance with insurance. If you have to change all the hoses at overhaul, or a cylinder or two in between, thats ordinary wear and tear and wont increase the value of the airplane. Insurance is meant to cover the cost of owning the airplane, not the cost of operating it. Dont fall in love with the price that you paid for your airplane. It may be worth more or less, but probably less. Airplanes are subject to the gravitational pull of depreciation. The myth that airplanes maintain their value forever is just that. The one guarantee is that an airplanes value will change over time and you need to adjust your policy to match.

When thinking about what you will do if the airplane is destroyed or cannot be economically repaired, consider the costs that you will incur. You may have a substantial deductible. There may be avionics that you feel you need that the next airplane probably will not come with. If you were going to replace your airplane, would you want an airplane with collision avoidance and deicing equipment if you have those now?

For many of us, theres sales tax to pay and the inevitable cost of getting an airplane thats new to you on its feet. We dont suggest that you try to insure these things. But if youre tempted to save a little premium by under-insuring , remember that theres usually a substantial transactional cost to replace it. While valuation is an inexact science, the important thing is that you insure your airplane for an amount thats in the price range that a sane buyer would pay for it. Being off by five or 10 percent wont be the end of the world. But missing by 30 percent could lead to major heartburn during the claims process, if there is one.

Dont forget that the amount that you insure the airplane for not only determines the size of the check if its totaled, but often will decide the entire course of the claim.

If you want the best odds on getting the airplane fixed when it should be fixed and scrapped when it should be scrapped, insure it for what you would expect to sell it for. Insurance is a bet and your best bet is to know how your policy reads and what your airplane is worth.