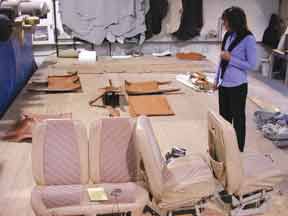 Discretionary spending is one of the first casualties of tougher times, so we expected a drop in responses to our latest survey on interior shops. When you need a new engine, you pony up. But the airplane still flies with threadbare seats and cracked vinyl. You can tough it out.

But this mineshaft canary survey surprised us. In 2008, we got 209 responses—not an overwhelming number, but enough to see some trends and make some solid recommendations. This time we got 132 responses. That’s a 37-percent drop, which is much more significant than we’ve seen on other surveys past to present.

We also noticed a sharp rise in the number of do-it-yourself jobs. In 2008, six percent of the respondents bought kits from Airtex or reported some other DIY interior. This time, 10 percent had bought Airtex interiors, and that number climbs to 16 percent if you lump together those using Airtex kits with several folks who removed parts, brought them to a local auto upholstery shop and then reinstalled them. (Yes, you can do this. See the sidebar on page 13 for some more insights.)

The good news is that most owners had a positive experience. Shops generally hit their cost estimates close or right on (77 percent) and finished on time (60 percent). A full 63 percent of owners would recommend the shop they used to a friend.

On the other end of the spectrum, seven percent of the jobs went 20 percent over budget or more, 12 percent were three weeks later or worse and eight percent would “no way” recommend the shop.

How Much Will It Cost?
More good news is that prices haven’t moved—or have even dropped—over the past four years.

Prices for interior jobs can’t be easily averaged out because some folks are just recovering a pair of seats while others are stripping the interior bare, installing sound deadening and building it back up with fine leather and custom-dyed trim. The majority of owners were doing some combination of a full redo on all seats and carpet, plus interior trim as needed. The average price for a single was $11,490, but a few high-end jobs skew that number. The median paid—the number that approximates the most common response—was $8500, which is $500 less than our 2008 data.

Digging deeper, the data fell into some general groups. The king of the budget jobs was a Cessna 150 owner who had a local upholsterer do his seats, as well as supply the materials for the carpet and headliner. Total not including owner labor: $700.

Two professional jobs at Renew Aviation sounded like good buys to us. A Cessna Cutlass saw “complete removal of the existing interior; seat frames stripped, primed and painted; seat hardware replaced as necessary; seats rebuilt with different density, temperature-sensitive foam with deeper contours; custom headrests built and installed; new sidewalls, kickpanels, door panels and carpet; and the original Cessna Royalite refurbished or replaced as necessary.”  The final bill was the promised $4000. A similar $7500 job on a 210 from Renew was delivered underbudget and early.

There was a fat middle of $10,000-$15,000 jobs on singles where full interiors were combined with sound deadening and some new windows. Sound deadening is a tricky item. It provides terrific benefits on some craft and little gain on others. It always adds weight—more than necessary if not done right. This is one place to talk to several shops and, if possible, owners of like types who’ve had similar work done.

Was it worth it? According to the owner: “Every hour of time you spend sitting in a seat that is sculpted to your personal needs is a payback for your foresight.” Not everything through Airmod was pricey. They did a full interior on a Cessna 182 without fancy customization for a quite reasonable $6000.
Twins usually cost more just by the size of the cabin. Our survey showed an average and a median of $22,500, with machines ranging from a Twin Comanche to a Citation.

Shop Choices
If you’re not doing the work yourself, you have a quite a range of choices when it comes to who does the work. At least two of the Airtex interiors reported in our survey ended up being installed by a local A&P. One was planned to happen that way and one was a decision made after seeing the reality of the Airtex kit.

Some shops will do the work remotely. One Mooney 231 owner shipped her seats and panels off to AeroComfort in Texas. “They completed the job, despite the December rush, ahead of schedule. When I returned to collect my new interior and the signed-off airplane wrapped around it, I was overwhelmed. The workmanship and sheer artistry far exceeded my expectations. So elegant! So comfortable, and somehow so perfectly fitted to my shape that I dispensed with my two-inch, see-over-the-nose seat cushion.”

Many owners reinforced the fact investing extra time up front to clarify exactly what you want before any cloth is cut is time well spent. This 210 owner’s thoughts were typical: “I had met with other shops and received samples, so I knew what I was looking for. Providing pictures or drawings will also help the shop understand what you want and keep the costs down.”

Good advice doesn’t have to be from a big shop, but airplane knowledge helps. This Cherokee Six owner had his work done by Kozura Upholstery. “He is small in volume, and probably does more trucks than airplanes. I know that seems odd, but he knows his stuff, being a pilot himself.”

Be prepared for expenses beyond the interior work when you pull everything out. It’s almost an imperative to have someone check the bare interior for needed repairs when it’s all exposed. This could be the first time it’s seen daylight since being sealed up on the factory line 30 years ago. Corrosion issues are common, as are frayed wires that could pose a fire risk. Some issues are typical for certain types. Broken drift pins on seat tracks and track wear are common on Cessnas. This is where a shop that’s done many examples of your specific make and model can be a real boon.

It’s also tempting to do paint or major avionics work along with the interior. Hey, the aircraft is going to be down for several weeks, why not make the most if it?

This is generally a bad idea, especially if you’re dealing with a smaller shop or multiple shops. If one part of the project gets delayed—additional rewiring for avionics is needed or a part doesn’t arrive—the carefully coordinated schedule is toast. If your interior-free airplane can’t be tugged over to the paint shop on the appointed day, they may push your project to the back of the line. That’s when the deal starts to go south.

That Ain’t Right
Surveys always turn up some horror stories. Said one Bonanza owner of a job: “His installer caused over $5500 in damage to my aircraft, some irreparable and some safety of flight.”

A Debonair owner had a nasty surprise on preflight: “The aircraft was delivered to me with elevator travel blocked from neutral to full nose up. Had I attempted take off, the aircraft would not have rotated. I still get chills thinking about it. In rectifying the elevator problem, the nose gear up/down flag adjustment was disturbed resulting in gear-up flag out of adjustment.”

These issues probably distracted the owner from discovering that the screws for the pilot-side headset jacks were improperly placed and pulling out. To the shop’s credit, the shop owner traveled to the Debonair owner’s home base to fix the problem at no charge.

We received a well-documented case of a Cessna 210 that went in to Evolution Aerostyling in April of 2010 and finally emerged in August of that year—four months past due.

The shop appeared to go dark three weeks before delivery, not responding to email or phone calls. When the owner finally got into the shop, he found it a mess and his airplane in pieces. He considered getting the local authorities involved so he could tow away his dismantled airplane and materials he paid for and cut his losses.

In the end, the job was completed and Evolution paid a $4000 penalty assessed off the $20,000 bill as compensation for the delay. There had been a clause specifying penalties for late delivery in the original contract at the owner’s demand.

We talked with Evolution’s owner Eric Hockman about what happened. He explained that they had just started specializing in 210s and offering their own headliners with LED lighting and custom ventilation. “We were just overwhelmed by what it was taking to put the interiors in,” he said. “It was not a shining moment for the shop.”

Hockman says he’s cut the number of aircraft he does each year and changed procedures so this won’t recur. “I’d much rather do less work and good work and get it done on time. I do a lot of custom work that most shops don’t want to do.”

We don’t think one bad customer experience should condemn any shop. This survey, like previous ones, turned up a couple of negative experiences amidst a field of positive ones for even the best shops, such as Airmod. The takeaway is that problems can happen anywhere, and communication is the key to keeping the shop-owner relationship on the rails. Visiting the shop before you hand over a deposit is highly recommended. A late penalty in the contract isn’t such a bad idea either, though.

Old Seats = Less Use?
Interiors are a funny thing. You don’t think about them that much, even though they may have as big an impact on your flying experience as any other aspect of your aircraft. We wonder if there will be some unwanted consequences of a drop in refurbishment projects.

It seems one of the owners in our survey thinks likewise: “If your back-side aches after three hours in the saddle, you’ll find yourself not wanting to take that cross-country flight, thereby denying yourself and your family of one of the most special aspects of ownership. Get the best interior installed by a top shop, and then use it often.”