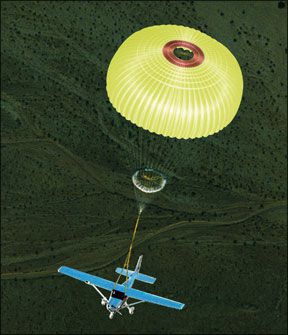 At a Wall Street analysts forum in 2007, the CEO of Ballistic Recovery Systems, Larry Williams, told the audience why he thought the all-plane parachute made sense: “In 2005, there were just over 1600 [accidents] involving general aviation airplanes in this country that resulted in 556 deaths. Now, if you offset that with the fact that were saving 199 people, all of the sudden, parachutes start to make sense.”

Except that its not that simple. As of this writing, BRS has claimed to having saved 233 lives, but thats counting every occupant on every successful parachute deployment as a saved life. A quick look at the record shows that death was far from a certainty in many of the parachute deployments.

A subtler knot in the logic that BRS has saved 233 people is that having a parachute installed affects the delicate balance of risk versus utility in aircraft. We know from experience and interviews that there are pilots who will take on conditions such as rough weather with the chute that they wouldnt take on otherwise. We can only guess that some of the CFIT accidents in the Cirrus were influenced by the faulty assumption that the pilot will always have enough time to pop the bddn chute before auguring in. But the risk equation is more complex than that. Situations such as single-engine at night over mountains or low-visibility takeoffs are risky only because the consequences of an emergency are high, even though the likelihood of failure is extremely low. Having an ace-in-the-hole to cover that unlikely event will shift the go/no-go call for some pilots. We believe those pilots will get more out of their airplane with a negligible increase in real risk. So BRS may be overstating its positive impact on lifesaving, but also understating its positive impact on aircraft utility.

To Die or Not To Die

Lets state this in no uncertain terms: BRS has unquestionably saved human lives. And we think anyone would be hard-pressed to argue any product that can make a lifesaving claim isnt worthwhile. Take the example of a pilot of a Tukan trike whose control-bar downtubes collapsed at 1500 feet, resulting in an immediate spin. Quoting the pilot: “I was in a tight spiral when my downtubes buckled. The wing folded back like a butterfly landing on a window ledge. When I pulled, witnesses said I was no more than 150 feet from the ground.” While its possible to survive spinning in from low altitude, its not likely. BRS can rightly claim a save.

But some chute pops are more ambiguous. A recent save was in a Challenger II LSA. BRS reported that the event occurred, “at 2000 feet altitude when the pilot suddenly lost elevator control. Not willing to risk landing under such conditions, he elected to deploy his onboard BRS parachute system while descending through 1800 feet.” A similar deployment was on a locked elevator on a Dragonfly ultralight that had been towing a glider where the pilot reported, “Since I wasnt in immediate trouble I waited till I was in a better area and fired the BRS.”

While we cant say with authority that these aircraft were landable, loss of elevator control in a normal flight attitude certainly has options. Adjusting power and, if available, trim, can do quite a bit on their own.

We asked Gary Moore, VP of Marketing for BRS, whether claiming 233 lives saved was overstating the case. “I dont know what went through the pilots mind. Could a more experienced pilot have landed? I guess its possible … but the pilot elected to deploy the system. So were not consciously overstating it.”

Second-guessing the pilot is, of course, the tough part of this analysis. We couldnt get to all the records of BRS deployments, but we were able to examine several. There are many that we see as discretionary deployments. That is, the chute was deemed by the pilot to be the best option rather than being the only option. But that includes situations where perhaps the pilot might not agree. In his written report the pilot of that Challenger II LSA felt, “If the parachute wasnt on there, I absolutely would not be here. There was no way to ultimately get the aircraft down. I just didnt have the flight controls to do it.”

Similar thoughts probably motivated the pilot of the very first Cirrus parachute deployment. But even he had control to “[fly] the airplane toward an unpopulated area, shutdown the engine, and deployed the aircrafts ballistic parachute system.” Again, death seems far from a certainty.

There are a couple of interesting instances where the deployment itself was not enough to save the day, but it factored into the save. In these cases, the pilot deployed the chute and then flew under power to guide the aircraft descending under the canopy to a safer landing site. None of these sites were airports, so its anyones guess how a landing would have gone with serious forward momentum.

And then there is that unknown of where the parachute option might have factored into the accident cause. Would a Cirrus pilot who deployed his chute off the coast of Nantucket after getting disoriented on the approach have lied to the controller about being instrument rated if he didnt have the chute as a back door?

Considering he was just trying to get into a fogged-in airport with good VFR options only 30 miles away, we have to wonder.

We asked Moore if he had heard from pilots that the chute gave them the confidence to fly in conditions or situations where they would not otherwise. He said, “Weve heard that anecdotally too, but no one has come out and said it to us.”

Finally, its not at all clear from the numbers that having the parachute makes for a safer aircraft. For example, while 2007 figures show the Cirrus SR20/22 line having about the same accident rate as a Cessna 182 (4.3 per 1000 aircraft versus 4.1 per 1000), the Cirrus line had twice the fatality rate (1.4 versus 0.7 per 1000). But looking at certified aircraft may not be the best judge here. Mechanical or structural failures that make up a large percentage of BRS deployments are more common in homebuilt aircraft than in certified mounts. Loss of control is also more common in light aircraft such as LSAs and ultralights. So having a chute may be more of a gain here. We just dont have the numbers to say one way or the other.

What a Chute Costs

There arent many parachute options in the certified field right now. Its standard on all Cirrus aircraft and can be installed on Cessna 172s and 182s. The Cessna installation hasnt been that popular, with around 75 units in the field. This isnt that surprising because the hit to the payload is large: 79 pounds for the 172 and 85 pounds for the 182. It also takes up about half the baggage compartment in each case. The cost for the system, not including installation, is $18,918 for the 172 and $20,055 for the 182.

While those numbers are hard to swallow in the aftermarket, theyre almost lost in a design installation such as the Cirrus. It will be interesting to see what happens with optional installations such as the Diamonds D-Jet and Cessnas Skycatcher LSA. The Skycatcher install will weigh about 35 pounds.

Since the parachute is an aftermarket addition, Cessna doesnt have numbers for how many Skycatchers will have the system installed. Dealers we spoke to didnt have figures either for how many buyers planned to have the system added upon delivery. The popularity of optional parachutes varies quite a bit. Just as an example, only about five percent of U.S.-registered Tecnam LSAs are ordered with the chute, while about 70 percent of Remos aircraft are. Itll be interesting to see how this trend stabilizes over time.

Cessnas experience with the chute on the prototype LSA holds a lesson for those looking to add a chute to their homebuilt or LSA. The failure of the chute on the first Skycatcher to enter an unrecoverable spin turned out to be due to the angle of deployment in the spin. The rocket fired, but the spinning aircraft sheared off the lanyard that opens the chute. A redesign has fixed the issue (which Cessna got the opportunity to test on the second unrecoverable spin in the prototype).

BRS has installation designs for 14 LSA models and more are in the works. Moore says that if an owner wanted to add a parachute to an existing LSA and the company doesnt have a design it will create one, but theres no guarantee how soon. The more requests there are for a specific model, the further up the queue that design moves.

For homebuilts, BRS offers systems that can mount either internally or externally, and cover aircraft weight ranges from 600 to 1800 pounds and at prices of $2859 to $9313. BRS wont offer much engineering help directly, but they will offer some and will review photos of any installation to suggest changes, or agree that it seems to conform to the design specs. No homebuilt installation is guaranteed, but BRSs failure rate in the field is extremely low, and all have been attributed to installation or pilot error, rather than the equipment itself. To be fair, failures due to deploying at a speed greater than the design limits of the system are considered pilot error by the company, regardless of whether the pilot might have been able to slow the aircraft or not.

The Future of BRS

Like any aviation supplier, the economy has hit BRS hard. Their orders from Cirrus and other manufacturers are down. Theyve diversified and will continue to do so. Theyre making deceleration parachutes for B-52s and bidding on contracts to make systems for UAVs.

Long-term, however, we think the concept of aircraft parachutes has gained traction the way airbags did initially in automobiles. Like airbags, they have become a factor in sales and both the perception of safety, as well as actual safety. And, like airbags, they dont come without drawbacks and cost (as anyone whos been injured by an airbag can tell you) but the record is slowly showing that the gains probably outweigh the costs.

While its easier to evaluate the parachute in black-and-while terms of life or death, the reality is that parachutes of any kind fall into the grey miasma of risk management. Its not a no-brainer that every flying machine must have a parachute, or that every time a canopy opens it marks human life saved. But where space, weight and cost allow, its clear they have the potential to be life savers-or at least offer an easier way to get safely down and live to fly again.