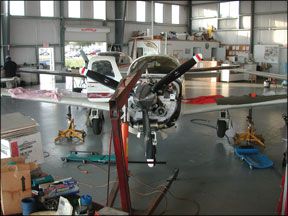 Surrendering your airplane to the shop for maintenance work requires a certain stoicism. You have to steel yourself to expect the worst and enjoy the relief when the news isnt so bad after all. Then theres the invoice, which is always higher than you figured. Sometimes a lot higher.

Why is that? Cant a shop provide an accurate estimate and stick to it? Why must opening the invoice envelope be an agita-inducing moment? Theres no easy answer to this, other than to say thats the nature of airplane ownership-get used to it.

But theres a limit to how much over the estimate an invoice can or should go before something has to give-either the shop gives you a break or, better, you knew the invoice was spiraling upward before the envelope ever arrived.

Happens All the Time

We frequently hear from owners asking what things should cost. “I had a cylinder replaced,” wrote one owner, “and they billed me $600 for labor, plus the cost of the jug. It came to $2000. Isnt that too high?” he asked. Without having the average time a mechanic takes to change a cylinder-a number we dont expect to come by-we cant compare shop A against shop B or calculate any kind of average. Doing the math, at a $75 an hour shop rate thats typical in the shops we visit, it works out to eight hours of labor to swap a cylinder. That seems realistic to us.

Most owners report being surprised not by routine, known maintenance items like cylinder swaps, starter repairs or oil changes, but by novel items neither they nor the shop had encountered before. Oddball operations like rewiring a difficult-to-reach circuit or unusual sheet metal work can eat up the hours. We recently had a labor invoice triple and we rightly squawked, as most owners would. But should they? Is there an agreed upon standard escalation threshold in the industry where the shop is obligated to call the owner and report the bad news? Our answer to that includes the phrase, “dont make us laugh.” Nonetheless, we circulated the question among various shops we know.

If theres any universally appreciated quality that good shops have its that they notify customers when a shift in expectations has occurred. The labor will cost more, the parts will, the job will take longer or what the shop thought was the problem really wasnt. If the owners in the loop, theres a far lower likelihood of an explosion when the invoice is handed over for payment.

“At what point would I call?” says Dennis Wolter, of Air Mod, a highly respected interior shop in Ohio. “If the job is going to run more than 10 percent over the estimate, you have an obligation to tell the customer,” Wolter says. “Its really more about communication than it is the dollars. You have to tell the customer what you found.”

Why more shops dont adhere to this standard is frustrating, but its no mystery. Some people who fix airplanes are mediocre businessmen, but they may be even worse at customer service. The notion that swinging wrenches and schmoozing with customers on the phone belong in the same skill set is absurd. Further, some shops dont have the staff to do customer outreach service, even if they would like to. And others mean to do it, but drop the ball with some customers.

The auto industry doesnt have this problem, at least not to the same extent. At the dealer level, the car industry is largely ruled by flat-rate pricing for practically every warranty and repair item imaginable. If you take your broken BMW to the dealer, the service manager will tell you replacing a fuel pump will take 3.5 hours at $105 per, plus $400 for the parts. (It is a BMW, after all.) And never mind that the mechanic-who might be paid both by the hour and the job-beats the rate and does the job in two hours.

The car factories have raised flat-rate pricing to such a high art that its pervasive enough to trickle down to even independent shops, which may charge a lower hourly than the dealer, but will still use the book guidelines to bill the job.

Nothing like that exists in aviation. For warranty support, the major manufacturers do provide service centers with flat-rate estimates for certain warranty service and some repairs, but nothing approaching what the car companies have. “It really doesnt cover much,” says Sportys Pilot Shop impresario Hal Shevers, of the Cessna flat-rate guidance documentation. He operates a Cessna dealership at Batavia Airport in Ohio. Basically, dealers report warranty claim activity, Shevers says, and Cessna pays the bills. The labor allowance is on the spare side of realistic, says Shevers, but only if the shop has done the operation several times or recently.

At least one of the major manufacturers, Diamond Aircraft, is expanding its flat-rate repair and warranty guidance to cover more items. Diamonds Gary Gaudreau, manager of customer service, says the company would like to describe fixing “every part that can break on the airplane” to give shops labor guidance.

But everyone in the industry understands that the skeletal flat-rate guidance that does exist is aimed at new airplane warranty repairs, not out-of-warranty service. “You know, I dont know how good we would be with the older Cessnas,” Shevers told us, conceding that accurate repair estimates on 30-year-old airframes is more art than science.

Jeff Boshart, owner of a highly regarded shop in Batavia, New York, agrees. “Especially with avionics, theres no way for the shop to know whats in the airplane before they open it up. The original estimate will have to change,” he says.

So, ignoring the warranty on a new airplane for a moment, what should you do if youre presented with a much higher repair invoice than you expected? In our view, you should realistically expect some escalation in estimates to allow for the fact that shops cant guarantee what theyll find when they open up an older airframe for repairs or upgrades.

We wouldnt even blink at a 10 to 15 percent higher invoice number than promised. For any work involving STCs, dont accept the STC sellers claims for installation estimates. “I never believe the hours estimates the STC houses give me. Ill admit were picky, but it always takes us longer,” says Air Mods Wolter.

Further, dont try to hold a shop to a definite number on an annual, other than the inspection portion. The purpose of an annual is to determine continuing airworthiness and that will require repairs the shop cant estimate until the inspection panels are removed.

You should, however-and this is important-expect periodic calls from the shop with reports on what work needs to be done and what it will cost. This will help you re-calibrate your expectations and it helps the shop reduce the likelihood of confronting a customer gone ballistic.

“This is really all about getting the customer back,” says Boshart, so he calls the owner frequently to report progress, especially when the invoice is creeping upward.

The problem arises when the shop runs up the till and doesnt inform you about it. If the bill is 30 percent or higher than you expected, you have a right to ask for an explanation. And the shop ought to have one.

Some owners will beat a shop up to get the invoice reduced. Were not too enthusiastic about this, frankly, except in extreme cases where abuse or fraud may be involved. Its tough enough for a shop to make a buck without having customers chewing on every nickel and dime.

“I think you want your vendors to be able to make a profit,” says Shevers, “so if he goes over six hours on a job, he can eat it and be willing to knock that off the invoice.” Thats why reputable shops tend to have higher hourly rates and probably give higher estimates, too. Theyll also be more likely to knock off an hour or two (or more) of labor when they realize a mechanic took too long to get the job out the door, or if they didnt communicate the escalating labor bill.

In the course of the delicate negotiations over an invoice gone bad, Shevers and other owners say its a good idea to tell the shop how much youd like to come back to give them more business. That sets the tone to bargain toward a mutually acceptable conclusion.

A good shop thats blown the estimate will give some back because they want you back. Our advice is to let them do that. Toeing the hardline and insisting on adhering to the original number shows an unrealistic understanding of how airplane maintenance really works. It may also guarantee to tank your relationship with the shop and thats in neither partys interest.