Its New Years eve 2000, the dawn of the great millennium and youve been tooling around the city sky line watching all the swell fireworks.

After you land back at homebase the taxiway lights suddenly flicker and go black, you get momentarily lost and chop up several light stanchions, hurling blue glass into the crisp night air. Damn, you mutter; Im in for an engine teardown.

So you call your insurance agent at home on New Years morning and report the bad news. No problem, he says, hell call you on Monday with claim information. Unfortunately, when Monday rolls around, the news gets worse. Youre not covered.

Turns out the taxiway lights were controlled by an airport computer that choked on the Y2K rollover and your policy has an exclusion to that effect. Were not making this up. The major aircraft insurers are beginning to issue such exclusions and the first one takes effect in less than a year and relates to, of all things, GPS.

A somewhat less publicized rollover is the so-called GPS end-of-week rollover, which will occur at 0000 Zulu on August 22, 1999. In a nutshell, GPS is a date/time-based system and receivers rely on very accurate timing to determine where the satellites are on a particular date.

As far as GPS is concerned, time began on January 6, 1980 and runs forward in epochs lasting 1024 weeks. At the end of one epoch, a new one starts over at week 0. Evidently, the insurance companies are getting worried that enough GPS receivers will go stupid on that date so as to cause their clients to become the aeronautical equivalent of a Six Ball tournament or, worse, strike a biz jet full of lawyers.

So theyre beginning to do what they always do when theres uncertainty: Issue exclusions denying coverage ahead of time. Cigna, AIG and AAU have already begun notifying clients of Y2K and GPS rollover exclusions and we suspect other companies will soon follow. At least one company-Phoenix-says the whole thing is silly and they dont plan exclusions.

The GPS manufacturers weve checked with think rollover worries are overblown, too, especially for recent model GPS units which were designed with EOW in mind. Older units-especially portables-may stumble and require reprogramming or, at the least, some extra time to download a fresh satellite almanac. The Air Force claims that the GPS satellites and system itself is already Y2K compliant.

No one can predict what effect the millennium rollover will have on air traffic systems in general. The popular press has been rife with stories about how the FAA is woefully behind on Y2K compliance and reportedly, Lufthansa vows that it wont fly on December 31, 1999.

Meanwhile, expect to receive from your insurance company a questionnaire regarding your efforts at GPS rollover and Y2K compliance. Some companies appeared to be poised to issue write backs granting limited coverage for GPS and Y2K issues if clients troubleshoot their own compliance. But at this juncture, were not sure if these companies will pursue these exclusions seriously or snap to their senses, as Phoenix has.

In either case, the risk appears to be acceptably nonexistent. But if youre worried, dont venture out until Lufthansa has flown point for a couple of days. 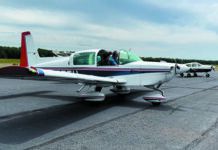