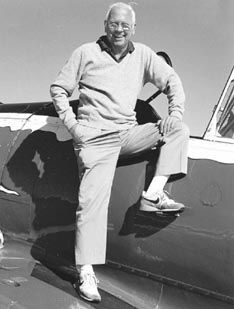 When a new airplane proposal comes along and well before it even flies, the wags in the cheap seats have their say. If theres any consensus, its usually that the thing will never work and will wind up as just more bleached bones in the airport backlot; another failed prototype.

Such was the case in 1960, when the legendary William P. Lear proposed what was then a radical concept: a blisteringly fast two-engine jet designed to haul six passengers, this in the days when the word bizjet wasnt yet in the daily vernacular. Further, Lear planned to not only certify his airplane on a budget but he would finance it with his own money.

Couldnt be done, many said. Wondering if history might be about to repeat itself, we recently asked William P. Lear Jr., the son of the LearJets inventor, for his predictions on the future of Eclipse and other developing personal jets.

While were at it, well tout Lears new book, “Fly Fast…Sin Boldly,” a fascinating account of his own flying and business career, along with a brief history of the LearJet. We dont flog books often but this one is an entertaining and well-written tale of how it used to be.

From reviewing the history of the LearJet, we get the impression that it wasnt exactly received with open arms.

The LearJet first appeared as a proposal in 1960 but it wasnt really the first business jet, was it?

Not really. There was already some competition in the Lockheed Jetstar and the Sabreliner, which North American developed from the F-86 Sabrejet. But the market had nothing like the choices you see now. The Jet Commander ran parallel to our development, but we beat em.

Against that backdrop, your father, William P. Lear, was well known in the aerospace industry for his autopilots and the LearStar conversion of the Lockheed Lodestar, but he was an upstart in new airframe design and manufacture. Was he taken seriously?

I think it took some time; people had to see the airplane and see the performance. The Commander people called the LearJet the boob tube because our fuselage was much smaller and round and they claimed only a boob would buy one. At one NBAA convention, the Aero Commander people handed out long handled shoehorns for those considering buying a Lear. We surprised the hell out of them.

Of course, the LearJet was and remains small by bizjet standards. And so are the Eclipse, the Safire and another small jet, the VisionAire Vantage. Did this small size hurt the LearJet at all and do you think itll limit personal jets?

As I noted in my book, when potential buyers observed that they couldnt stand up in the LearJet cabin, my Dad always used to say, Youre absolutely right…and you cant stand up in your Rolls-Royce, either. If you want to be able to stand up, walk around and fly three times slower, then buy yourself a DC-3. They usually bought a Lear. As for the Eclipse and Vantage, its probably a question of how long the trips are. If the trip is short, how important is a walk-around cabin?

And that brings us to the next question, the single-engine turboprops are turning out to be sharply range limited, if theyre carrying more than two people. Was limited range a market issue for the LearJet? Will it be for the new personal jets?

It never seemed to be. We sold a total of 667 Model 23,24 and 25 aircraft, the early LearJets. We always knew it was a one-stop transcontinental airplane. A good mission was about 2:40 in the early airplanes.

I would guess that the portion of the market to whom range is more important than anything is only about 15 percent. That means a lot of buyers arent worried about range. We had speed to make up for it. If I can go fast enough, you can put me in a 55-gallon drum with the lid on it and I wont care.

We used to fly from Wichita to Los Angeles for lunch and back when fuel was only 15 cents a gallon, that cost $85. Of course, fuel costs have gone up quite a lot since then, but the appeal of speed hasnt changed.

How did the early LearJet stack up in payload?

With full fuel, it appears that the airplane was already over max gross weight by 80 pounds just standing on the ramp with no crew and no pax. I wonder how in hell we ever sold any. To be legal, with a crew of two and four pax, one would have to carry only 4300 pounds of fuel and no baggage. But, thatd give you a range of 1200 miles with no wind.

I can frankly tell you that I never ran a weight and balance on the airplane, so this information surprises me. The general consensus was that if you can get the tanks filled, the fuel caps on tightly, the seats all occupied and 300 pounds of baggage loaded and the cabin door closed, that youre ready to go. It worked that way for all the years I flew them and without any problem. Im afraid that wont work anymore. Folks have suddenly become law abiding, worried about the Feds and their insurance carriers. The end of an era, alas.

When the LearJet rolled out for production, how difficult was it for pilots to transition into it? Was the training good enough?

Not at first, it wasnt. We had a factory training course that took about six to 10 hours, as I recall. We did that all in the airplane, of course. There were no simulators back then.

We really didnt realize what a firecracker we had and the pilots always seemed to be 100 MPH behind the airplane. Remember, a lot of these guys had no jet time. No one had any jet time, really.

They were coming from Twin Beeches. We had some crashes due to upsets at altitude but the interesting thing is that they all hit the ground in one piece so we knew the airplane was strong.

What was the LearJet intro price?

I recall the very early join-the-club price was about $295,000. But everyone knew those were give-away prices. It didnt take long to get to a higher price, by about serial 21 or so, Id say we were up to $595,000. And that was, maybe, profitable.

We were paying $48,500 per engine and you know damned well General Electric was shipping a bundle of money out the door with each engine at that price. But they wanted to get into the market. These days, I dont think you can even get one of those engines overhauled for under $250,000.

Looking at the Eclipse, then, with an introductory price of $837,000, do you see the same escalation happening?

I just dont see how they can make the airplane for that price. But even if it costs $1.2 million, thats $1 million cheaper than anything else and if they do it, they wont be able to make them fast enough.

Jim Rice, at VisionAire, is a friend and I admire what hes doing with that airplane. Im going to have to ask him how hes going to sell a $2 million jet if Eclipse even comes close to their target price.

Adjusted for todays dollars, that $595,000 asking price is about $3.5 million. Still, the Lear had tremendous speed over what went before it. Did you consider the LearJet to be disruptive technology, as Eclipse describes its airplane?

I dont know exactly what disruptive technology means. If it means it disrupts the competition, then I guess thats what we had. I just considered it a hell of a good value when you consider that a 280 MPH LearStar cost something like $300,000.

Compared to the LearJet experience, do the numbers on the Eclipse-speed, payload-look doable to you?

It depends on the engine, of course. The Eclipse has what… two 770-pound thrust fuel efficient engines? Sam Williams [of Williams International] is the only guy who can do this, at the price he says he can. He has an impeccable record of designing and delivering world-class lightweight and fuel efficient jet engines.

As for performance, yes, the Eclipse probably will do it. They may be optimistic on their weight projections, but everybody always is. Im still skeptical about the price and will have to be convinced but the performance figures look realistic to me.

William P. Lear Jr.s Fly Fast…Sin Boldly is published by Addax Publishing Group, Inc. and is available through both Barnes and Noble and Amazon.com.