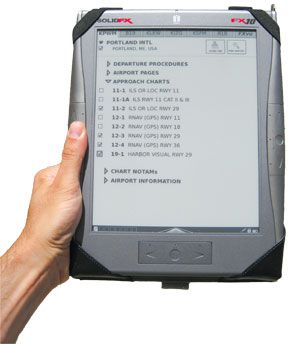 We were pleased that Jeff Van West liked Version One of the FXVIEW software. However, we felt that most of the article was fair, there are some misleading points we would like the opportunity to clarify.

The FX10 is only one ounce heavier and one inch wider than the Kindle DX but it has about 14 percent more display area. Some of our customers tell us they would

prefer an even larger device. While pleased that Van West liked the zoom and pan functionality we were surprised that he did not see a use for it. Being able to zoom in on a briefing strip, missed approach procedure, or small text boxes can significantly reduce the need to rely on reading glasses for those of us (myself included) with aging vision. There are also many Jeppesen charts in a two-page format.

While the unit and FXVIEW software is not inexpensive, the price is set to support a viable business model that can support customers, provide functionality enhancements, and bring new products to market. We cannot apologize for having a business plan that allows us to employ the best, be viable and provide a return on investment. The landscape is littered with bankrupt aviation ventures that promise too much for too little.

I could comment on some of Van Wests other concerns such as the fear of losing the stylus, but I will leave that as material for a follow-up review. We believe that the FX10 represents a major step forward for portable charts. It is the clear choice for pilots who fly internationally or long distances and would otherwise need to manage and carry large/heavy collections of paper charts.

I enjoyed your article in the August 2009 issue on the Kindle DX by Paul Bertorelli. I did, however, want to point out a couple of advantages that were not covered in the article.

The first advantage is the expense. I spend about $400 a year on paper approach charts and that expense will continue for my glass panel. For the Kindle DX, those charts can be obtained for free, which means I will pay for the Kindle in just over a year.

The second advantage, when comparing the Kindle to an EFIS, is that the Kindle is portable. If one rents aircraft, or is part of a club, the Kindle provides charts for all of those aircraft.

The net is that the Kindle can be attractive, maybe more so than the article intimated. I know of several people who have made the purchase, leaving me with the impression that the market for this might be somewhat larger than you might realize.

I would like to compliment Jeff Van West on his fair and balanced article about BRS airframe parachutes. I am one of the 75 or so Cessna owners who chose an aftermarket BRS. It was installed by Todd Peterson while our 182 was undergoing his Katmai conversion. In a recent interval between aircraft ownerships (2004 to 2007), I rented a Cirrus. I had happily flown 1000 hours without an airframe parachute before, but during 200 hours of Cirrus flying, my wife Tina and I became accustomed to having one.

When we purchased our current airplane, Tina decreed that it must have a parachute in case something happened to me. She is just about the most cheerful and easy-going lady on the planet, so when she voices such an opinion, I know its time to listen. For us, it has been worth every penny in enhanced comfort and lowered apprehension. Non-pilot passengers really like knowing its there, too. Were it not for the BRS STC for the 182, we would have bought a Cirrus.

Will I undertake a more challenging flight than I would in a 182 without all of this? Sure, a more capable airplane should enable more challenging missions. I have first generation TAA avionics, a very capable STOL platform and BRS. For example, a prolonged IMC flight in light to moderate turbulence would have exceeded my fatigue limits and now it would not.

I feel more comfortable flying over hostile terrain. I am more capable of making sound strategic weather decisions on the fly with XM WX Weather showing the big picture. However, I am a confirmed chicken about convective weather and icing and those decisions are no different than before.

Its not really about risk, its about the consequences of losing ones bet with the risk. My IO-470 doesnt care about the avionics, STOL kit or BRS and will function no differently on a flight across the Sierras than across midwest farmland. However, the BRS and STOL kit give our family more options to emerge alive or unscathed if the engine or airframe (or pilot) fail at an inopportune moment.