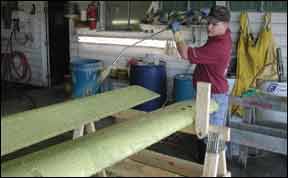 Paint Checklist
I greatly appreciate your informative article about aircraft paint shops. (See September 2011 Aviation Consumer.)  It was informative and contemporary.  Currently, I am doing a complete refurbishing on a 1978 Cherokee Six that I just purchased.  So, I read and reread your article with interest.

I do have one criticism.  Aviation Consumer is my favorite monthly magazine.  I love reading it since you provide the uneducated, like me, with facts, statistics  and hardcore data.  This helps with making a purchase decision.

My only criticism of your article is that it would have been better from my perspective if you would have provided a checklist of what an aircraft  paint project should include.  This information would help me pick the right facility and ensure a complete job. There are so many variables for novices like me; I would like an easy- to-understand checklist. Painting 101 for Dummies.  Is there such an article?

Actually, we published such a thing in the December 2006 issue. As a subscriber, you have access to this on the Aviation Consumer Web site.

Seneca Update
I still have the Seneca you mentioned in the recent Used Aircraft Guide on this model. It’s still running great at 3705 hours with about 75 hours remaining to recommended TBO.  Compressions, oil analysis and consumption have barely changed in five years.

In September 2010, I upgraded the panel with a Garmin GNS530W GPS, Garmin GTX-330 Mode-S transponder. Expenses are up just a bit and my hangar rent at Napa, California (KAPC) is now up to $267 per month.

Also, when the landing/taxi and cowl-mounted lights burn out, I’ve started replacing them with halogen Q4059 lights.  Although more expensive, they’re much brighter (at the same 100-watt rating) and last longer.

Turbine Upgrades
I enjoyed your turbine step-up article in the February 2012 issue.  I think you missed a couple of key points, though.  First, Jet-A is usually somewhat less expensive than 100LL —it’s currently 7 percent less at my home airport— which helps offset the higher fuel burn of the turbine.  Second, in my own step-up experience (and that of other owner-pilots I’ve spoken to), when compared on an apples-to-apples basis, turbines cost about the same to fly per mile as a pressurized piston with the equivalent number of engines.  That’s per mile, not per hour, but it’s what matters most to an owner­—the cost of flying a given trip.

Where transitioning owners get into trouble is that good maintenance and training is required in a turbine (maintenance by the FAA, training by the insurance companies), but is optional in a piston.  So if you’re currently flying a Malibu or 421 with half the panel placarded “inop” wondering whether your BFR has expired, turbines are not for you. But if you’re a conscientious pilot with a commitment to top-notch maintenance and training and can afford the purchase price, a turbine is a no-brainer.

You had a significant error on your reporting on the hourly costs on turbine aircraft in your February 2012. If you simply do that math, for example, on a King Air C90, which burns approximately 80 to 85 gallons per hour (average price of $6.50 dollars per gallon), just the fuel alone would cost $550 dollars per hour.

I have not seen operating costs for a twin turboprop under the $1000 dollar per hour mark and on aircraft such as the Twin Commander, they end up at around $1700 per hour because of the high maintenance costs.

I realize that you sourced planequest.com, however, I would recommend a more reliable source such as Conklin & de Decker.  If you do not have access to this information, please let me know and I would be happy to work with you to obtain the best information for your articles.

On a side note, you might consider an article on those professionals that help buyers purchase aircraft.  After all, most of us don’t do our own taxes, would not even think of purchasing property by ourselves or be our own general contractor. It is why over 10 years ago, I made it a mission of mine to grow general aviation one owner at a time, by representing the buyers.