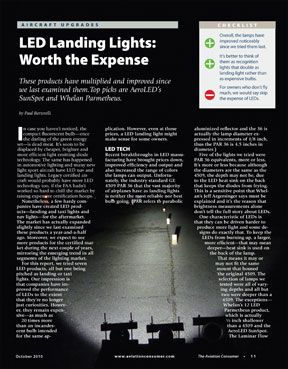 Your recent article titled, “LED Landing Lights: Worth the Expense,” was a disturbing article to me. In it, the author suggests to consumers that they can simply replace their current landing lights with LED lights without any additional

approval. This could not be further from the truth. In order to install any component, light bulb or otherwise, on a U.S. registered certificated aircraft, it must be shown that the part, when installed on the given aircraft, still meets the requirements of FAR 23.

Someone must do the testing to prove that this is the case. If the aircraft manufacturer does the testing, then the LED landing light would be listed as an alternate part in the IPC. In this case, the owner would be able to install the bulb.

The LED manufacturer could also attain an STC, listing the aircraft as an approved installation. Without one of these two items, any installation of a part number other than the one listed in the IPC is unapproved and technically unairworthy.

Your article does a disservice to your readers who trust what you print. Many will now install these bulbs with no approval. Some will face FAA ramp check ptroblems, others will face issues with their IAs at annual. Some may even go unnoticed. Nevertheless, this article has served only to move people further away from safe and legal and should be retracted.

Jason A. Archambeault, IA
Via e-mail

Obviously, we disagree on this issue since we can find no clear directive requiring approval for lightbulbs. The GE4509, the industry standard, is neither STCd nor PMAd and has no approvals of any kind. In some aircraft, it doesnt even appear on the equipment list. We think owners should use good judgment on this. If they deem the LED to be a safe and adequate replacement, we view it as an owner-supplied part. If they prefer to toe the imaginary line we think youre drawing, thats their business. As you noted in a subsequent e-mail, even IAs dont agree on this

Im tearing out whats left of my hair. Trying to get info on the Teledyne Alphabeam LED light. No luck, not even from Teledyne or Aircraft Spruce, the only one advertising it.

We just put two Whelen lamps in the first of our fleet of B arons. Works well, but per the STC, cant be installed closer than 24 inches from the flux gate. We have 17 inches in the left wing position.

Since the Teledyne is scheduled to be PMAd, thought this might solve the issue. What info can you share with us? Even Teledyne seems confused.

Teledyne tells us they have now obtained a PMA for the Alphabeam are are ready to market it. For more information or questions, contact Shannon Giddens at 310-577-3882.

I have enjoyed reading your articles on leaded aviation fuel. They have always been well written and it is nice to see someone with your level of influence in the aviation community talking about the issue. I am sure you get lots of e-mail from people suggesting various technical solutions to the problem, but I think the main problem is the level of uncertainty surrounding the issue.

My solution to the problem would be for the EPA and FAA to jointly announce that lead would be banned 15 years from today. To prevent a problem from occurring 15 years from now, I would encourage people to switch over by putting 20 cents per gallon tax on leaded fuel and increasing the tax 20 cents each year. This would create a clear economic incentive for the industry to switch over.

Unfortunately, none of the aviation groups would ever support either of these ideas. They appear to be happy with the current state of uncertainty about the future. Please dont let this issue die.

I have noted the unleaded avgas discussion carried in your recent issues with considerable concern. Swift and GAMI both seem to be convinced that they can develop an acceptable 100-octane unleaded fuel while the experts at the big gasoline companies say it is impossible. I believe from an engineering standpoint, Swift and GAMI are likely to succeed, but from a business standpoint, the large oil companies are correct.

Actually, the 100-Octane Coalition had best be very careful about what they wish for. The overriding issue will be price per gallon. Nothing would destroy general aviation faster than a $2 or $4 increase in the price of avgas. Folks, even $2 more per gallon would add about $16 to the hourly rate for a Cessna 172, For a turbo 210, it would be $30 per hour and operating a turbo twin like a Seneca II would cost nearly $40 more per hour than it does now.

Even for the turbo 210 owner, a $10,000 engine mod with a big intercooler and electronic timing ignition would pay for itself in 300 hours. Thats based on 94 unleaded saving $3 per hour while Swift and GAMI fuel adds $30 per hour. The same math works for the big turbo twins and other 100-octane aircraft. Also note that after the break-even point, the cost of future operations is always much less, resulting in huge savings, say over 1000 hours. Another issue is fuel compatibility. How, for instance, would Swift or GAMI work with natural rubber fuel line used in a 1938 Cub? How about with various fuel tank sealants? An unleaded version of our current fuel insures compatibility while the legal liability for a high aromatic fuel could be huge.

Also, the ingredients in any new fuel must all be environmentally acceptable. Remember only a few years ago, an oxygenating additive to car gas called MTBE was discontinued because of fuel leaks causing cancer.

The final advantage of using our current fuel without the lead is that we would finally be in compliance with all the other groups where everything from car engines to lawn mowers now run on unleaded.

There is one more risk with Swift or GAMI. The proponents of these fuels assume 100 percent replacement for current 100-octane avgas. In the real world, this is uncertain. Many FBOs have rental fleets of Cessna 150s, 172s and 182s and could decide to carry only 94-octane unleaded. Any competitor renting such aircraft using Swift or GAMIs G100UL would be at a huge economic disadvantage. Thus, at many airports where the FBO has only one fuel storage tank, only 94 unleaded fuel would be available.

You are assuming your opinions about the cost of Swift fuel and G100UL are fact, but the economics are still unproven. Our research (see the August 2010 issue) suggests that 94UL is not a slam dunk winner on price. It could cost a little more or a little less than leaded avgas.

The reason is that some refiners already have in place the alkylate technology to produce such a fuel, but the fact that others dont has an unpredictable effect on competition. Fewer refiners mean less competition and possibly higher prices.

Further, you assume that owners of aircraft requiring 100-octane-and they burn about 60 to 70 percent of all the avgas used-will convert to electronic ignition en masse. Lycoming sees this as unlikely, thus a significant portion of the market will simply not play along.

This could drastically reduce demand, further inching up prices. Furthermore, such a downward spiral would have a devastating effect on small airport FBOs. Also, Continental believes electronic ignition systems can substitute for the octane shortfall of 94UL; Lycoming has pointedly said the opposite. At some point, the market will get its choice.