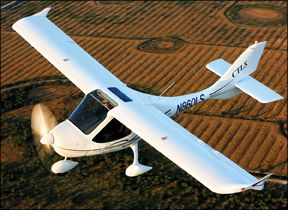 Who Made Them King?

When the specifications for LSAs were first announced, I was disappointed that there was a maximum gross weight limit. This limit is so restrictive that few LSAs have reasonable useful loads. To be functional, I think a two-seat airplane should have enough carrying capacity to put two adult males and enough

fuel for three or four hours flying in them.

More important, for the growth of the pilot population, the weight limit eliminated two of the most popular aircraft that should be in the category, the Cessna 150 and Citabria.

Until I read your article in the May 2010 issue of Aviation Consumer, I didnt know the reason for this limit.

Well, my disappointment turned to anger when I read the quote of Earl Lawrence of the EAA, “We specifically excluded some of the heavier legacy airplanes because we wanted to encourage the development of new airplanes and new products.”

So, who is this “we” and who died and made them king? To take this position and leave huge numbers of potentially inexpensive LSAs out of the lineup is outrageous. Sounds like the group did the bidding of the manufacturers to the detriment of the potential pilot population.

A couple of years ago, some of the alphabet groups announced they were going to attempt to get the FAA to increase this gross weight limit. I believe EAA and AOPA were among the participants in this drive. Since the initial announcement, I havent heard anything more. Do you know anything more about this and its status?

Until we see a truly inexpensive way to learn to fly, there wont be the numbers of new pilots necessary to turn the tide on the dwindling pilot population.

We thought the review of the Avidyne EX600 was a fair and accurate assessment and you clearly conveyed all the features and benefits that make this a great product.

We think a couple of items are worthy of comment. Regarding the issue you mentioned about “repeatedly pounding the left pan button” and it panning slower than expected, the panning works best if you just push and hold. You will get a smooth pan that stops immediately when you let up, as described in the Pilots Guide. As you saw, it doesnt work as well when you repeatedly push the pan button.

The EX600 has integrated cooling fans and doesnt require external cooling. You and I both know that you can never have enough cooling fans, but the comments in your cutline suggest external cooling is required with the EX600 and it is not, nor is heat a particular issue with this box.

We think TCM is making a mistake by not developing a two-stroke liquid-cooled diesel of their own. I dont know of any of my fly buddies who are interested in the current TCM design copy of SMA because its not meeting any of the criteria of what we want-save one, its a diesel.

Those of us with a basic mechanical knowledge agree that we will not be readily accepting of the SMA type engine, especially when there are a couple of alternatives available that do not have a valve train to wear out, nor require a massive unappealing front cowling with all of its air scoops, plus it has hardware hanging underneath that blocks nosegear from retracting. If TCM proceeds with a 350-HP version, it doesnt appear to me that it will work in my Malibu, unless the hardware underneath is relocated.We all did the math and converting to any diesel does save money to pay for all of the extra costs for a retrofit, including the cost of the engine, all within one TBO or TBR, and then after that, it really starts paying for itself many times over. But wouldnt it be better to wait for the DeltaHawk or at least something like it?

I was very glad to see the detailed article in the May issue about getting serious IFR practice with desktop PCs. This valuable resource is not utilized by many IFR pilots. I have X-Plane, FSX and FS 2004. They all have value.

I fly a Cirrus SR-22 with Avidyne EFIS and only FSX gives detailed accurate knob turning, using Avidyne student and Reality XP 430s. The X-plane has no compatible systems with accurate avionics for the SR-22, but does for other aircraft.

My main point (the same as yours), is not to promote one system over another, but to share my enthusiasm over the real and valuable IFR experience one can get on your home computer.

If you think you are proficient, challenge yourself to getting in a desktop C-172 in any brand simulator and set weather to 200 feet, 1 mile and do an ILS (with no autopilot).

My aircraft is equipped with a 121.5 MHz ELT, which are now obsolete. So I have a SPOT satellite messenger and have been using it in my aircraft since September 2008. My family and I are very pleased with it.

Your description of the SPOT fails to describe how versatile the device really is. All of the outgoing messages can be custom configured to relay specific information in a manner of your choosing and these settings are saved online in a profile. Each SPOT device may have more than one profile ready for use, each with custom messages and recipients. These profiles may be selected as active via internet connection before your trip.

My standard message goes to my wifes cell and her office computer, our sons cell, my designated emergency friend and my cellphone. If we are flying to visit a relative, we add their cellphone to the list and send out an OK message a half hour before getting to the airport, so they know when to pick us up.

The 911/SOS message does not map to recipients in the same way. A primary and a secondary emergency contact are designated on the profile along with their contact information.

Here is how we use the SPOT for a local fly: During preflight, once the airplane is out of the hangar, I turn the SPOT on and send an OK message after it stabilizes for about 30 seconds.

I clip my cell to my shirt pocket and continue preparing for the flight. The cell usually pings the text message on taxi to the run-up area. Once the cell pings the message, I reset the SPOT and put it in TRACK mode. I put the SPOT on the dash and try to keep it in the shade of the windscreen center post.

During the flight, my wife will often open the SPOT shared page and follow my progress from her office computer. If I have to divert or have a non-emergency delay, I can send a HELP message, letting everyone know that I have been delayed.

When I land, I reset the SPOT and send another OK message, letting everyone know I am on the ground and the trip was completed safely. If I were to have an emergency in flight, I would simply press the 911/SOS button. It takes less time to do that than to reset my transponder to 7700 (a feature of the new transponder I dont like). If I couldnt do that, the SPOT would still have my track to within 10 minutes of my current position. The 911 feature on the new SPOT2 sends a message every five minutes, but I think it is more often than that on the SPOT1.

I have had the SPOT for nearly two years and I like it a lot. While the SPOT system is not perfect, it does work and has some very handy features. The shared page feature is very informative and entertaining for my family and adds a level of usefulness not possible with an enhanced ELT.