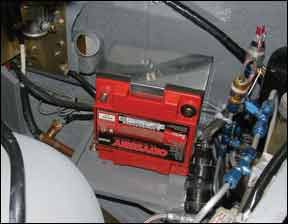 Odyssey Batteries
I read with interest and enjoyed the article on aircraft batteries in the August, 2011 issue.  There was brief mention of the  Odyssey battery, as applied to homebuilders.  I have Odyssey sealed batteries installed in two different aircraft, a Cessna 180 and a Cessna 185.  These are both firewall-mounted, eliminating 10 feet of heavy-gauge wire.  The balance impact is minimal, as this battery, in the box, weighs 14 pounds compared to the Gill that was removed, at 37 pounds.

These batteries are installed in accordance with a field approval, which is increasingly more difficult to obtain. This has been a win-win deal for me, however.

Eliminating the heavy-gauge wire, losing 23 pounds and, for winter operations with the firewall mount, engine warm equals battery warm.  I am getting a solid five years out of these and have been replacing them then just because. Due to the reduced size, they can be, in some cases, recycled to motorcycle duty.  I have never had a problem cranking a hot IO-520 with these great little batteries.

Accident Stats
In your article on “Smart Autopilots” in the August, 2011 issue, you opine that “there are also many low-time pilots relying on technology to make their mission possible.” Without qualification, that might mean these are inexperienced pilots with few hours of total flying time.

The data from Cirrus fatal accidents shows the opposite. Most crashes involve more highly experienced pilots with little transition experience who fail to handle awkward situations, especially with avionics issues.  I wonder if you meant low time-in-type pilots?

Certainly, training for transitions to different cockpit capabilities lack standards similar to PTS for basic flying skills. In which case, it is less about low-time pilots and more about poorly transitioned pilots.  For certain, additional complexity from safety features requires additional understanding, at least until the technology is smart enough to get out of the way, a mantra from working at Xerox PARC years ago!

Garmin vs. Aspen
I was surprised at why you picked the Aspen over the G500 for a retrofit. If you look at how the AI looks when it moves on the Aspen and Garmin, you will see that the Garmin is more fluid in its movement than the Aspen ratcheted look.

Also the display text is far better on the Garmin than the Aspen’s primitive look. As far as install, the Aspen would be the winner. But as far as a more robust system, the Garmin wins, in that it has a complete proven AHRS and ADC as opposed to the Aspen ADHRS.

We don’t agree that the Aspen system is primitive nor is the GPS-assisted ADHRS unproved. It has a different look by design. We agree that Garmin’s display text is more readable. As noted in the article, the installation for the Aspen system requires less major surgery in the aircraft, again, by design. That’s why we picked it.

TIS vs. TAS
I have a TIS system and the fact that the TAS systems do not show predicted track is a big deal. Thanks for mentioning it. I guess the user is stuck.

I plan to upgrade, but the ADS issue is confusing to me…any chance you could graphically outline the ADS issues for those looking to upgrade a transponder, weather, or traffic system? Unrelated, but an idea to consider, have you ever looked at angle-of-attack systems?

You’re not the only one confused by ADS-B options. In the November issue, we’ll be analyzing and putting into context the entire NextGen system. Right now, it’s mostly a herd of semi-related three-letter programs in the FAA R&D mill.

As for angle-of-attack indicators, we covered these in the March 2008 issue. This article is available on our Web site (www.aviationconsumer.com) for subscribers. We plan to revisit the topic this year.

Dual Screen Trainers
In your article on G1000 trainers, you said the Garmin software is single-screen only. The Garmin G1000 desktop simulator for the Cirrus allows both the MFD and PFD to be visible (along with the autopilot panel and keyboard panel).

It might require dual monitors, but many people have those.  I can send you a picture of it running if you like.

You’re correct, the software does support dual monitors—if you have them. Some people do, many don’t. We should have drawn the distinction.