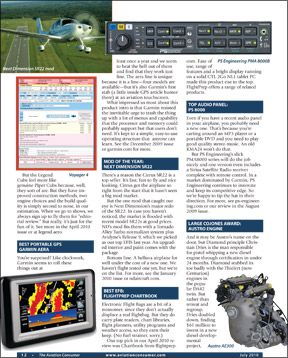 Are You Kidding Me?

Ive been following the EFB debate for years-often considering but never committing to buy a device to take with me on IFR trips, yet reading everything available on the subject.

I was amused by your “Gear of the Year” awards (July 2010 Aviation Consumer) in which you awarded fully three different devices to do the job of plate reading, flight planning and enroute EFB. It seemed as if my own reservations were validated by your conclusions: There just isnt any one device that does the whole job well.

Buy all three? When Id have to carry paper for a secure backup anyway? While the gadgetophile in me says yes, common sense is saying, “are you kidding?”

Why, of course we are perfectly serious that you should buy all three. What are you, some kind of cheapskate who doesnt want to support aviation?

I have had a subscription to Aviation Consumer since the early 1980s. I have enjoyed the magazine and I have found the information provided in the magazine over the years to be both helpful and accurate. However, when I read your recent article on the iPad, I was surprised how poorly the author of the article researched the subject.

I have been using an iPad since early May and, as a result, I had been looking forward to the promised review. Unfortunately, when I read the article, I found it to be inaccurate and poorly researched. As I understood the article, the author liked the design and ease of use of the iPad, and its sharp readable screen. However, he was critical of the iPads size and the difficulty with mounting the iPad in the cockpit.

Unfortunately, had he done his research you would have discovered that RAM has already designed a mounting system for the iPad. Further, a local pilot in Camarillo recently designed a kneepad for the iPad which is available at the Cardinal Air Center in Camarillo. The other major criticism of the iPad was that it could not be used as a moving map. That is simply not correct. Both WingX and ForeFlight have moving maps. Both companies have recently upgraded their systems specifically for the iPad. I have used both systems in flight and found them to be very accurate when I compared them with the data on my Garmin GNS530W.

The only criticism that I found to be correct was that the iPad cannot update weather during flight. However, the product has been on the market for two months and I have little doubt that within the near future, inflight weather will be available for the iPad.

I very much enjoy the magazine, but this time I think you got it wrong.

Paul Bertorelli replies: Just off the phone with Van West talking about the iPad. He had lots of four-letter words for Steves perfect little jewel, so suffice to say neither of us will be mistaken for fan boys.

By the way, we mentioned the RAM mount in the caption on page 10. Were told by them its still not available. As for the map, ForeFlight is still downplaying it for that purpose.

I got a huge laugh out of your comment and examples regarding typing on the iPad in the current Consumer.

I have the exact same problem with my iPhone and often accomplish the duplicates of your examples. Great writing, as usual!

I read your article on belly degreasers with great interest, since I owned a Cessna 310Q for 14 years which has under-the-wing exhaust tubes that are very hard to clean.

You failed to include the “Gojo Original Formula Hand Cleaner” which I found to be the most effective cleaner of them all, far easier to use and more effective than Carbon-X .

You just dip a paper towel into the cleaner and rub off the exhaust stains, oil stains, whatever. It leaves a nice glossy sheen and it does not harm aluminum or paint.

Mike Busch of Savvy Aviator is the one who pointed this product out to me, and I completely agree with him that it is by far the best, most easy-to-use cleaner. A 4.5 pound jar costs about $10 and is available at most automotive parts stores.