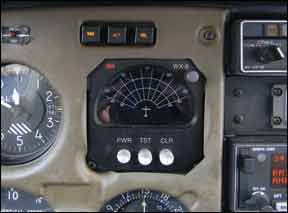 Back in the day if your aircraft sported a Ryan Stormscope, you might lead the way around buildups just like the heavy iron did with ship radar. Today, many owners are yanking old Stormscopes and StrikeFinders from the panel in favor of datalink radar. After all, your trusty portable GPS saddled up with satellite weather tells you everything you need to know about storms.

This argument is highly debatable, and that’s why there’s still a market for traditional lightning detection gear. The good news is that the used market is littered with models of all vintages to choose from. There’s also the high-end Avidyne TWX670 and proven WX500 Stormscope, both of which are compatible with many existing displays. Don’t count on an easy or cheap installation, however. Installing this gear in an already packed airframe is more challenging now than ever.

Sferics 101
On-board lightning detection is considered a real-time avoidance system since it’s listening for and paints actual electrical energy around the aircraft. Most intracloud, cloud-to-cloud and cloud-to-ground lightning strikes should show up on a properly working system. Contrast this to satellite-delivered lightning products that may not show all kinds of lightning strikes (see sidebar) and may come with an inherent delay as well as other displayed limitations. Like is said about datalink radar, sferics systems should be used as gross vectoring aids and not for storm penetration.

Sferics systems aren’t foolproof. New users must learn to interpret the patterns of painted lightning strikes and get a feel for their distance and strength. Newer systems have strike rate counters that detail building or dissipating storms plus pilot-selectable cell and strikes mode that aid in storm interpretation. Better displays and newer processors might help overcome the issues of radial spread and deciphering what’s a bogus strike or one that’s associated with a brewing storm.

It gets trickier as you get closer to the action. A condition called ‘splattering’ is a random pattern of strikes that appear when the aircraft is in close proximity of a cell. Avidyne’s new technology addresses this with a processor that excels in accurately painting activity at close range—a place where most systems fall short.

Sferic systems generally rely on other systems in the aircraft. A lightning detector that knows the aircraft’s heading eliminates the need to clear the screen and repaint the activity every time the pilot turns. Even entry-level AHARS systems can be used as a reliable heading, but sync from a mechanical HSI often requires the addition of a 26-volt AC, 400 Hz inverter.

Real Stormscopes
Lightning detection systems are often generalized as storm scopes. That’s because the industry-standard Stormscope line dates back to the 1970s when Paul Ryan invented the WX7  Stormscope. While we wouldn’t buy one of these old units except maybe to buy a piece of aviation history, there are some Stormscopes worth buying. The WX500 remains in the L-3 Avionics product line and is a worthy choice. It’s a blind system that interfaces with a huge variety of third-party displays. Most MFDs and EFIS displays (including the Sandel EHSI line) are on the list, as is the entire line of Garmin GNS- and GTN-series navigators.

The two-piece WX500 is a remote processor that’s usually mounted in the tail section of the aircraft and is saddled to an antenna that can be mounted on the belly or top of the fuselage. The processor weighs 2.5 pounds and is reasonably compact at 5.6 inches high and 12 inches deep. It has multiple outputs, so it can drive more than one display. There’s a caveat, however; when interfacing with the Garmin GNS 400 and 500 series navigators, lightning data can’t be displayed on the GPS’s map page unless the system is heading stabilized or with a so-called heading “bootstrap.”

For dedicated display rather than an output to an MFD, we like the WX950 Stormscope. It looks ancient with its CRT display, yet it’s a decent performer with both cell and strike mode, rate counter, 200-mile range and the ability to slave with a heading system. The WX950 trickled down from the old WX1000, a three-piece system that included a space-eating remote processor. They’re all over the used market in various flavors. See sidebar for tips on hunting a used unit.

The Insight Avionics SF2000 Strike Finder isn’t technically a stormscope, but it fills the same role. Early units suffered from antenna problems, but it hung in there and became a popular seller. It’s still in the company’s lineup with sensors that utilize broadband digital sampling. Insight says this offers a greater bandwidth that leads to improved signal fidelity and better unwanted noise rejection. The original plasma displays have been discontinued, replaced only by LED assemblies. Systems with later serial numbers and mod status were good performers with an option for a bolt-on heading synchro module. This simplified heading input.

Avidyne TWX670
Avidyne’s two-piece (three with a display) tactical weather avoidance TWX670 system is the most modern sferics device to be had. It’s also the most expensive at $7995. Introduced a couple of years ago, the system is parts of Avidyne’s MHAS or multi-hazard awareness line.

What makes the system different from other sferics is its ability to accurately detect and paint lightning at close range, as well as accurately detect the bearing of the strike. The receiver and system processor also filter the radial spread or splatter that’s inherent in other brands units.

A WX500 can play on four displays, with only one of those displays capable of mode control. The TWX670 can drive up to seven external displays—perfect for the modern, high-tech cockpit—and every display can have control over the system. That’s because each display interfaces via its own bidirectional RS232 serial port. Avidyne also offers a dedicated MHD300 color display.

While the Stormscope products paint lightning symbology as on-screen “X” and “+” symbols, Avidyne does it with hexagonal dots that are color coded if played on a compatible display. Up to 1024 of those dots can appear on the screen at corresponding range and bearing relative to the nose of the aircraft. When we flew behind a TWX670 last summer in a Piper Matrix equipped with Avidyne’s Entegra color screen we found the symbology to be intuitive and accurate especially maneuvering around an increasingly volatile atmosphere that had the system working hard.

The TWX670 is unique in that it can do voice call-outs when strikes are within five miles—“lightning, one o’clock”—much like a traffic system. The installer must tap into the aircraft audio panel’s switched or unswitched audio channel. Whether this extra effort is worth the expense is up to you. To us, seeing the drama of close-by convection unfold on the screen is enough.

This Install Matters
It’s not uncommon for sferics installs to top the $8000 mark. That’s realistic given the complexity of a quality installation. Run, don’t walk, away from low-balled quotes. This is specialized work that will leave you chasing bogus lightning strikes if done wrong.

That’s because sferics weather-mapping systems detect electrical discharge activity. As a result, the installation and placement of the components—particularly the antenna—is critical. An antenna cable passing too close to RF transmitters and servo actuators can cause false strikes that will drive you bonkers. As a rule, the antenna should be at least five feet from strobe lamps and power supplies, three feet from autopilot and trim servos, two feet from transmitting antennas, and five feet from fluorescent lamps and ballasts. The antenna and cabling must be out of the ground-return current path between the battery and alternator as well. Static buildup (and the ultimate static discharge) from plastic lamp covers, fiberglass housings and windows can alter performance. So can aircraft skin currents. Now get all that right within the tight quarters of a small and already packed airframe. That’s what you’re paying for.

In the older days, shops would perform a process called skin-mapping to sniffs out interference and aid the tech in finding a noise-free mounting location. Unfortunately, this careful approach too is often overlooked. But Avidyne confronts this with an integrated spectrum-analyzer-like tool built into the TWX670 to sniff out potential noise in the airframe to show the installer.

Conclusion
If you live in a climate where navigating thunderstorm activity is a regular challenge to your operation, the tactical help of Avidyne’s TWX670 is our top pick. It’s a solid performer with modern features. The L-3 WX500 won’t disappoint either with years of Stormscope experience  (and over 60,000 units produced) built into its processor.

And if you pass on sferics in favor of satellite broadcast lightning data, WSI’s InFlight offers a definite edge over XM’s delivered product. But you’ll need to buy the Avidyne MLB700 for that, and that expense that equals that of a sferics installation. So, in the end, it’s really up to how valuable on-board lightning detection is for you.