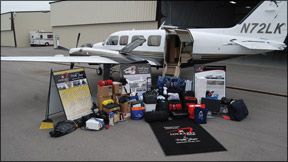 For anyone who needs to haul a lot of stuff and fly fast while doing it, the choices are limited. Unless you have a million-dollar -plus turbine budget, legacy piston twins are the top contenders.

And in that group, Pipers Navajo will survive to the short list and thats why it remains a brisk seller on the used market, despite the cratered economy. Aircraft dealer and modifier Mike

Jones, a Navajo specialist, gets that and thus: the Lock and Key Navajo. This mod treads ground thats been broken before, which is essentially to pick a reliable, robust airframe and remanufacture it to new standards, tossing in some state-of-the-art technology where appropriate. Given that the last Navajo was built in 1984, these airplanes are ideal candidates for the sort of upgrades Jones offers on the model.

Remanufacture may be too strong, but Jones basic idea is to put the airframe into the same shape it was when it was new, but with more modern equipment making it basically a better airplane.

The Navajo represented a departure for Piper, a clean-sheet twin aimed at a market segment that Cessna essentially

owned. The model first appeared in 1967 but really hit its stride when the PA-31-350 Chieftain was introduced in 1973. The fuselage was stretched two feet and the airplane got a nice cargo door behind the airstair door.

The airplane hit the sweet spot of payload and cruise speed, some able to carry a whopping 1000 pounds (or more) with full fuel, making them the rare corporate or big-family piston twin that can not only walk the walk, but can do it for great distances.

In the Lock and Key mod, Jones builds on this pedigree by essentially reworking the airplane from the bare metal stage out. At a standard price of $795,000, not including the airplane itself, this is not a cheap mod. Because of their unique capabilities, the Chieftains have retained their value and a good one still sells for $300,000. There seem to be plenty on

The Lock and Key mod-which Jones launched seven years ago-takes about four to five months to complete and is essentially an extensive renovation. The goal is to have everything down to the smallest light bulb working like factory new. (Jones had in mind the “turnkey” concept, but thought that would be mistaken for “turkey,” thus he went with Lock and Key.)

Various packages are available. The standard avionics setup, for example, is the Garmin GNS530/430 combination, a GMA340 audio panel and an Avidyne MFD. The Garmin G600 is also an available option.

The old interior and paint are stripped and premium replacements are installed. The demo we flew had a tasteful gray leather interior and state-the-art metal panel.

Original Chieftains had the Lycoming TIO-540-J2BD engines with the ill-starred Bendix dual mag. The Lock and Key changes that to the J2B variant, which has conventional separate mags. (See the June 2010 issue for a report on the demise of the Bendix D-mag.) The engines get four-blade

props with Q-tips and winglets, which Jones says helps with the climb rate.

Jones says the business is geared to buy a candidate Navajo and proceed with the mod from there, but it will also accept a customers aircraft thats in good shape.

Jones is big on customer satisfaction so before delivery, he has the airplane flown for 15 to 30 hours to iron out any squawks. Warranties on individual components are extensive, including a year on avionics and instruments, two years on factory engines, four years on a new Janitrol heater and seven years on fuel tanks.