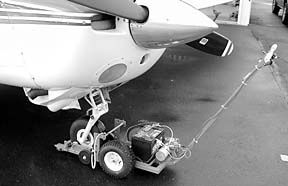 In the September issue of Aviation Consumer, we reported on various hangar tugs pitched to the small airplane market. One we mentioned but werent able to test was the Nose-Dragger Dragger from Skyline Aviation of Swartz Creek, Michigan.

Last fall we obtained a Nose-Dragger Dragger and have been using it to tug the company Mooney in and out of the hangar in all sorts of weather. (No snow yet, however.) Herewith is a brief follow-up report.

Like the Taildragger-Dragger, the nosewheel model is powered by a 12-volt electric wheelchair motor driving a pair of wheels through a bicycle chain-and-sprocket arrangement. The entire assembly is mounted on a frame-like apparatus, with the battery in the center and a momentary rocker switch on the handle. Push the switch one way for forward, the other way for reverse.

The cleverest aspect of this design, in our view, is how it grabs the nosewheel. Theres no towbar or specialized yoke but a pair of steel rollers, one in front of the wheel and one at the rear.

One of the rollers is mounted on a pivoting arm that swings aside so you can drive the thing right up to the wheel, swing the arm shut and proceed with towing.

The motor has plenty of torque to move our light Mooney and didnt seem a bit fazed by a heavier Bonanza which, by the way, it was able to tow without even adjusting the roller mechanism. As far as we know, the Nose-Dragger is unique in this aspect. Traction is excellent, even in standing water, although the speed is but a crawl.

We encountered one minor problem: For moving the tow quickly in and out of the hangar, the motor is far too slow, so there are a pair of small wheels mounted on the front of the device.

The idea is to lift the back of the tow and push the thing wheelbarrow style across the ramp. Because the wheels were too small, the Nose-Draggers roller assembly snagged on the pavement, making this a ticklish if not impossible task.

When we reported this to Skyline, the company immediately sent a pair of larger diameter wheels. Problem solved. The Nose-Dragger retails for $755 in the electric model and $785 for a gasoline-powered version. Assembly requires about an hour and youll need a charger to keep the battery topped off.

Because we keep the tow attached to the nosewheel, we added a safety switch so that an inadvertent bump wont cause the tug to move the airplane unintentionally. We also added a small lamp to illuminate the nosewheel for nighttime hookups.

Still on the subject of hangar tows, heres an idea that prompted one of those palm-slap-to-the-forehead-why-didnt-we-think-of-that moments.

Reader Nick Purdy of Picabo, Idaho wrote to report on a brilliant dual-purpose hangar tug solution. He bought a gas-powered snowblower on sale for $395 then welded up a yoke assembly that connects the towbar of his Cessna 210 to the front shroud of the blower.

The blower has geared forward speed and reverse speeds but a disk -and-wheel transmission that will slip a bit if loaded to heavily. (If you want to copy this design, we hardly think youll need blueprints; take these photos to your neighborhood welding shop and have at it.)

The bracket is mounted to stay but the bar removes with a pin so I can blow snow during the winter. The whole thing cost less than $500 and serves both purposes very well, writes Purdy.

Its a little late in the season for a good snowblower deal but in another month, the garden stores will be unloading them at reduced prices. You know what to do.

Following our report in the April, 1999 issue on turbonormalizers for the Mooney M20 series, a reader phoned to ask if, a year later, we think this is still a good system.

We do, with one caveat: For readers in the northern tier states, Canada and Alaska, owning one during the winter may be a chilly proposition.

As we reported, because the stock exhaust system heat muff is removed to provide room for the turbocharger and its plumbing, the Mooneys normally impressive heater is rendered ineffective.

In response to this, M20 Turbos developer Bill Sandman has re-designed the heater, increasing its collection surface area by about 400 percent and adding insulation to system to reduce heat loss and improve heat transfer to the cabin.

The improved heater is a $250 option for the conversion, whose base price is $23,389 for the kit, plus installation labor.

Reader Ron Saeger of North Dakota bought one of the original M-20 turbo-conversions and although hes pleased with the speed, hes not happy with the heater. (He hasnt installed Sandmans modified heater system.)

Saeger told us he did strip and re-insulate his Mooneys cabin but now has a quieter but still uncomfortably cold cockpit.

Sandman says the only solution may be a supplemental electric heater. These draw between 25 and 35 amps and have a small fan to circulate heated air. One STCd header is made by DC Thermal of Webster, Texas. Actually, these devices would be suitable for any aircraft that have a marginal heater in extremely cold conditions.

DC Thermal makes a number of models in both 12- and 24-volt, ranging in amperage and heat output. Each is equipped with a three-position switch so heat and current draw can be easily controlled. (The heater is wired directly to the battery, so the charging system has to be capable of supplying both the battery and the heaters needs.)

M-20 Turbos Sandman concedes that without the electric heater, this conversion may not be suitable for northern climes during the winter.

Reed called Jeppesen in early January and found the sales person on the phone was unfamiliar with the product, leaving him to wonder if our article was a mirage. Not to worry. (Easy for us to say.)

Jeppesens Scott Reagan told us the datawriter is on track for a mid-February release date, pending some correction of beta test shortcomings. Phone sales agents havent yet been fully briefed on the product.

While were hurling brickbats, one for us. Our headline called this a SkyWriter. Its actually Skybound Datawriter. To avoid confusion, ask for it by that name.