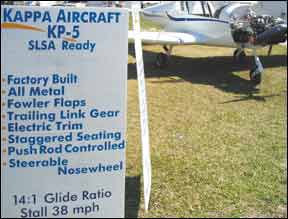 The light sport aircraft market was hyped up with so much promise, but still struggles to deliver real payoff. It’s not that the aircraft aren’t selling—they are, as much as anything is selling. But market has been primarily one of cash, not credit. While credit is tight in all economic sectors today, LSAs have some specific issues that make them a tougher sell to the bean counters at the bank.

Credit is Available
The credit picture hasn’t changed much since we last looked at this issue about a year and half ago. Financing is available for LSAs and experimentals right up through jets so long as the borrower has the right stats. Those are generally credit scores north of 700 and debt-to-income (DTI) ratios in the low 40s, including the aircraft loan. Lenders tell us that if there’s been any movement on what a bank wants to see, it’s that the weight of a good DTI has more play than it did two years ago and the credit score is a bit less important.

What has changed, however, is the number of transactions. Jim Blessing, VP of AirFleet Capital, says they saw an 18 percent increase in transactions in 2010 versus the pits of 2009. The rate of approvals is up about 30 percent. Given that the requirements haven’t changed significantly, the logical conclusion is this represents reluctant borrowers now feeling secure enough to apply for loans. The majority of the uptick seems to be in used aircraft sales.

Rates are generally what we’ve seen for the past two years. Common terms are 20 percent down with 20-year terms at five to six percent. Big loans for big iron can dip below five and loans under $75,000 for used piston singles may be north of six percent. Again, that’s for the right borrower. Fall outside of the standards and it’s unlikely a higher rate will make up for it. The answer will simply be, “No.”

LSAs: Cash Deals
LSA guru Dan Johnson estimates that LSA sales are now between 20 and 25 percent of GA propeller aircraft sales. Yet brokers and banks tell us that LSAs represent about five percent of their aircraft transactions (that’s transactions, not total volume where these low-cost aircraft would be an even smaller share).

Digging deeper, we found this is not evenly distributed across LSA manufacturers. For example, the popular Flight Design series had a good 2010 by LSA standards, with 32 airplanes sold for about $4 million. Financed deals accounted for about 35 percent of those. Flight Design President Tom Peghiny tells us he thinks only about half the deals that required financing were ultimately approved. Pete Krotje of Jabiru told us that he sold eight airplanes this year and one was financed, but historically it’s been about 20 percent.

These LSAs appeal to a wide range of buyers, so it makes sense they’re seeing a wide range of financial situations. For some of the more specialized designs, it’s almost entirely a cash business. Cub Crafters sold 44 of their light Sport Cub S2 designs last year, 42 of which were the 180-HP, performance hot rod Carbon Cub SS model—a $165,000 airplane. Exactly zero were financed.

Randy Lervold of Cub Crafters describes the aircraft market as having three parts: the enthusiastic tire-kickers, the middle section who might buy with financing in secure financial times and the upper third who simply write a check. His market right now is completely that upper third.

Low-production and new designs in LSAs are the other models that see little or no financing. But in this case it’s because the lenders won’t go there. Jim Blessing says of the LSA market, “It took us a while to get our hands around it. Some the aircraft that came back to us lost over 50 percent of their value. They didn’t hold value compared to certified aircraft.”

The ones that plunged the most were due to manufacturers dropping out of the game. Another issue was simply a low demand for used LSAs. High wear and tear on the lightweight interiors and parts, and the breakneck advances in installed avionics compound the problem for selling a used LSA.

So while the credit terms may be similar for LSAs and certified piston singles, the criteria for qualifying aircraft are not. If the LSA isn’t a big enough name to be listed in Bluebook or Vref, then it’s highly unlikely you’ll get financing. Even if it is listed, there’s no guarantee the bank will agree the LSA of your dreams is worth what you want to borrow.

Ron Herold of airplane-appraiser.com points out that low volume makes the valuation highly subjective. “Fair market value requires transactions, and it has to be a fairly current market.” Herold also points out that different appraisers factor in variables differently. He notes that the Rotax engine on many LSAs is only warranted for 18 months from delivery to the manufacturer. If that’s a European company and it takes nine months for the aircraft to be built, shipped and then sold in the U.S., this “new” aircraft only has nine months on its engine warranty and he’ll account for that in his appraisal.

The vast majority of the top LSA names—Flight Design, Remos, Tecnam, Evektor—are built in Europe also run into an exchange-rate issue. Prices were pegged during a stronger Euro that’s since fallen over 20 percent. But the prices have not come down. Potentially there’s fat to trim in those LSA prices, but doing so would devalue the used market in the U.S. and further complicate the picture. So the models remain essentially overpriced compared to U.S.-built designs.

Flight School Sorrows
Phil Soloman, CEO of Tecnam North America, isn’t thrilled with the nine LSAs Tecnam sold this year, none of which were financed. “We would have sold double that number if financing was available. Our target market is flight schools. There is simply no financing for flight schools outside the Cessnas,” said Soloman. Tecnam also sells a fully certified, Rotax-powered twin that is pitched at flight schools, so the financing issue strikes beyond just LSA sales.

Our talks with lenders and LSA manufacturers were uniform in this regard; no one is financing LSAs for commercial use. Krojte of Jabiru says it costs him about four sales a year—which would be a 50-percent increase in sales for that company. “The ones in flight schools on a loan were against some other asset or cash deals. They can’t even finance 50 percent of it.”

Technically, the money can be had from a few banks, but the rates are not favorable. Blessing of AirFleet Capital says a minimum would be 30 percent down and a 10-year term with a high rate. He says that the primary issue is that LSAs depreciate extra quickly on the flight line. The loans are upside down in no time.

Fly Cessna
It’s a completely different picture at Cessna. Skycatchers can be financed through Cessna Finance directly. Terms are generally good, but they wouldn’t commit to exact figures for us. In general, they only ask 15 percent down, but like shorter terms of 10 or 12 years. They also wouldn’t commit to borrower criteria—minimum credit scores, DTI ratios, etc.—saying instead that “We do a full analysis on the individual and make loans based on the individual.

No Future Sans Funds
The LSA industry is stuck in a Catch-22 where low volume of sales hinders financing, but the impediments to financing limit sales volume. For the biggest names this isn’t a crippling issue, but for smaller brands or for the commercial market, it’s devastating.

Soloman of Tecnam put it pretty well: “Financing is a fact with any high capital value asset. Until then, the LSA market will be restricted to rich, older individuals.”