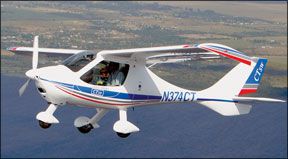 aviation insurers, its the best of times and the worst of times. In many traditional parts of the aircraft insurance market, an overabundance of capital and new insurers is forcing premiums-especially those for corporate airplanes-down to new lows. At the same time, buyers are snapping up new airplanes of all sizes faster than manufacturers can build them. And the two new market areas of the

decade, Very Light Jets and Light Sport Aircraft, are beginning to take off.In some ways, Light Sport Airplanes are an insurers dream. If the glass-half-full guys are even remotely right, there will be shoals of them. And from an underwriters viewpoint, theyre attractive because they have what insurers call “low severity.” Severity is essentially the average cost of an accident.

LSAs are relatively inexpensive and have only two seats, so the cost of even a bad accident is not nearly as high as it would be in a heavy single with a half-million dollar price tag and six seats. The combination of potential large numbers of insurable LSAs and the low severity should make it easier for underwriters to predict the cost of accidents and set rates that will pay for them.

In other ways, LSAs are an insurers worst nightmare. Take the airplanes: Of the roughly 1000 that have joined the U.S. fleet, there are almost 50 makes. Why is that a problem, you ask? For one thing, it makes it harder for insurers to have large enough numbers of any one type to predict how often it will have accidents or how much it will cost to fix.

As one adjuster said to us, “It was easier when we went out and looked at a Cessna, Piper or Beechcraft, with maybe a Tiger or Bellanca thrown in. You knew where to get parts, who was good at fixing them. Now youre not even sure what youre looking at sometimes.”

There are also questions about the durability of LSAs used in pilot training compared to the traditional certified trainers that weve been using for decades. Several underwriters told us that they insured LSAs used by flight schools and felt that while it was too early to say for sure, that newer composite designs seemed less able to handle the daily abuse of flight training than Cherokees, Cessna 150s or Skyhawks.

An even larger problem is support. In order to fix airplanes, insurance companies need parts and experienced mechanics. A large number of small manufacturers just cant build and maintain the support networks that a small number of large manufacturers can.

Nor can mechanics have the same familiarity with 50 different makes of airplanes as they do with the first three or four. Underwriters told us again and again that the availability of a service network was one of their main factors in deciding whether or not to insure different types of LSAs. And many LSAs are constructed of materials that most hometown aircraft mechanics havent worked with extensively and many are powered by engines that, until now, have been almost exclusively used in kit built airplanes. These factors tend to drive up the costs of repairs and limit the number of potential repair estimates that insurers can get.

Underwriters that insure Light Sport Aircraft felt almost unanimously that the challenge presented by Light Sport pilots is far greater than the challenge of the stunning array of new airplanes. As one wag put it, “After all, the airplanes fly well and the engines are reliable, something you cant always say about the pilots.”

Its important to differentiate between Light Sport pilots and pilots flying Light Sport Airplanes. Many of the pilots who are getting into LSAs right now are rated pilots who either have or think they will soon have a condition that will prevent them from passing an FAA medical exam. As soon as their medicals lapse, they become instant Light Sport pilots, as long as theyre qualified in category and class. There are also pilots with medicals whose kids have gone off to school, who dont need six seats any more and who just want something thats inexpensive and fun to fly on a sunny day.

We think there are a lot more of the first category than the second, but its impossible to know for sure. We do know that most LSA sales until now and for the foreseeable future are to licensed pilots, with or without medical certificates.

Were also seeing small numbers of Light Sport pilots who have learned to fly in LSAs and if the true believers are right, there will be many more. How well Light Sport training prepares these pilots to go out and take on wind and gravity may be a larger question than the medical one.

From the underwriters point of view, the decision to insure Light Sport pilots involves taking on a new class made up of experienced pilots of unknown medical provenance and inexperienced pilots of unknown medical provenance. When faced with both the opportunity of large numbers of new customers and the challenge of new airplanes and a new pilot population, insurance companies react with predictable prudence.

In fact, not all of them are quite ready for the brave new world of insuring pilots without the arguable filter of the FAA aviation medical system. One underwriting manager told us with a perfectly straight face that, “Our approach is to be cautiously supportive of Light Sport. We support sport airplanes, at least the SLSAs. Well write them all day long, at least the ones on our approved list. We dont support Light Sport pilots; we still require a medical.”

Light in the Tunnel

Fortunately, this is a minority view and theres a healthy number of aviation insurers willing to take on factory-built Light Sport Airplanes flown by Light Sport pilots, complete with drivers licenses. Some underwriters who cant quite completely let go of the medical thing will have a medical question or two on their applications. Most roughly follow the FAAs guidelines, essentially requiring that the pilot certify that he or she has no known condition which would prevent safe operation of the airplane.

If youre looking to insure an LSA, youll find a number of choices, although not every company will cover every make of airplane. Insurers are looking at many of the same criteria that buyers should be looking at, mainly safety record and dealer support. Insurance companies arent interested in insuring airplanes that cant be easily and economically repaired or for which replacement parts are not readily available. That puts the smaller LSA companies at a disadvantage, but thats life.

When we actually looked at rates, we found that this was true in some cases and not in others. Most insurers, hard as this may be to believe, will charge more if you either dont have a medical or are flying a fairly new type of airplane or both.

The Cub clones dont seem to enjoy a particular price advantage over the newer designs. We suspect this is because they have conventional landing gear. Not surprisingly, the lowest insurance premiums go to legacy airplanes like the venerable Champ, Cub and Luscombe that have been re-registered as Light Sport, mainly because of their lower values.

If youre building or considering the purchase of an experimental LSA, make sure that somebody will insure it for a price youre comfortable paying, as the rates are higher and availability is much lower. At least four companies told us that they insured amateur-built LSAs, but with the plethora of models and engine choices, nobody insures all of them. Like policies for larger amateur-built airplanes, most limit or exclude coverage for the first flight and often for the first few hours.

When it comes to liability coverage, insurers are hedging their bets. Most liability coverage is written with either per-person or per-passenger sub-limits. The typical per-passenger limit is $100,000. So-called smooth limits without reduced coverage for bodily injury might be available by exception, but are not widely obtainable for Light Sport pilots.

Whether this will change as the LSA fleet grows and gains experience is anybodys guess. Frankly, we wouldnt bet on it. If you need a smooth limit, keep your medical. If you cant keep your medical and you have the smash to do it, you might take the advice of one underwriter who counseled us to “Buy a Gulfstream, bring it to us to insure and well see what we can do with your CT…”

If youre considering letting your medical lapse and re-registering your legacy airplane as Light Sport, make sure you let your insurance provider know in advance. Just because youre all right with the FAA doesnt mean youre all right with your insurer. You might be or you might not, depending on the type of policy you have.

The entire world of insuring light sport airplanes is a little more than two years old, and like the LSA market itself, its in constant flux. As of this writing, Light Sport pilots will find a healthy market for insurance for most popular factory-built SLAs and legacy airplanes. Coverage is available for kit-built SLAs, but costs more and is more restrictive.

We wonder if insurers will offer higher limits of liability as the LSA market grows, or whether Light Sport pilots will always be looked at as higher risks because of their lack of medical credentials. What will happen when Cessna and perhaps Cirrus start selling airplanes in large numbers is anybodys guess, but we think it can only help.