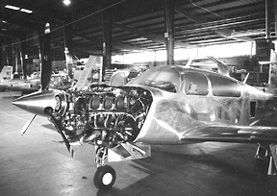 Buyers of orphaned models understandably have concerns about how theyll maintain the aircraft. Will parts be available? Will the factory recover and build new airframes again? What will these worries do to the long-term value of the airplane?

We cant answer all of these questions with confidence but we will analyze Mooneys current situation and offer some advice.

Chapter 11
As we go to press, Mooney has been in Chapter 11 bankruptcy since late July, a development announced during the EAA AirVenture show even as the Mooney sales force at the show was denying rumors of Mooneys demise.

The bankruptcy court instructed Mooney Aircraft Corp. to devise a plan to return the company to profitable health. Mooney proposed finishing and selling 22 aircraft currently in production, a plan the court rejected. In order to satisfy creditors, the court then ordered the current ownership, AVAQ Mooney, to sell the company to a qualified buyer by October 15th.

A number of would-be buyers have come forward. In mid-August, an investment group headed by Kerrville builder John Miers approached the court with a buy out plan and in early October, another group surfaced. Aviation Capital Investors headed by Mooney owner Thomas Seeba announced an interest in at least getting Mooney back into production, if not buying it outright. Neither of these groups has raised capital for a buy out and interest from established manufacturers has been lukewarm. Aviation Capitals web site (www.avcap.com) reports that Fairchild Aircraft, a U.S. subsidiary of German manufacturer Dornier, may have been interested but nothing is on the table.

What Happened?
Why did Mooney get into trouble this time? The details may be left for a future buyer to sort out but sources weve talked to in the industry say that Mooneys market position has never been strong.

The backbone of the product line-various iterations of the M20 line-is labor intensive to build and, of late, prices of new Mooney aircraft have soared. Further, although theres minor product diversity in both price and performance, all of Mooneys airplanes occupy the same segment: Four-place, high-performance retracts. Even some hardcore Mooney enthusiasts cant tell an M20K/252/Encore from a M20J/201/MSE without looking closely.

Mooneys are prized for their speed and efficiency but the reality is that they appeal to a small spectrum within the GA market. While Cessna and Piper produce entry level aircraft which help in developing brand loyalty, Mooney doesnt. Nearly every Mooney owner trained in some other type and, more important, an owner who wants more seats or two engines has to look elsewhere.

Every GA manufacturer, it seems, has gone through some sort of revolving door ownership, including Mooney. Its currently owned by an investment group called AVAQ Mooney operated by businessman Paul Dopp. Before that, it was owned by a group controlled by French investors and before that it was owned by Republic Steel.

Through its various ownership cycles, Mooney has had its ups and downs. Dragged down by cost overruns associated with the development of the ill-fated pressurized M22 Mustang, the original Mooney Aircraft Co. declared bankruptcy in 1968 before eventually being bought by Butler Aviation Inc., the FBO chain. In an aggressive marketing move, Butler purchased the Ercoupe type certificates and Ted Smiths Aerostar lines and brought them to Kerrville where M10 Cadets-Mooneys take on the Ercoupe-were produced for a short time. But the economy soured before the Aerostar could be produced and Butler shut down production of new aircraft in 1971.

Butler didnt declare bankruptcy but negotiated settlements with its creditors, thus the supply of raw materials and deliveries of OEM parts was largely uninterrupted. By the mid-1970s, Mooney again enjoyed success with the arrival of the popular J-model, the 201.

Many in the industry believe Mooney shot itself in the foot in the early 1990s when the company abruptly announced a factory-direct marketing strategy which alienated the life blood of sales: dealers in the field.

By the mid-1990s, the company wooed many of their dealers back into the fold but some were unhappy with the current ownerships management practices. Paul Dopp further alienated aftermarket suppliers in the Mooney market by refusing to let them sell under the Mooney nameplate. (We asked AVAQ principal Paul Dopp for a response to these complaints but our calls werent returned.)

Mooney was further troubled in recent years by the departure of experienced production, engineering and management talent. A source at Mooney told us the tenure of production line personnel dropped from an average of seven years to less than two years.

Then, Now
The overriding question is what does all of this mean for Mooney owners, both recent purchasers and owners of used aircraft? Predicting the future of an airplane company is all but impossible but we wont sugarcoat this: Given the state of the overall economy and the general aviation economy specifically, the prospects for Mooneys quick recovery arent bright. Bringing back an airplane company from bankruptcy in the best of times isnt a cakewalk and following the events of September 11, this is hardly the best of times.

When Mooney went into hibernation previously, new production ceased but parts manufacturing did not. In fact, Ed Penney, a 30-year veteran of customer service at Mooney, told us that many owners never realized the factory shutdown. He recalls that with a crew of two dozen, Mooney produced virtually all parts, including wing sub-assemblies, cowls and control surfaces, even making a profit during the period.

This time, however, Mooneys long-term debt and its delinquency with vendors and raw material suppliers seems to have stopped the production of new parts. Several sources told us that its doubtful if Mooneys skeleton staff will make many if any parts. (Again, our queries to Mooney about this were rebuffed.)

On the bright side, basic Mooney airframe components and sub-assemblies arent needed for annuals and common maintenance. A survey of several large salvage yards shows a limited supply of skins and other parts are available and Mooney service centers have some parts on hand. Owners and shops will have to be creative and patient in locating parts; for the time being, expect to spend time locating parts and dont be surprised to see some price spikes. (For online parts searching, try www.m20parts.com, a recently established service.)

The Mooney fleet totals nearly 8000 aircraft, a base which represents a profitable market for parts, either through PMA authority or some agreement with Mooney short of buying the company. (During the 1971 shutdown, the fleet was less than 5000 aircraft.) Two owner groups-Mooney Aircraft and Pilots Association (www.mooneypilots.com) and Mooney Owners of America (www.mooneyowners.com)-report that established parts vendors specializing in Mooneys are examining PMA possibilities.

Long-term, we think parts support will be there, regardless of what happens in Kerrville. As for resumption of new production, the crystal ball is too cloudy to venture a guess. Although we havent seen evidence that Mooney resale values have diminished, demand for all light GA aircraft has been depressed by the economic downturn.