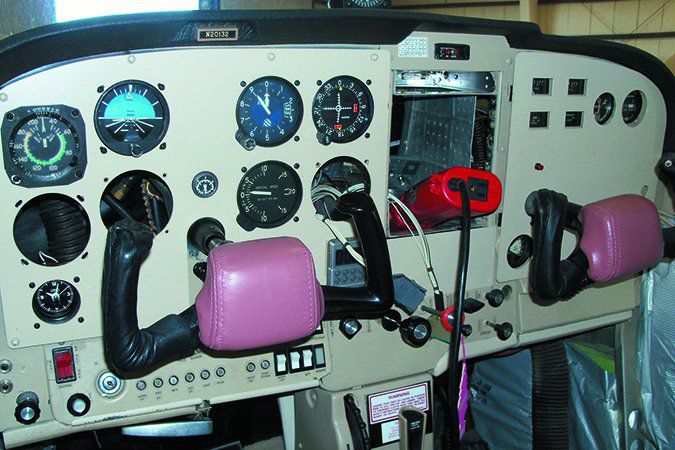 Some major avionics manufacturers, including Aspen Avionics and L-3, are advertising avionics loan options through an outside lending partner that specializes in funding large avionics improvements. Some have created discounted packages, based on loan products.

Need a cool 25 grand to pull the trigger on a retrofit? The claim: simply fill out an online application, get quick approval and the shop automatically gets paid and started on your dream panel. But is it really that easy? How does an avionics loan differ from traditional aircraft financing? And what ever happened to those government-backed private equity loans that were supposed to help fund a big majority of ADS-B upgrades?

To answer those questions, we did some digging. Here’s what we learned.

First, some background. It wasn’t long ago that a full-up mandate-compliant ADS-B upgrade might require an investment nearing $6000 or more. This sent owners into a frenzy wondering how the heck they’ll pay for the force-fed government mandate. For some, it’s time to hang it up.

Fortunately, brisk competition among avionics manufacturers and better technology has kicked that number down as low as $4000, for some basic upgrades. That’s a price point that might be easily covered with a credit card—or in a good year of ownership, available in the maintenance budget. But for aircraft that haven’t seen an avionics upgrade in this century, even a modest retrofit to include a WAAS GPS navigator and all the trimmings will easily top $12,000—perhaps not including ADS-B or a working transponder. Then there are the owners who struggle with spending any money on an ADS-B upgrade. The Feds saw this coming.

Flash back to 2012 and the FAA’s reauthorization bill, which included a provision which authorized (but didn’t require) the Department of Transportation to establish a loan guarantee program to presumably advance the equipage of GA airplanes for the FAA’s maturing NextGen ADS-B program. Government loan guarantees are typically offered by other agencies (the Small Business Administration comes to mind) to help facilitate credit for businesses.

The NextGen GA Fund, which was initially put together by the private equity firm Nexa Capital Partners (also working with the Aircraft Electronics Association), in cooperation with the DOT, was supposed to be a way for owners to get their hands on private sector money for ADS-B projects (plus any other desired avionics improvements), under very simple terms and at low interest rates. It didn’t require a lien or taking out a mortgage on the aircraft, plus it was said that loans could be processed in 24 hours. The avionics shop hands you a loan application and sends off a supporting quote for the work. Easy. So, what happened?

While Nexa Capital’s lending program is still alive (its current lending product is called Jumpstart GA-IN), the original program didn’t exactly turn out the way Nexa Capital and the AEA planned. According to Nexa’s Jim Hughey, it was the DOT that essentially walked away from the idea, which would have created avionics-specific loans (using third-party private capital) with extremely favorable interest rates.

“The way we were going to offer such low interest rates was to work directly with the FAA for a win-win outcome. The aircraft owner gets attractive financing and the FAA gets more equipped aircraft for the NextGen program,” Hughey told us.

That interest rate, according to Hughey, would have been better than any rate that’s available on the commercial market—home equity and personal loans included. The other side of the program is convenience. Since this is an avionics-specific loan program (it doesn’t include lending for maintenance and cosmetic upgrades), you don’t have to explain to a loan officer why putting $25,000 worth of avionics in your $30,000 Skyhawk makes sense.

Where does the government come in? Essentially, Nexa—acting as a buffer—asked the DOT to step in and backstop this private sector capital, which could be had nearly interest free.

“We weren’t asking the government to make and manage tens of thousands of loans, or even put the money up. We simply wanted them to be there so when we borrowed the money for re-lending, the DOT would guarantee our debt—essentially making us a rock-solid credit to our borrowers,” Hughey said. Think of the DOT in the background as a silent partner.

It didn’t turn out that way, and at a sizable hit to the interest rates that now tag along with the loan product. Hughey hinted that the DOT simply wasn’t comfortable with Nexa lending money to anyone they wished, although he made it clear that the company has confidence in the creditworthiness and financial responsibility of aircraft owners in general. These are folks with high credit scores and perhaps atypical of mainstream borrowers.

Moreover, on its web page Nexa says, in part, that while the U.S. Congress approved the use of federal loan guarantees for NextGen upgrades, the FAA “has signaled that it will not comply with the law, and has ignored all lawful provision,” and Nexa urges lawmakers to do more to ensure FAA compliance to free up hundreds of millions of dollars of private sector capital.

With any possibility of a DOT partnership gone with the wind, Nexa Capital has independently moved forward with the Jumpstart loan program, in response to an overwhelming request from buyers looking to borrow money for avionics projects.

Nexa has lined up several established lenders that are making avionics loans at lower commercial rates, with Nexa educating them on the unique and favorable buyer demographic that applies. These commercial lenders can’t come close to the interest rates that would have been possible with DOT backing.

Hughey said the NextGen GA Fund has already loaned nearly $2 million, while the average lending amount is roughly $35,000 for packages in typical piston singles. Loan amounts have been as high as $100,000, with terms ranging from three to five years. No limits have been placed on airframe value versus equipment and labor costs. Instead, these loans (think unsecured) are being written against the individual’s credit worthiness. And you don’t have to finance the entire project. Perhaps you want to pay the labor on your own and finance the equipment.

Interest rates, according to Hughey, have been in the 7 percent range. The chart on page 14 shows some common packages and the monthly payment for a 60-month loan term. At these terms, we think the program will have sizable competition from home equity and other available lines of credit, which could yield lower rates. The average credit score for applicants in this program, according to Nexa, has been in the high 700 range or better.

Nexa says the process is seamless. It can source borrower funding in less than one week and handles the payment directly with the installing shop. Simply provide a breakdown of equipment and labor costs and it does the rest. The way we see it, convenience counts for a lot when your aircraft is already at an avionics shop and you are ready to pull the trigger on a project. Still, we think a more attractive interest rate might be in the 4 percent range. For a better rate in the current program, borrowers do have the option of forking over the aircraft as collateral.

The NextGen GA Fund has partnered with a couple of avionics manufacturers, including Aspen Avionics, Avidyne and L3 Avionics, and put together bundled ADS-B upgrade packages. This could yield a small discount, as participating vendors have reduced the equipment pricing of select ADS-B systems and displays in a given package. Additionally, these bundles may include a portion of the installation labor.

As one example, the Jumpstart Bundle 1 product for VFR panels bundles the Aspen Evolution 1000 VFR PFD with the L3 Lynx NGT2500 ADS-B system, both of the required antennas, plus $2000 of installation labor for 60 monthly payment of $243. In our view, prefab packages simplify your trip to the shop (and price haggling) if you don’t know what you need. Creating yet more competition among manufacturers, some programs may include one year of interest-free payments to sweeten the deal.

But not quick enough. Little did Nexa know that the FAA was planning its own limited-time program to entice private operators to upgrade now, or at least beginning this Fall. Its $500 ADS-B upgrade rebate—that’s estimated to come from nearly $10 million in taxpayer money—has been met with sizable criticism, especially by avionics shops because of logistic snags.

Paula Derks at the Aircraft Electronics Association (the AEA has been contracted to process the rebates) hears the same fits we do as shops struggle with scheduling ADS-B upgrades while waiting for the FAA’s program to commence.

“We’ve heard a lot of disappointment from shops and buyers planning to complete ADS-B upgrades this summer,” Derks noted. That’s because as with any government program involving money, it must publish a plan in the Federal Register—a 60-day public comment period—followed by a 30-day processing/response period. While the rebate program was announced by FAA administrator Huerta on June 6, 2016, it won’t get started until later this September—which is only an estimate, at this point. This means to qualify for the limited-time, first-come $500 rebate (it’s available to the first 20,000 applicants), you technically can’t have the installation performed until the program starts.

We wouldn’t sit on the hands. If you are serious about doing an ADS-B-compliant upgrade, it’s worth securing a tentative slot on a shop’s schedule for September, given the potential rush among other buyers with the same idea. As AEA’s Derks pointed out, use the waiting period to solicit quotes and settle on a package.

Once the program is underway, there are specifics steps you must take to get the $500. Once the installation is scheduled, obtain a rebate reservation code on the FAA website, which first requires owner, aircraft, equipment and installation date information. The installation must be accomplished within 90 days of obtaining the rebate code, followed by a 30-minute validation flight (which must include aggregate maneuvering) in ADS-B airspace within 60 days of completing the installation. Then you obtain an ADS-B compliance report to show that the stuff works per ADS-B mandate specs, followed by obtaining a claim code for the $500 rebate. Once the FAA reviews the claim, it submits the OK to the AEA for check processing. And you thought it was a hassle to get that rebate on that new refrigerator. Yes, you’ll work for your 500 ADS-B bucks.

Signing on the Line

In our view, nothing Nexa Capital is doing with its NextGen GA Fund avionics loans is a new concept. It’s simply a convenient way to get relatively fast cash for the serious money you’ll lay out for even a small upgrade.

Nexa is correct in its claim that it’s bringing an avionics-specific loan program to an industry that’s been asking for one for years. The way we see it, as 2020 quickly approaches, there’s never been a better time for it.