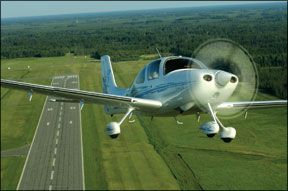 Operating on the premise that good airframes are forever, companies have, from time to time, offered major upgrades and mods that turn the old into the new. Some have been successful, such as RAM Aircrafts twin Cessna engine upgrades or Rocket Engineerings Malibu turbine redo, but many have not. Its not that the upgrades dont perform, but that buyers just dont sense an obvious price/value connection.

This conundrum frames the challenge that a new company called Next Dimension Aircraft will face in introducing whats one of the most ambitious mod projects weve seen to date. We define “ambitious” as a modification whose costs come close to or exceed the value of the airframe.

Thats definitely the case for a new Cirrus project from a startup Next Dimension, which proposes to modify normally aspirated SR22s equipped with IO-550Ns with the Tornado Alley turbonormalizer set-up Cirrus has been selling in new SR22s for three years. The turbonormalized SR22 has been wildly successful for Cirrus until the current downturn hammered sales. Even at that, Cirrus is still selling new aircraft, reporting 68 sales during the third quarter of 2009, a respectable total given the sorry state of the economy.

In addition to the engine upgrade, the Next Dimension mod offers Avidynes second-generation EFIS, the Release 9. Although its comparable to the Garmin G1000 Cirrus offers in the Perspective SR22, the Release 9 hasnt gained huge traction in the OEM market that Garmin simply owns. Depending on how successful Next Dimension is or isnt, Avidyne might see some sales if enough buyers show interest in Next Dimension.

A lot. Next Dimension is no weekend bolt-up project, but a fundamental re-do of the airplane. Beginning with the engine, the existing powerplant can serve as the basis for the Tornado Alley turbonormalizer, it can be overhauled or replaced entirely. Either way, the project involves rework or replacement of the cowling and installation of lots of plumbing for the intercooling and turbo systems.

The existing engines total time and condition will have an impact on the cost of the mod. Tornado Alley has built hundreds of turbo systems for new SR22s, but has done relatively few TN conversions of older SR22s. Nonetheless, says TATs George Braly, the company is happy installing a turbo system on a 1000-hour engine thats in good condition and Next Dimensions Scott Crenshaw told us the decision will be up to the customer.

On the avionics side, the Release 9 represents major surgery for the panel. Some early SR22s have steam gauge/EHSI combos, but most have a version of the original Avidyne Entegra. While thats certainly a capable system, the R9 (and G1000) surpass it in top end features, if not operability. Avidyne has as fully-digital autopilot (comparable to Garmins GFC700) that it hopes to certify by mid 2010. At present, R9 uses the S-Tec 55X.

The Entegra systems relied on a pair of Garmin GNS430s for navigation and communication, but the R9 system has its own VHF suite. So as installed in the SR22, the Garmin mapcoms

are removed from the center pedestal and replaced with the R9s keyboard/controller. The trade-in value of the removed avionics are factored into the price. Also, the R9 will be available in three levels, the platinum (dual AHRS), the silver (single AHRS) and the gold, a non-WAAS version for the overseas market.

Obviously, this isnt a cheap mod. At the upper end, figure around $200,000 all in. But this will be variable with the aircraft selected because Next Dimensions business approach envisions an la carte menu of options. Scott Crenshaw told us the company is aiming for “a new aircraft buying experience for a used aircraft buyer.” To deliver that, ND has in mind buying 2004 and 2005 G2 SR22s on the open market-of which there is a great abundance-performing the mods and then selling them as new for prices between $350,000 and $450,000, against a new price from Cirrus of about $625,000. (In the current market, we suspect new airplanes are going below those prices.)

Price variability depends on the options package the buyer wants. The full boat includes the engine mod, the avionics, an interior refurb and fresh paint. But the buyer can opt in or out of any of these. Some buyers may elect to keep their SR22s and have Tornado Alley do only the turbo mod, which it has the STC to do.

Another option is for an owner who already has an SR22 to have ND do some or all of the mods, at all-in prices that Crenshaw estimates to be between $175,000 and $200,000, but buyers should contact ND for an exact quote for the airplane they have in mind. Crenshaw said some owners have also asked about installing Garmins G600 instead of the R9 and ND is considering that option. Its not clear to us, however, that the G600 would be much of a step up over the Entegra to make it worth the trouble of the modification.

There are several things about this project that give it a leg up, in our view. First, timing. The market is absolutely awash with used, late-model SR22s, some sporting breathtakingly low prices. There are two reasons for this: one is the soft economy in general, the other is the unique buyer Cirrus attracts-owners who have tended to purchase every new model Cirrus has developed, dumping their old airplane into the used market, which hasnt absorbed all the inventory by any means.

Although used aircraft sales seem to be showing signs of life and prices may be stabilizing, its hardly a sellers market. Weve seen G2 SR22s selling in the low $300s and we suspect some are going for a lot less than that. Crenshaw told us NDs mod efforts will focus initially on the G2 aircraft, which appeared during the 2004 model year, but variable with serial number. Thats not to say, Crenshaw told us, that earlier SR22s can be upgraded, but the company hasnt examined that option yet.

In our view, the smoking hot best value might be to buy a 2001 SR22 for $160,000, throw on the turbo mod and a Garmin G600 and have an airplane as good as anything flying for half the money, if models that early can be converted by Next Dimension. And that leads us naturally to wonder what effect this will have on the overall market, Cirrus new aircraft sales and used Cirrus values. Complicating such speculation is that Continental plans to sell its own version of the turbocharged TSIO-550 as a replacement engine for the Tornado Alley systems that come up for overhaul. Moreover, we suspect Continental will pressure Cirrus to drop the TAT turbo as an option and offer only the Continental version. (See the September 2009 issue of Aviation Consumer for more on that.)

Conclusion: We dont think the market is going to recover to anything like 2007 or 2008 levels, so there are going to be a lot of product choices chasing fewer buyers. Thats not good news for Cirrus and it may or may not be good news for sellers trying to unload used SR22s. We dont buy the argument that all these airplanes will suddenly broaden the market into a demographic that wouldnt have otherwise bought an airplane.

If the Next Dimension idea gets rolling, we think a five-year-old SR22 decked out with a new TN system, the R9, tarted up paint and new seats is going to look like a sweet deal against a new airplane costing at least $100,000 more, but probably with a bigger price Delta than that. Next Dimension might just help Cirrus along in doing what it has been good at: being a victim of its own success.