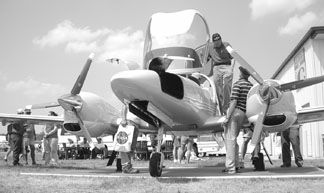 Depending on the vagaries of the general economy, EAAs grand air extravaganza at Oshkosh proves alternately inspiring, boring, encouraging, exasperating or utterly overwhelming. In our view, 2004 was as vibrant an example of the latter that weve seen. Ever. And weve attended a few of these shows, thanks.

We saw more new airplanes, engines, avionics and pilot gimcracks than we could ever report on or even chat about with the purveyors. Usually, four days worth of plastic potties, straw hats and writhing humanity is more than enough but this year, we could have used four more. In the interest of editorial self-preservation, were disgorging our notebook selectively. Well have more detailed reports in the coming months. In short, given the number and quality of new products and ideas, manufacturers appear bullish on GAs prospects.

New Airframes
As predicted, the FAA finally released the light sport aircraft rules and, just as predictably, a sales-starved industry unleashed more new little airplanes than even the most starry eyed optimist could expect the market to absorb. With prices in the $60,000 to $110,000 range, these are modest, low-and-slow models intended for putting around the pattern or for short recreational cross-country flights.

We expect this segment to develop some meaningful volume but, as usual, there are too many players so buyers should be wary of the inevitable shakeout. Well have a more complete survey of the sport aircraft category in a future issue. Meanwhile, for a quick survey of whats available-including prices, specs and powerplants, see www.byDanJohnson.com. EAAs Web site, www.eaa.org, has an excellent summary of how the LSA rule applies to both aircraft and pilots. Beyond the sport category, there were two eyecatchers, Diamonds long-awaited DA42 Twin Star and a new airplane called the Epic LT, an enormous composite single-engine turboprop. Although rumored to exist in Europe, the Diamond Twin Star finally emerged fullblown at OSH and showgoers were crawling all over it. The Twin Star has been under development in Austria for a couple of years but, curiously, has been kept mostly under wraps, leading to a growing whisper campaign that the project isnt performing as expected and is thus in trouble. The fact that Diamond has mounted a pair of Lycomings on one of the test articles as a developmental alternative to the 135-HP Thielert turbodiesels originally planned has added to the speculation that the diesels arent getting it done.

Not so, says Diamonds Michael Feinig, who oversaw the Twin Stars flight from Germany to the U.S. for the OSH show. Although the DA42 does fall short of Diamonds original expectations, we were told its still a 180-knot airplane, burning under 11 gallons per hour total of Jet-A; hardly anemic performance.

The DA42 is equipped with Garmins G1000 primary flight display which has elevated the current sales price to $439,000, well above the $360,000 projected two years ago when the project was announced. The model we examined at OSH-painted in a tasteful silver gray-was equipped with TKS de-icing, an extra-cost option.

One surprise: the Twin Star is bigger and higher than we imagined, sitting on high, retractable gear. It has center sticks and a cabin similar to the single-engine DA40 Star. Gross weight is 3637 pounds for a claimed useful load of 1237 pounds, a bit more than originally envisioned. Diamonds Feinig told us the company is still doing developmental work on a DA42 version powered by a pair of Lycoming IO-360s and expects to make an announcement before the end of the year on which version will appear on the U.S. market first. The diesel version has been certified in Europe.

While the Twin Star will compete with the Cirrus SR22, the turboprop Epic LT will nibble at the top margins of the Piper Meridian/Socata TBM700 market and with a claimed cruise speed of 350 knots and a 1600-mile range, the company says it will also take on the likes of the Eclipse jet. The Epic is huge, with a fat pressurized cabin and neck-high wings sitting astride trailing link landing gear. Power is a Pratt and Whitney PT6-7A and, as does every other new airplane these days, the Epic will have a glass cockpit, this one manufactured by an upstart company called OP Technologies.

The Epic looks slick and fast but theres a twist: the first 17 airframes will be kits, with owners participating in the build process to meet the FAAs 51 percent rule. Certification is supposed to follow the kit initiative. (See www.epicaircraft.com.)

Engine Progress
While Diamonds Thielert-powered DA42 suggests that diesels are finding acceptance-at least in Europe-their future in the U.S. remains clouded in doubt. For example, SMA was displaying a Cessna 182 powered by its SR305 230-HP turbodiesel. Performance-including range and payload-is comparable to the gasoline version but cost of the STC conversion is a breathtaking $77,000 or the equivalent of four overhauls on a Continental O-470. Unless and until avgas vanishes, SMA will have to make a better economic case than that to succeed in the U.S. market.

Superior Air Parts, the leading supplier of aftermarket parts and components, continues to impress with its aggressive initiatives to market an experimental O-360-series engine. This years stunner was a project fresh from the Superior Skunk Works: a gasoline turbonormalized IO-360 driven by a new FADEC from Thielert, the very same company providing Diamonds diesels and who is also in partnership with Superior to market the Centurion diesel for STC conversion projects. Superior told us it has no plans to certify this engine but we suspect that tune may change in a year or two. Whats most intriguing about this system is that its the first throttle-by-wire design weve seen proposed for production. Other systems-TCMs PowerLink FADEC and Lycomings EPiC, retain mechanical linkages.

Speaking of EPiC, Lycoming CEO Mike Wolf said that project remains workable but is shelved pending some interest from airframe manufacturers, something that has thus far been lacking. Meanwhile, Lycoming announced a new engine variant, a 210-HP IO-390 for the experimental market and a new cylinder kit drilled for automotive plugs, also for experimentals, which will be co-marketed with an electronic ignition system provided by Lightspeed Engineering.

Lycoming and Superior also announced that theyll soon be offering roller tappets for many engine models. Roller tappets-not roller rockers, by the way-are used in some automotive applications to reduce friction and improve economy. Lycoming has in mind better durability, however, perhaps eliminating the cam spalling that often plagues its engines.

Although absent from Sun n Fun in April, Bombardier-now BRP for Bombardier Recreational Products-flew in a Murphy Moose experimental fitted with its new six-cylinder V-engine. Is this project going forward? Were not sure, given BRPs low-key-to-the-point-of-invisibility display in the most extreme corner of the show grounds. (See www.brp.com.)

Rotary engines have been proposed for aircraft before and, well, here we go again. Mistral Engines appeared with a 230-HP Swiss-built G-230 Wankel rotary which has been flying in a Piper Arrow since spring of this year. Its under development at Embry-Riddle Aeronautical University. (See www.mistral-engines.com.)

On the light turbine front, a company formerly called Affordable Turbine Power but now morphed into Innodyn announced that its flying what will be the basis for up to a 255-HP inexpensive turboshaft engine. The project took flight on July 19th in an RV-6 and, in our view, shows promise. (See www.innodyn.com.)

Weather Wars
Garmin may own the avionics market but competition in the datalink market has become so fierce that even it was taught a stinging lesson at OSH: you snooze, you lose. In a bold bid to capitalize on pent up demand from Garmin 430/530 owners for a fast weather datalink, WSI introduced the AV200-5 datalink to play on those two popular navigators. Price: $5690 for a certified system, including antenna. But theres…an issue.

Garmin says the WSI receiver is an unauthorized interface, since WSI engineered the interface without Garmins knowledge or approval. WSIs box appears to have a protocol similar to that used by the GDL49 EchoFlight product but neither Garmin nor EchoFlight patented that code, thus public domain use is there for the taking.

Garmin warned dealers and owners that it cant address technical potential issues arising from the WSI/430/530 match-up nor will it guarantee that the WSI box will play with 530s upgraded to WAAS. Presumably, WSI will, however, and we somehow doubt Garmin techies will be punishing WSI buyers with a tech-support freeze out.

OSH 2004 proved not that great for Garmin on another front: it issued recall instructions for the GarminAT CNX80 navigator-renamed GNS480 for new models being brought out with WAAS approaches-to correct a display failure that could blank the display and cause smoke in the cockpit. See www.garmin.com for more or contact a dealer.

Garmin also announced two new aviation portables, the GPS MAP 96 and 96C, both budget models for the low to mid-price market. The 96C has a color display, by the way.

XM Radio and WxWorx continue to show theyre the guys to beat in the world of datalink weather. Although it doesnt have an XM receiver for the 430/530 products, Garmin did announce an XM option for the MX-20 MFD, the GDL69A, a receiver that will presumably compete with the WSI version, the certified AV200.

Not to be left out of the XM tidal wave, Avidyne announced its XMD-076 (price $3750) XM receiver for the popular EX500 MFD. Recall that we reported in the August issue that many owners are unhappy with the Orbcomm-based datalink Aviydne had been offering with the EX500. If those owners order by September 30th, 2004, Avidyne will knock $1575 off the price, making the upgrade $2175 for current owners of EX500 MFDs. (See www.avidyne.com for more.)