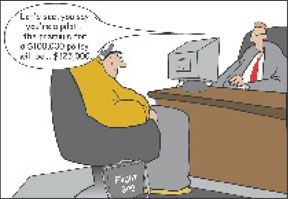 If you fly for

fun or for a living and you have shopped for life insurance, you probably heard the agent draw a breath when he learned you were a pilot. If you fly, you pay more for life insurance. A lot more. My own experience in buying life insurance is typical. After asking my age, weight, whether I smoked and a number of other health-related questions, the agent quoted me the companys most attractive rates, with all the appropriate disclaimers. When we met to complete the application, things changed. The agent asked if I engaged in any hazardous

activities, including motorcycle riding, scuba diving, skydiving or rock climbing. Then, looking around at the pictures of airplanes on the walls and the real airplanes outside the window, he dropped the big one: Do you fly? Yourself I mean?

When I told him that I did, the agent said that the application would have to be submitted to the underwriters and not too much later he sent me a questionnaire to fill out about my flying. When I received the companys offer, it was 30 percent higher than the agent first quoted.

Enter Bill Fanning of Pilot Insurance Center. Fanning worked as a broker selling life insurance and doing estate planning beginning in 1982. From his own experience buying life insurance as a pilot, he believes that insurance companies didnt know enough about flying to tell the difference between a good risk and a bad one.

Fanning looked at accident numbers and decided that life insurers were missing a lot of good safe pilot clients and he set out to prove it to them. Using accident data from the NTSB and other traditional sources, he was able to convince a number of life insurance carriers that he could differentiate between various levels of risk associated with different types of flying, types of aircraft and levels of pilot experience and charge accordingly. PIC is a brokerage rather than an insurance company, but it has agreements with several companies including Allstate, AIG and Prudential that give it rating discretion.

“We try to rate every case based upon risk,” Fanning told us. “Our guys have a conversation with you about your flying if you call us for a quote. We act as your advocate with the insurance company. Our agents are specially trained and know the difference between CFIs who teach primary students all day long and CFIs who do the occasional flight review or instrument proficiency check. They know the difference between a helicopter air ambulance pilot picking up people beside the road in the middle of the night and a fixed-wing air ambulance pilot flying a Learjet from A to B at flight level 410. Our rates reflect it.”

Fanning claims he can usually get you a better rate than youd get anywhere else and can sometimes get you coverage when everybody else declines you. “Youre never going to do any worse with us and we use the very best companies in the business. Theres no downside.”

Although we are naturally skeptical about things that have no downside, Fannings claims made sense to us so we shopped around some. Boiled to its essence, the philosophy of the Pilot Insurance Center is to continue to underwrite where life insurance company underwriters stop and not to penalize pilots for risk that isnt real.

Based upon the data gathered, Fannings company has come up with underwriting guidelines that allow it to look critically at each pilots situation, rather than treating all of them as if they faced the same risks.

Aerial application pilots are an example of how looking at a pilots specific flying profile can make a difference. In general, ag pilots either get declined or pay the standard smoker rate, the highest rate class there is. Fanning looked at ag accidents and found that the odds got much better once a pilot had logged around 3000 hours and for pilots who flew purpose-designed turbine-powered ag airplanes. For pilots who meet these criteria, PIC moves them down a rate class, which saves over $1000 dollars per year in premiums. PIC also distinguishes between flight instructors who are teaching primary students and those who are strictly teaching advanced ratings, or those who occasionally do flight reviews or instrument competency checks.

PIC also gives pilots credit for instrument ratings. Private pilots who fly certified airplanes and who have at least 250 hours and are instrument rated and current will pay the same rates as non-pilots under the PIC exclusive program. Pilots of amateur-built airplanes will usually pay more, as will aerobatic pilots. PIC has dozens of classifications for pilot experience levels, types of flying and aircraft. Fanning told us he had clients that ran the gamut from student pilot to space shuttle pilots and everything in between.

Because of the way the application process works, we were unable to prove everything that Fanning told us. When talking to life insurance agents, we had trouble finding any who had enough experience writing insurance for pilots to tell us what the outcome of the application process would be for different pilot scenarios. In order to find out, we would have needed to file an application and submit it to company underwriters for each quote. We did, however, do the next best thing, which was to visit numerous internet quoting sites.

The chart above shows sample premiums for healthy pilots with different flying profiles insured through the PIC proprietary program compared to rates for several highly rated companies according to rating class. It gives an idea of the difference between highest and lowest categories.

We first asked for a quote for a healthy 45-year-old male non-pilot seeking $500,000 of term insurance with an annual premium fixed for 20 years. We then got the same quotes for pilots. We found that without exception, every company we sampled moved us up one or more rate classes when we indicated that we were involved in “private aviation.”

Of the four companies shown, two moved us up one bracket, one moved us up two brackets and one moved us up three brackets. Only PIC kept us at the lowest rate, assuming that we had 250 hours and an instrument rating. Getting farther into the application process might have changed things, but we suspect not, given the response that we got.

When looking for life insurance, we think it pays to do your homework and shop around. While the internet has made it seem easier to instantly get quotes, we dont think that life insurance is a commodity. We recommend that you find a good broker or agent.

Apart from price, theres a bewildering array of products out there and an agent you trust who is willing to talk to you long enough to find out what you really need will be a help in your search We also recommend that you buy your coverage from an insurer with good financial ratings. And if youre a pilot, youre going to need some help. We think that an agency that specializes in insurance for pilots and Pilot Insurance Center seems like a good bet will save you money, time and find you a top-ranked company in the bargain.