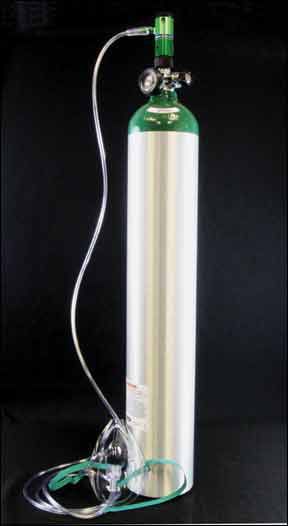 For decades, we’ve more or less complied with the FARs requiring oxygen use above certain altitudes on good faith. But the advent of cheap, easy-to-use medical pulse oximeters has revealed a troubling fact: Even at altitudes below the FAR-required values, many of us are oxygenated poorly enough to benefit from supplemental oxygen. Mild hypoxia—say at 10,000 feet—may very well be debilitating enough to cause judgment errors.

So that argues for both a pulse oximeter and some kind of supplemental oxygen system. Fortunately, since we began covering these products two decades ago, they have become ever more sophisticated and cost effective. There’s wide choice in price, size, accessories and even new products that conserve oxygen, meaning that many owners who use it only at night or occasionally at any altitudes, may need a refill only once a year, if that.If you’re still on the fence about buying an oxygen system—and if you don’t fly above 8000 or 10,000 feet or at night much—we still recommend a pulse oximeter. These have evolved since we last evaluated them in 2005, and the prices have plummeted to under $50.

What you pick in portable oxygen depends on how frequently you use it and at what altitudes you’re likely to fly. The former has to do with tank size and the latter whether you’ll need masks for cannulas or both. Another option is an oxygen generator that, while much more expensive, has the advantage of being always available with no fear of running out when you most need it.

Portable Systems
The basic portable oxygen system consists of an oxygen bottle, a regulator that reduces the pressure of the compressed gas from the 1800 to 2100 PSI range (depending on the bottle) to a usable range, some sort of flow control device and flow meter, tubing and either an oxygen mask, standard cannula or a type of conserving cannula, of which the Oxymizer is most common. A conserving cannula “rebreathes” a portion of the oxygen via a small bladder either in a plastic moustache device or pendant arrangement on the cannula. The conserving cannula uses about a third of the oxygen of a regular cannula or mask.

The FAA requires using a mask instead of a cannula above FL180. Most of the suppliers provide only one mask with each system, something that puzzles us as basic masks aren’t that expensive and would allow you to operate above FL180 on a flight, plus you may have a passenger or two unable to breathe through their noses.
If you’ve ever used a mask, you have some inkling of why people sometimes ignore the 18,000-foot guidance for cannulas. Masks are generally less comfortable and they’re awkward to use. But our tests of masks versus cannulas show that for normal breathing, masks do a better oxygenation job.

Bottles
Oxygen bottles are available in a wide range of sizes, capacities and weights. For the purpose of this article, we looked at systems with the 22-24 cubic-foot models (some suppliers did not have one or the other) because they provide enough oxygen for an extended round trip without refilling and can be wrestled in and out of the airplane without Herculean effort. Although suppliers have similar selections in cylinders, they can obtain other sizes in most cases. These range in size from minimal 6-cubic foot A cylinders to 33-CF tanks that will keep four people perking along for six hours at 18,000 feet. Obviously, buy the size that suits your trip profile.

Regulators reduce the bottle’s high pressure to something that the flow meters and dispensers can handle.  These can be adjustable or fixed. The advantage of adjustable regulators is that the flow can be bumped up when two or more users are on the system, causing uneven oxygen delivery. Regulators are also set up with either two or four user outlets. Some smaller systems may have just one. Again, buy what you need.

Flowmeters for oxygen systems are rotameter-type designs, sometimes called floating-ball meters. They consist of a clear plastic tube with unmetered (but pressure-reduced) flow entering one end and metered flow to the mask emerging from the other. The flow is adjusted via a thumbscrew needle valve that suspends the ball in the plastic column corresponding to a scale calibrated in altitude. There are two common types of flowmeter, the A-3 and the A-4. The A-3 is designed for use with the industry-standard Oximizer conserving cannula, while the A-4 can be used with either a cannula or a mask.

Precise Flight offers the A-5 flowmeter, which is an improved version of the A-4 that’s suitable for masks and cannulas. Aerox has its own flowmeter design called the Glow-Meter. It glows in the dark to make tracking the flow at night easier.

Some suppliers include carrying cases with their portable systems, some price them as extras. While a carrying case allows slinging the oxygen cylinder to a seat back, they do cost about $50 and we note that users put the bottles in a number of locations, so saving a little off the price in return for no carrying case makes some sense. We priced two- and four-place systems. In doing so, we noted that some companies offer a basic two-place system targeted toward the occasional user at some attractively low prices.

Aerox
Aerox is the most expensive of the suppliers we surveyed. Typically, their systems include individual flowmeters so each person can select the appropriate flow via a dedicated meter. They list quite a range of cylinders for their systems, from the smallest A to the largest F. Carrying cases for the Aerox system will fit most of these cylinders, although not all of them. The bottle fits into a sleeve like carrier which then zips up.
The regulators are equipped with push-pull connectors which simplifies plugging users in or remove users. It also allows you to disconnect the hoses to sort through tangles. Aerox also offers a nice little fixed flow system called the EMT-3. The company says it will last about 25 minutes at 25,000 feet and would be an excellent emergency system.

Mountain High
Mountain High has one of the most sophisticated and complete oxygen equipment lines in aviation and sells everything from fittings to oximeters to full systems. Some years ago, it developed a clever electronic pulse-demand oxygen conserver that dramatically reduces oxygen consumption at the expense of a bit of cockpit clutter.
MH sells compete systems, with carrying bags, regulators and dispensers.  In the four-place market, MH’s systems are toward the top tier and we think it has one of the best-designed regulator systems in the business.
The regulator has four ports, which have snap-in connectors that exit the top. In a four-place system, this helps organize the tubing, since they all exit the top of the cylinder in the same direction. Further, you can easily expand it to three- or four-place down the road by just adding tubing, flow meters and cannula.

Air King
Air King, also known as Delta Oxygen Systems, has a basic, two-place portable system—which it calls Advanced—with standard cannula and no individual flow control for a reasonable price of $425. It’s a good basic, starter system in our view. From there, you can step up into the Oxymizer cannula and individual flow control. It also calibrates its flow meters in liters per minute, which allows for a rapid bit of math, knowing the capacity of the oxygen cylinder, to determine the endurance at the present rate of use.
Air King also sells what it calls an oxygen headset, which uses an over-the-head band to support a nasal cannula, rather than the usual around-the-ears arrangement. Air King has both standard cannulas and a simple mask without a mic.

AeroMedix
AeroMedix also offers a basic, two-place portable system at a rock-bottom price, $365.95, which includes Oxymizer cannula. It makes use of a simple splitter to provide oxygen to two people, but, as with Air King, there is no individual flow control. Adding two of its proprietary, acrylic flow control flow meters bumps the price to $495.
We like the AeroMedix flowmeters; they’re as robust as we’ve seen and not likely to get broken if someone inadvertently kicks one.

Precise Flight
Precise Flight bought out Nelson Oxygen, one of the innovators in the world of portable aviation oxygen. It takes the approach that individual flow control is needed even at the most basic level and also seems to be the only company that provides the same number of masks as it does cannula with each system. Its A-5 flowmeter is a variable area flowmeter, which is a tapered tube, vertically positioned with the large end at the top, and allows visual monitoring of the volume of oxygen flow. It is a dual-scale flowmeter, one is for use with face masks and standard cannula, and the other is used for oxygen-conserving cannula.

SkyOx
SkyOx believes that the pilot should be in control of the rate that oxygen is used, keeping tabs on consumption and the amount remaining, rather than allow each user to just suck up the tank. The SkyOx system comes with its own adjustable-flow regulator and gets rid of individual flowmeters in each line. Its systems include Oxymizer cannula.
SkyOx also offers the Bandit quick-donning headset which has the nasal cannula attached to the headset via a boom arrangement similar to the boom microphone.

Roll Your Own Oxygen
If you want a portable oxygen system but don’t want to be bothered with having to refill an oxygen cylinder or risk being out of oxygen when you need it, a portable oxygen generator may be perfect. The downside is that this is a single-place unit. Currently, there is no way for it to supply additional breathers. Power for the unit comes from either 12-volt ship’s power or a battery pack. The price, ranging from $2600 to just short of $3000, depending on the supplier, is steep. enough to give one pause, especially when a two-place portable unit can be had for $400.

Conclusion
As pulse oximeters have provided data for an individual to determine the need for oxygen for rational thought and safe operations, we are pleased that there a large selection of portable systems on the market. If you are looking for a basic system to provide supplemental oxygen to you and one other person, the AeroMedix price looks attractive to us.
For a four-place system, we think the prices are all reasonable, there is a wide range of choices, and personal preference is going to play a big role in making the selection. We advise looking over the websites carefully and then calling the companies in which you are interested to get more details. We found that each one was more than willing to answer all of the questions we had and were intimately knowledgeable about their systems.