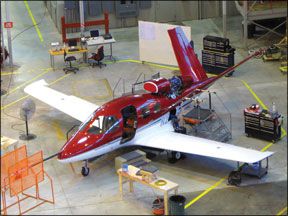 Somehow, encoded into the very DNA of many would-be aircraft owners is an utter inability to apply normal standards and cautions when it comes to making money decisions about airplanes. Its undeniable that some airplane people go woozy and weak in the knees when a new aircraft purchase is afoot.

We cant venture a guess if this is blind faith or unbridled enthusiasm run amuck, but it supports an established trend in the airplane business that lives on to this day: Owners who want a new airplane are often asked to invest in it by writing large deposit checks which, in fact, make them both investors and customers whether they like it or not.

The practice is so common that it has become the unquestioned way of doing business. We dont have a score card on this, but owners have lost bundles of money on position-holder deals and Eclipse Aviations troubles with its EA500 jet have left an unknown number of position holders waiting for refunds. Given this development, does it make sense to continue this practice? Isnt there a better way? What should owners do to protect themselves against companies that dont deliver on the deposits?

Although aircraft companies like to spin the deal otherwise, deposit and position sales generally favor the company, not the customer or are, at best, neutral. Some Eclipse owners we interviewed complained that Eclipses position-holder policy was complex, contorted and put the customer at a disadvantage.

When Eclipse launched in 2000, another jet maker-Safire-was also selling positions for its proposed S-26. It asked for an $8000, fully refundable deposit held in escrow until the prototype flew. (It never did.) The deposit guaranteed an airplane at the introductory price of $800,000, which we now know was a delusion.

Eclipse, on the other hand, had a multi-tiered deposit structure that included two buy-in levels, one at $37,000 and another at up to $155,000. There were complicated cost escalators and refund restrictions related to certain milestones, such as first flight and certification. In a bit of hype no company would touch with a barge pole today, Eclipse also had a bidders club that allowed would-be owners to pay $5000 to take part in an internet auction for early positions. It was all great fun while it lasted and, arguably, ginned up interest in VLJs. Jet makers now live in a different world. The bloom is off the rose that flowered in 2000. So is it time to dump the very idea of customer-funded airplane projects?

“Thats a very difficult question to answer,” says Piper CEO Jim Bass, who comes to the company most recently from the electronics industry, but who also knows the aerospace business. Like Cirrus and Diamond, Piper is funding its new jet with a combination of internal funds and outside capital. He estimates the project will cost about $100 million to reach type-certificate stage.

If there was ever a time when a combination of internal funding and customer deposits could launch either a company or an airplane, those days are long since past. Bass says the capital requirements are simply too intensive and other CEOs agree.

“If you look at an aircraft startup company and how to fund it, the deposits are a very small part of the overall funding requirement. Youll never certify an airplane purely out of deposits; its just not going to happen,” says Joe Walker, who was involved in the Adam Aircraft startup and who is now running Dornier Seaplane Company, yet another startup which plans to build a twin-turboprop seaplane selling for $6 million. Want one? Deposits are $50,000 and go into an interest-bearing escrow account that, theoretically, insulates the customer from risk.

If thats the case-in other words, the deposits dont really pay for much and are in escrow anyway, why do them at all? Market confirmation, say the manufacturers. “You need a commitment from the customer to be serious about buying because were serious about selling. You need to understand where the airplanes are going to go,” says Walker.

Deposits also help attract the big dollar capital from investors-the money that does the heavy lifting-and it adds credibility with suppliers and dealers.

The fact that some companies escrow the money and some dont suggests theres a philosophical departure over what deposits really represent. When Cirrus set out to fund its SJ50 Vision jet, CEO Alan Klapmeier was clear about one thing: It wanted the customer to understand the money was at risk.

Klapmeier says the concept of what an “order” is becomes distorted by overblown claims to the point where people dont believe what they hear and they are thus unable to judge the credibility of the program. “So what we decided is that we would make it a very large deposit and it would be at risk,” Klapmeier says. (If you want a Cirrus Vision, the deposit is $100,000.)

The money isnt escrowed but goes directly into the Cirrus general fund. In exchange for the deposit, you get no promises on delivery date, performance, price or purchase terms, just a position in the line. The deposit is refundable, but guaranteed only as long as Cirrus is solvent. It becomes part of the companys general capital.

As Eclipse was selling and auctioning positions on future jets, a lively secondary market emerged in buying and trading slots. Early in the program, some owners raked in six-figure profits merely from selling positions on the open market, so hyped up was the demand for Eclipses promising little jet. The positions have uncertain value now because buyers arent sure when or if Eclipse will deliver them.

Manufacturers are split on whether the secondary trading is a good idea. Pipers Bass told us he originally thought secondary trading was beneficial because it generates interest in owning the airplanes and generally raises the level of excitement. But dealers pushed back on that concept and now Pipers sales contract prohibits transfer of the positions unless theyre in corporate ownership.

Bass says Piper was more intent on customers wanting to own and operate the jet and less in speculators looking to make a quick buck in trading positions.

“Obviously, speculation can work for you or against you, depending on which way the market is going. The dealer network didnt want to introduce that level of uncertainty into the distribution, especially in a new market,” Bass said.

Cirruss Klapmeier agrees. He says speculation and trading of positions distorts the perceived value and the only beneficiaries may be those lucky few who trade

positions at a profit. Many more may be left holding the bag, especially if the company runs into rough financial straits. No one wants the bad PR of having been involved in encouraging trading if things go sour.

Everyone we spoke to agrees that whether funds are escrowed, placed into the companys general funds, or subject to some other arrangement that appears to protect the buyer from the vagaries of uncertain aircraft development projects, one thing is certain: The money is clearly at risk.

If thats so, arent buyers who make deposits on future aircraft also investors and dont they deserve some kind of return on their money? Pipers Jim Bass sees that as splitting hairs. He says that customers shouldering some of the risk is a given and what they get for their investment is a place near the front of the line for what Piper views as an exceptional product. In the past, some companies have given early buyers price breaks, but this trend seems to be on the wane.

“Anybody who buys a product in any company is, in some way, investing in that company. If you want to accept that interpretation, then theyre an investor,” Bass says. But Bass says that in every major development project-civil, military or commercial-the customer is always asked to step up with money to put some skin in the game.

So how does a buyer avoid or minimize the risk? Our view-and this seems to be shared by others in the industry-is that its directly analogous to buying stocks. The buyer presumably does due diligence research, adds up the numbers and either buys or not. No matter how good the research, theres still a risk of losing all of your money. There is no return on the investment other than a place in line and/or maybe a price break.

Cirruss Klapmeier says he cant make this any plainer: The company is promising you nothing other than an airplane. No price, no performance, no schedule and, in the beginning, not even an inkling of how many engines it would have. As long as Cirrus stays in business, you can ask for the money back at any time. If the business fails, youre just another creditor.

Were not sure if Eclipse depositors now feeling burned understood this, but we suspect they did. Eclipses complex, milestone-based refund policy may have led some buyers to sense a different reality, in our view, but it was just as risky.

Reading the fine print in the deposit contract is always a good idea, but in the end, that probably makes little difference in how risky it is to buy an airplane position. So what would Bass tell his brother-in-law if he were about to buy a position in the latest VLJ?

“It just like the stock market,” he says, “Never invest money that you cant afford to be without.” Klapmeier agrees. “If you know that the airplane is exactly what you want and youve got to have it, make the deposit. Otherwise, Id advise him to hold onto his money.”