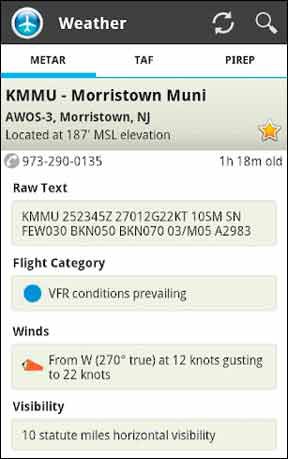 Last month we dug into moving-map apps for the Android platform, but sometimes you just want a quick check of local weather on your phone to see if it’s worth a trip to the airport—or if it’s time to push the “no-go” button on your plans and go have a beer.

We think the bare minimum for this would be METARs and TAFs—ideally presented graphically on a map with text details available—local NEXRAD and PIREPs. Armed with this ideal, we forayed into the Android Market and came up empty handed.

That’s not saying there’s nothing out there. Here are our front-runners, so you don’t have to gamble your five dollars on which one does what.

FlightIntel and FltPlan
Free is good, and that’s why if you have a Droid phone you should download FlightIntel for pilots. The app is really basic weather plus A/FD data and approach charts, but it’s well done and easy to use. You can select your airport from a list of favorites or nearby airports. But a nice plus is that swiping across the favorites screen loads a list with quick weather for nearby airports.

This isn’t as good as having the METARs on a map, but it gives you several airports at a glance. We’d like to see the actual ceilings and visibilities in this list, however, rather than just an icon for VFR to LIFR. The icon does show winds and cloud cover.

Tapping any airport from any view brings up details you’d expect from the A/FD, such as frequencies and runway lengths. But the METAR also appears in this list and lets you call up TAFs and PIREPs. The navigation sounds odd, but it’s actually fairly intuitive in practice.

The no-fee app actually only misses our want list by not offering NEXRAD and not putting METARs on a map view. It also gave us some trouble in some views on our Droid tablet, but its pretty clearly optimized for a phone.

FltPlan.com’s popular flight-planning website is accessible by any web-enabled phone, but they also have a free Droid app that offers some handy shortcuts. You can save six airports and six routes for one-button briefings. These are essentially the same briefings you’d get from quick weather or quick route weather on Fltplan.com: METARs, TAFs, PIREPs, NOTAMs and an option to see a map with your route and the latest NEXRAD. It’s not the cleanest interface or super-easy to read on a phone, but it’s pretty close to hitting all our punch-list items.

There’s also A/FD data, additional airport info and the option to download and view approach plates. Both FlightIntel and Fltplan.com can call the phone numbers they list for ASOS recordings or rental cars.

Aviation WX by GADSoft
There are a handful of apps that claim the name “Aviation Weather,” so be careful if you buy one that it’s the one you want. We like this one by GADSoft. It has a trial version that’s limited to the Massachusetts area only—great if you live in Mass., as you might never need the $4.99 full version.

The app opens and pulls the weather for your local area on a basic Google map (or satellite map if you prefer). Current METARs are color-coded for easy reference and there’s an optional wind barb. Tap any airport and you get the detailed METAR and TAF in text.

Missing, however, is a NEXRAD overlay, but this is in the works.. There’s also no nearby TAF function, so if the airport you tap doesn’t have a TAF, you’re empty-handed. Even with these shortcomings, this is the best at-a-glance app we saw.

Quickweather
We picked Avilution’s Aviation Maps as our favorite for now in full-up moving map apps for Android. The company also offers Quickweather for a one-time fee of $4.95 (again, beware that there are multiple apps called Quickweather). The app pulls up a list of your favorite airports, similar to FlightIntel, with current conditions. But unlike ForeFlight, tapping one pulls up a wealth of data in a long list. It’s the same data you get from the full-up mapping app in fact.

The list includes the METARs and TAFs, but also a static image of local NEXRAD radar, freezing levels, SIGMETs and AIRMETs, surface winds, NOTAMs and a local TFR map. One item we really like is that Quickweather includes the Area Forecast. Pilots tend to focus on TAFs for a forecast, but by their nature TAFs often don’t include forecasts for scattered showers or other phenomena. PIREPs are still noticeably lacking.

ForeFlight Weather
Sorry, but this isn’t ForeFlight Mobile HD for the iPad/iPhone. It does use some of the same clean design, however, which makes it the easiest to use app of the lot. It opens with a favorites list of airports, color-coded for VFR through LIFR, as well as winds. These are just a list, though.

Tap any one and you get text for METARs and TAFs that are both decoded and color-coded for easy reading and alerting you to changing conditions. There are text winds as well as animated radar and satellite imagery at five-zoom levels.

There’s no scrolling or pinch zooming, and no PIREPs. The lack of zooming and scrolling freely is a real miss when it comes to seeing how NEXRAD might affect your route. ForeFlight has made it clear that they are focusing their development efforts on the iPad platform, so don’t expect more from this app down the line. At $9.99, it’s a relative fortune for an app. But then again, that’s like a few minutes of flight time.

Honorable Mention
AirWX is available for the iOS as well as Android, but it’s a stronger contender amidst the slimmer competition of Droid. Tap one of your favorite airports, or choose from a nearest list, and you can get METAR/TAFs, PIREPs, NOTAMs, major weather charts (such as a surface analysis or prog charts), static NEXRAD and even approach plates.

The app is quick to load data and in active development. At $6.99, it’s not the best buy out there, but it could develop into one. There’s a 15-day refund policy to try it out as well.

A similar app is Aviation Weather from NOAA/NWS. This one is really a portal to pull text reports, RADAR images and a bit more from NWS servers, but it works well and is free if you can put up with the adds. Or you can pay $0.99 to get rid of them. The app is cumbersome to use for METARs et al., as you can only enter one airport at a time, but it’s quick for animated NEXRAD and static graphics, such as graphic AIRMETs.

FlightBriefer will set you back all of $0.99. For the price, it’s not a bad deal. On the plus side, you can put in departure, destination and airports along the way to get METARs, TAFs, winds and PIREPS. We had an issue in testing where it showed no NOTAMs for an airport that had published NOTAMs but didn’t see that again. The developer is checking into it. Flightbriefer can pull up TFRs, but they aren’t in relation to your route—it’s the full national list. FlightBriefer can retrieve DUATs briefing and file a flight plan.

Better to Come? Maybe
There’s definitely a space in the market for a fast, complete app for weather information. We hope one of the contenders mentioned here takes the extra steps to fill in the holes. Something like Voyager’s FreeFlight for iPhone would be a welcome addition to Android. It’s equally likely, however, that the final winner will be a version of one of the more complete moving-map apps that simply works as well on the phone.