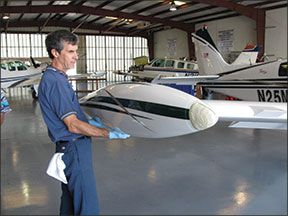 Being able to make a trip nonstop is more than just convenience—it can be a safety of flight issue as the risk of an accident is highest during takeoff and landing. The reality is that most flights of four- and six-place airplanes are conducted with only one or two of the seats occupied and at something below gross weight. For many owners, that means that some sort of auxiliary fuel tanks can give their airplanes more range and potentially increase safety.

We surveyed the six major companies that provide aux fuel tanks and found that they weren’t as expensive as we expected, and there are some that can tack on at least two hours of fuel for a large proportion of the general aviation fleet. While every mod involves tradeoffs, the penalties in terms of drag and weight seem to be minor and the benefits—including, in some cases, gross weight increases—can be quite nice.

Mike Jones aircraft
The venerable mod shop, Colemill, which hot-rodded a lot of GA airplanes over the years, went under, pun intended, following a tradition established by Aeronca and the Piper Comanche—the shop was devastated by a flood. The fiscal aftermath was not pretty. Fortunately, Mike Jones, in Murfreesboro, TN, purchased the STCs and what was left of the jigs and tooling and is carrying on with the mods, including a combination tip tank and winglet for most of the Beech Baron series. The tank/winglet carries 15 gallons of fuel a side, has a separate filler cap and uses a transfer pump to move the fuel into the main tank. Besides adding a total of 30 extra gallons, the airplane gets the performance benefits of winglets, although no numbers are provided for the claimed increased rate of climb, faster cruise speed and improved single-engine capability.
The mod is approved for virtually all Barons and is priced at $29,900 for a pair, installed.

D’Shannon Aviation
For years D’Shannon has specialized in mods for Beech Bonanzas, notably tip tanks. It currently offers a 20-gallon tip tank—all usable—made of composite material. It weighs 34.2 pounds installed. Fuel is transferred to the main tank on the same side as the tip. Quantity is monitored by either a gauge on the panel or a sight strip in the side of the tank that allows the pilot to see the fuel in the tank.

If the airplane has a magnetometer in the wing tip, it can be placed in a pocket in the tip tank, avoiding the need to relocate the magnetometer. The tanks include LED navigation lights and are wired for LED strobes. There is a lifetime warranty on the tanks.

As with any tip tank, installation provides an “end plate” effect that provides aerodynamic benefits, although no performance improvement numbers are provided. One of the other benefits is an increased gross weight from 150 to 300 pounds for most installations. It can go up by as much as 400 pounds for some IO-550-equipped Bonanzas. The weight increase can be carried in the tanks themselves or in the cabin.
The tanks are shipped primed, ready for paint. Price is about $12,000—it varies slightly with the specialized needs of the airplane. Installation usually runs something over $3000 but less than $4000. They can be installed on all models of the Bonanza except the B36TC. The gross weight increase applies to all models except the straight 35.

D’Shannon told us it is about to release a carbon fiber combination wing tip extension and 15-gallon tip tank that will increase the wing area and span of a Bonanza to that of a B36TC Bonanza. It will include flush antennas and lights.

J. L. Osborne
Aluminum tip tanks have been built by J. L. Osborne for over 50 years and are now available for virtually all models of the Bonanza, most models of the Navion and the Piper Comanche line, single and twin. Tank capacities—all usable—for the Bonanza and Navion are 20 gallons; for the Comanche, it’s 15 gallons. Weights range from 19-27 pounds.

Depending on the installation, the fuel is either transferred to the corresponding wing’s main tank via a transfer pump or gravity feeds to the fuel selector, which is changed as needed to reflect the number of tanks directly accessible. Some single-engine installations allow for feeding the engine from both tip tanks at the same time, something we like, as dealing with an imbalance can range from a minor irritation to a significant distraction.

The installation allows for a gross weight increase for most airplanes. It varies from 50 to 200 pounds, however, for Bonanzas with at least 300-HP engines and the Osborne tip tanks, gross weight can be increased by a whopping 424 pounds to 4024 pounds, the highest in the industry.

Price ranges from $6000 to $12,000 depending on the model airplane and installation kit. Installation time runs between 30 and 50 hours.

O & N Aircraft
Creators of the Silver Eagle turbine conversion of the Cessna P210, O & N Aircraft has long been making auxiliary fuel tanks, primarily for Cessnas, that go in the aft baggage area. With a separate, flush filler, they use a transfer pump to move fuel to the right main fuel tank. The gauge for the aux tank is placed near the fuel selector, and a light illuminates when the transfer pump is activated. It shuts off automatically.

The tanks vary in size from 14.6-gallons for the Cessna 150/152 through a 29-gallon tank for the 210. Most raise the floor of the baggage compartment some distance. The allowable weight for the baggage area must take into consideration the weight of the fuel being carried in the tank. The aluminum tanks are surprisingly light; the heaviest is only 22 pounds. Prices range from $2450 for the Cessna 150/152 through $4800 for the P210. Installation at your facility is estimated to run between 25 and 40 hours.

While we have long been nervous about carrying fuel in the fuselage, we have looked for but have never seen any data that baggage compartment fuel tanks increase the risk of post-crash fire.

O & N also makes a baggage compartment tank for the Grumman-American Traveler, Cheetah and Tiger—AA-5, -5A and -5B. Holding 18 gallons, it is a tank-within-a-tank aluminum box that rests on the right side of the baggage area, behind the rear seat and feeds the right main fuel tank. Price is $4350, installation is estimated at 25 hours.

An 18.5-gallon, wing locker tank is offered for several of the 300- and 400-series Cessna twins, and up to four may be installed in an airplane. They are aluminum and sell for $4200.

Met-Co-Aire
Making fiberglass tip tanks incorporated into new, Hoerner wing tips for the Piper Apache and Aztec, Met-Co-Aire designed the 24-gallon tanks to be user-friendly. Each has a check valve where it plumbs into the fuel line for its respective main tank, effectively adding 24 gallons of fuel to each wing without having to mess with a change to the fuel selector or installing a transfer pump. Each tank has its own filler and quick drain. There is no separate fuel gauging system—a placard is attached to the existing gauge to indicate the increased fuel capacity.

A pair adds 25 pounds to the empty weight of the airplane and costs $9500. Installation time is estimated at 25 hours.

Flint Aero, Inc.
Flint Aero has been making aux tanks for the wings of high-wing Cessnas for over 30 years. Other than the 150/152 and pre-shutdown 172 line, if you own a high-wing Cessna, the chances are that there is a Flint tank for it.

The tanks are either internal—slid into the existing wing from the end—or tip tanks that add span to the wing. Many of the tip tanks allow a gross weight increase, although some require some of that weight to be fuel in the tip tanks and on some installations the landing weight does not increase. All have their own filler and drain and use transfer pumps to move fuel to the main tank.

The tip tanks add from 36 to 52 inches to the wing, depending on the airplane. Most allow a gross weight increase, which ranges from 200 pounds to as much as 400 pounds on the Cessna 185—although for some installations, there must be a minimum quantity of fuel in the tip tanks to take advantage of the gross weight increase. The tanks range in usable capacity from 13.5 gallons a side to 19.3 gallons. Prices range from $8800 for the Cessna 206F and G to $10,145 for the 337 Skymaster.

Conclusion
We like the peace of mind having extra fuel on board buys us when the weather goes down or we want to make a trip nonstop. Having full aux tanks the time when you have to divert 200 miles because of widespread, unforecast fog may well pay the price of admission for those tanks.

On the hard reality side, while you won’t recover the full cost of the tanks and installation, you will up the resale value of the airplane, and you’ll enjoy the savings of fewer stops and the ability to tanker less expensive fuel while you own the machine.