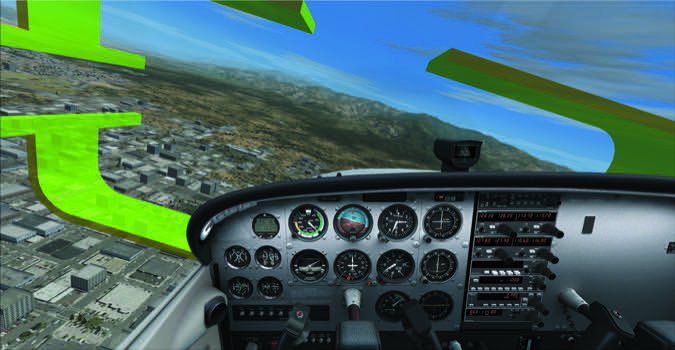 The most basic stepping stones to be traversed by a student pilot going after a certificate involve figuring out where she or he wants the airplane to go and learning the monkey motion involved in causing it to go there. We’ve gotten all sophisticated over the years and refer to that sort of thing as flight maneuvering tasks. Nevertheless, the process of teaching student pilots the rudiments of shoving an aircraft through the sky—straight and level flight (at the same time?!), turns, climbs, descents, slow flight, stalls and takeoffs and landings—have not changed a great deal since the Wrights set up their flight school. An instructor describes the maneuver, demonstrates it and then has the student practice it repeatedly, with coaching and feedback, until the student demonstrates the ability to perform it within acceptable parameters.

The process takes expensive airplane time—as the Russian proverb says, “Repetition is the mother of learning.” A student does steep turns until his internal gyros tumble as he strives to maintain the desired bank angle, altitude and airspeed while—assuming he has a good instructor—getting suggestions about such things as pitch attitude, where to look for reference points, how to quickly glance at the altimeter and airspeed indicator and use of trim that help him perform within tolerances.

The system of instructor-directed, repetitive practice has worked for over 100 years and turned out some pretty impressive pilots from Dr. Jimmie Doolittle through Patty Wagstaff. However, given the sophistication of flight simulator visual displays, artificial intelligence technology and what we’ve learned about teaching people to fly, why can’t a student do most of her maneuver repetition and practice time in a simulator being coached and evaluated by a computer program at less than half the cost of flight time in a Hobbs meter-equipped airplane with a flesh and blood CFI?

R & D skunkworks was unveiled at OSH this year and is concisely described by Redbird as a “simulator-based maneuvers training supplement designed to help you achieve your goals faster and for less money.”

After spending time going through a number of the individual maneuver modules and their written and video introduction to the specific maneuver, flying the maneuver in the simulator while receiving real-time coaching from the software and then having a detailed score generated within a few seconds, we came away impressed.

We’ve been involved in the flight training world for over 40 years and have observed that every single claim of “revolutionary” development or “game changers” or “the next level” in that world has turned out to be nothing but the product of the south end of a northbound bull. We have, however, during that time seen solid, real evolutionary steps that improved the quality, efficiency and effectiveness of flight training while helping to cut costs—notably in the early 1970s when Cessna developed integrated and standardized curricula through its Cessna Pilot Centers and, later, the introduction of good-quality video into flight training programs.

We think that because of Redbird’s thoughtful integration of the objective standards of the new FAA Airman Certification Standards (ACS) for the private pilot certificate, high-quality visual displays in its flight simulators, artificial intelligence allowing real-time coaching and the ability to objectively score a student’s performance of the basic private pilot flight maneuvers, we are about to see another evolutionary step forward in flight training. That’s a big deal, in our opinion.

Because GIFT does not remove the CFI from the equation so much as it provides a CFI with an effective tool to train more students in a given amount of time as well as make more money for a flight school while—seemingly paradoxically—saving money for flight students, we think Redbird’s GIFT can prove to be a good thing for all involved in the flight training world. We do note that active use of GIFT will probably result in a decrease in use of flight school aircraft per student, per rating—with an increase in simulator time. However, our research for this article indicated to us that flight schools make more money per hour from their simulators (low overhead) than from their airplanes even though they generally charge at least twice as much per hour for the aircraft than the sims.

For $249, a student purchases a license to use the Redbird GIFT software in any Redbird simulator in which GIFT is installed—currently all are Advanced Aviation Training Devices (AATD), although more basic sims are expected to be set up for GIFT. Right now the only airplane simulated is the round-dial and G1000-equipped Cessna 172. The Piper Archer is next up.

The license has no expiration or termination date—once it’s purchased and operative, the student can use and review the text and video of the private pilot GIFT modules on an internet-connected device and practice flying the maneuvers in a Redbird sim. He can do so forever. After flying a number of the modules, we think that a few repetitions in the sim would help any pilot kick his skills up a notch in preparation for a flight review.

Josh Harnagel, Redbird’s VP of marketing, explained that the GIFT modules exist to introduce students to the maneuvers in a distraction-free atmosphere. There is no holding short, number eight for takeoff with the Hobbs running—the student tells the simulator to start a particular module and whambo, the airplane is in flight, in position and configured to start the maneuver.

Flying most of the maneuvers takes less than five minutes and, once complete, the simulator pauses—and stops running up cost. The system generates an objective evaluation of the student’s performance on the maneuver. It appears graphically—charting, for example, indicated airspeed, altitude and heading—and textually, comparing the student’s performance to the ideal, and providing a percentage grade. 80 percent is passing, 90 is very good. Between 95 and 100 percent the scale becomes roughly exponential, making it extremely difficult to score 100—something Harnagel said Redbird learned from computer gaming as it has proven to be a powerful motivator to users. In one of our exercises, we kept the airspeed within 0.2 knots of what was called for and scored 99 percent, not 100.

The evaluation for each maneuver is kept on the student’s account on Redbird Landing, a non-sales site that stores the student’s GIFT module information. The student can share her scores with her instructor, to help tailor subsequent instruction in the maneuver in the airplane.

While a private student can log 2.5 hours of AATD simulator time (with an instructor) toward the certificate and a student using GIFT would be financially foolish not to do so, Harnagel pointed out that GIFT is not specifically designed for logging time, it is to teach the student to understand and fly the maneuver so that he can step into the airplane and demonstrate that he can fly it with a minimum of repetition in the airplane.

As an aside, GIFT deals with the problem of unsupervised students in a simulator seeing if they can do aerobatics or fly under bridges by simply returning the simulated airplane to straight and level flight if parameters of bank, pitch or speed are exceeded.

We did note that in trying the takeoff module, we were barely able to stay on the runway due to overcontrolling the rudders and a lack of lateral Gs for feedback. Aspen Flying Club’s assistant chief pilot Jon Nafi discussed our perception that the simulator was more difficult to fly than the airplane—and agreed. He pointed out that the student who learns a maneuver through GIFT in the simulator will generally find that it’s easier to fly once she gets into the airplane, making for a positive learning experience and even more rapid mastery of the maneuver.

By coming up with a way for student pilots to engage in self-directed practice aimed at rapidly learning the maneuvers for the private certificate in a simulator, we think Redbird has taken the next evolutionary step in primary flight training in efficiency and keeping costs down. We understand GIFT for instrument rating maneuvers will be out next year. We’ll be watching.