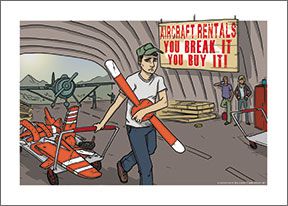 According to GAMA statistics, there are 611,000 active pilots in the United States and only 223,000 registered general aviation aircraft. Even allowing for air taxi airplanes, clubs and partnerships, this means that lots of us are flying airplanes that we don’t own. Some of us rent from local flight schools, some borrow from friends.

Few flight schools can afford to carry insurance that gives the student or renter pilots much, if any, protection. And while permissive users of privately owned airplanes are usually automatically included under the aircraft liability coverage, insurers will frequently subrogate to recover the cost of physical damage.

With new singles tipping the scales at over $600,000, this is an increasingly risky proposition. Even an old beater can cost a great deal to repair. Airplanes are expensive, delicate things that can be ruinously expensive to repair (even more so for the people riding with you in them). The aviation insurance industry is ready with a solution: Personal non-owned aircraft liability insurance, or renter’s insurance.

Sue-me coverage
Renter’s insurance typically contains two parts: The first protects the renter from lawsuits brought by passengers or others who claim that they suffered bodily injury, or people who claim that the renter negligently damaged their property while using the rented aircraft. The second part, which is optional, protects the renter from lawsuits arising from damage that he or she negligently caused to the aircraft.

Both parts of renter’s insurance is “sue me” insurance, because coverage is based on the renter being at fault, or at least being accused of it. If the renter is not at least blamed for negligently causing damage or injury, there probably is not any coverage. But if there is a claim of negligence, the insurer will provide attorneys to defend the renter. And if the owner of the aircraft makes it stick, the renter’s insurer will pay.

Personal non-owned aircraft coverage is tailored to the student pilot, the renter pilot and almost anyone else borrowing or using an airplane for a non-commercial purpose. Most of the companies also offer additional coverage for individual CFI’s while they are providing flight instruction.

Keep in mind that a renter’s policy will usually not cover the owner(s) of the airplane, an airplane that is leased for more than 30 consecutive days, any commercial operations or any type of aircraft not listed in the policy.
In its most basic form, a non- owned policy will cover use of a non-pressurized, single-engine fixed-wing landplane with no more than seven seats and no more than 450 HP.

Coverage is available from one or more companies for multi-engine airplanes, floatplanes, experimental aircraft and even piston helicopters. Available non-owned bodily injury and property damage liability limits range from $250,000 per accident to $1,000,000 per accident, limited to $100,000 per person or per passenger. Aircraft damage coverage ranges from $1000 to $200,000. We wish that higher liability limits were available, especially for bodily injury, as it generally is for owned aircraft.

Major Players
Providers of non-owned insurance include AVEMCO, AIG, QBE Aviation and Starr Aviation. Global Aerospace also writes a non-owned program for EAA members. Each provider has a different policy form and each tries to offer something unique.

Starr Aviation has a CFI program
tailored to members of the Society for Aviation and Flight Education (SAFE). AVEMCO provides enhanced coverage to CFIs who are members of the National Association of Flight Instructors (NAFI). AIG Aviation offers coverage on behalf of AOPA members and along with AVEMCO, is one of the two original providers of this coverage.

AIG and Starr Aviation both provide coverage for piston helicopters. Starr created a mobile app that allows policyholders to view their policies, find claims contact information, an accident checklist and provide proof of insurance on the fly.

AVEMCO can be accessed directly by individual pilots. The other companies are reached through brokers.
what to avoid

While all are similar, each of them has specific coverage territories, definitions of cost-sharing and types of aircraft that are included. Words in quotes or boldface have specific meaning that can be found in the definitions section of the contract.

Make certain that you know what types of aircraft are covered on your policy. Discuss with your insurance provider what kind of flying you do and in what kind of aircraft.

Some policies exclude experimental aircraft, or kit-built aircraft during a fly-off period. Some exclude floatplanes. Many exclude twin-engine airplanes unless you specifically request it. Most exclude helicopters, unless you specifically purchase extra coverage. If you are being paid to be in an airplane and you are not a CFI, you need the kind of non-owned coverage that flight schools and commercial flying services carry.
If you rent, ask the FBO how much insurance they have and whether any of it protects you. You should understand the terms of the rental agreement and whether the FBO requires you to be responsible for the deductible or the full value of the airplane. In some cases, you might be covered by the school, but you need to understand how much coverage they offer.

“We do not require renters insurance. It’s included in our pricing. We own our entire fleet so our prices aren’t dictated by leasers, but by actual operating costs,” said Kevan Ross, the chief instructor at Connecticut Flight Academy in Hartford, Connecticut. CFA’s fleet has a clean accident and incident record. We wonder if that policy might change if that record were to change.

Still, look for a renter’s policy that carries a no-fault deductible provision. This provision allows your policy to pay the flight school’s deductible even if the damage to its airplane was not your fault. CFA’s Ross told us his school would pick up the claim deductable. That’s an exception, rather than the rule.

If you own a share of an airplane as a partner, or if you are in an equity-based flying club, ask if there is a non-owned product that will help you to increase your coverage. Although owners are excluded in most of these policies in capital letters, some carriers will cover partners and club members if their ownership percentage is 20 percent or less.

In addition to what is offered in off-the-shelf products, some underwriters will provide higher limits of liability, or specialty coverage. In general, we feel that the market for non-owned liability insurance is fairly well served and most premiums are palatable.

For an arguably good price, you can get coverage for the vast majority of types of planes and helicopters that you are likely to rent or borrow. Our main reservation is that current limits of bodily injury coverage available in these policies are lower than what many pilots are comfortable with.