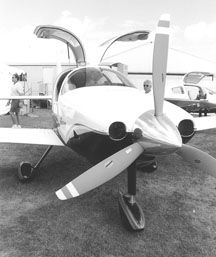 If the Zen of abstract needles and steam-driven gyros is your idea of a good time, the emerging GA cockpit may soon be a disappointment. The flight-deck-as-video-game concept that NASA has been flogging for the past decade seems about to come true.

At this years EAA AirVenture bash in Oshkosh, we saw the first workable version of a highway-in-the-sky virtual reality 3D display. Never mind that some ankle biter broke the thing with a series of impromptu aileron rolls and a software glitch or two hobbled the systems higher features, we were impressed.

Lots of Color
This system-called SmartDeck-is no breadboard college engineering project. No lesser than BFGoodrich is behind it, pledging to have flyable hardware within two years. Even if it takes twice as long, they may be onto something.

A Goodrich spokesperson told us that SmartDeck will be developed specifically for GA aircraft. (GA as in Gulfstream or GA as in used Bonanza, we asked.) Stay tuned, says BFGoodrich. (616-949-6600 or www.bfgavionics.com.)

SmartDeck is merely the newest player in what is becoming the hot avionics item of the new century: The color moving map display. We saw a new entry called the Air Scout from German manufacturer Becker ($6000 with self-contained GPS), a couple of interesting developments in PDA-based displays and, best of all for buyers, some serious show discounting on established products, reflecting what must by now be a glut of offerings for a limited buyer pool.

But Goodrichs SmartDeck drew the serious ooohs and ahhhs. In its prototype version, it consists of a pair of high-res color LCDs, one to display 3D flight data, a second for two-dimensional navigation, weather and performance data.

There are no gyros or conventional displays of any kind; the pilot merely looks at the three-dimensional display and flies the airplane through a series of windows which define the course at the appropriate intervals. The landscape is represented as an unfolding gridwork, with a vanishing point in the distance.

Airways-if they still exist when this thing becomes a reality-look like three-dimensional dotted lines across a virtual reality landscape, with target windows vanishing into the distance. Approaches are depicted as descending rows of windows, complete with marker beacons and a three-dimension control tower at homeplate.

Flight data-airspeed, pitch vector, groundspeed and the like-are depicted HUD-style in the sky above the virtual landscape. Weather displays from Stormscope and radar can be superimposed. What will such a system cost, you ask? We did, too, but Goodrich is cagey. We suspect theyre too early into development to peg price. Our guess is it wont be competitive with a Garmin 430, so the Warrior crowd neednt apply. (Speaking of which, we saw the first used 430s: $6000 for the complete system. Ah, we barely knew ye…)

Datalink
From the we-wondered-when-someone-would-think-of-this file comes a shortcut to the oft-promised but illusory weather datalink for the GA cockpit. Thus far, everyone thinks this is a great idea and pledges to buy it when its available. Yet the technology remains too ill-formed to judge. The latest entrant comes from Flytimer Corp., www.flytimer.com or 978-318-0600) which proposes to use the existing airline ACARs network to broadcast on-demand text and graphical weather data on a subscriber basis.

Youd have to buy Flytimers dedicated VHF box-about $2500, plus installation-then display the weather output on a color Palm-type PDA or, eventually MFDs such as the UPSATs MX-20 or the Garmin line.The service would cost about $45 a month for enough data volume to download about 70 NEXRAD snapshots or bushels of text data. Beyond that, youd pay for additional use.

An already established datalink company, Echo Fight, Inc., announced two new color GPS moving map units, both smaller than its first offering, the StratoCheetah. The Flight CheetahFL90 retails for $2496 and the 180 will sell for $2995. Both are color GPS maps that incorporate a datalink display option from information broadcast by Orbcomm satellite links. The pricier version has a brighter, more sunlight readable screen.

Besides the display unit itself, you need a small satellite receiver called a subscriber communicator, plus an antenna. The communicator is included, the antenna is a $180 add- on. EchoFlight offers various data packages, ranging from $9.95 a month for minimal occasional usage, plus $1 per in-flight message to $55 a month which allows unlimited inflight messaging, including e-mail. EchoFlight says the FL90/180 will be available this fall. EchoFlight is at 888-948-9657 or www.EchoFlight.com.

Two other potential datalink sources also announced services. Bendix/King and ARNAV have joint agreements with the FAA as service providers for the agencys

Flight Information Service Data Link (FISDL), which became operational at AirVenture. Like the other options, FISDL requires a dedicated airborne radio receiver (VHF) but works via a ground-based network.

Having bought a design from NavRadio two years ago, Bendix/King will soon have hardware to ship, the KDR-150 remote box ($3000 or thereabouts), which can receive and display text or graphical weather on any of the popular multi-function displays. ARNAV has its own competing hardware. Textual data will be broadcast and available on demand for no charge while graphical products will be sold on a subscription basis. (www.arnav.com and www.bendixking.com.)

The Web Provides
Following the spring market shakeout, we thought Web-based businesses were taking a developmental breather but evidently not in aviation. The emerging trend seems to be on-line weather/route planning services, adding yet more potential to the glut of Web-based weather already available. A brief list:

enflight.com: Partnering up with AOPA and DynCorp. Government Systems, a DUAT provider, this service allows you to log on, enter aircraft operating parameters and then specify departure and destination.

It then does all the heavy lifting, including fetching text and graphical weather products. Most of the service is free but some products entail a minimal fee. Available in late summer. (www.enflight.com)

Aeroplanner.com: Same as above, but more services, including logging, the ability to print out strip sectionals describing your route and even order pilot supplies. The core service is free; you pay for maps and, the company hopes, buy stuff being hawked in the banner ads. (www.Aeroplanner.com)

iPilot.com: The one-stop destination for private pilots and aviation enthusiasts is how this site describes itself. (Its actually been available for awhile.) Again, lots of personalized weather options but also aircraft comparison guides, online groups, Exam-o-Gram testing and airport data. The cost? Free, naturally. Its advertiser supported. (www.iPilot.com)

webfbo.com: Although not a weather getter, this new service provides online aircraft scheduling, accounting, purchasing and other FBO-related support. It purports to eliminate the need for in-house accounting software and money-consuming office computer networks. (www.webfbo.com.)

PlaneLog.com: Again, no weather services but a Web-based means of converting your paper aircraft logs for online access. Theory: Youll have them available on the road without the risk of carrying them in the aircraft and the valuable logs are protected against loss. The basic cost is a $495 buy-in for set-up then $150 a year. (www.PlaneLog.com)

Other Gadgets of Note
With the Motorolas satellite-based Iridium phone system driven to economic extinction, AirCells airborne system is the one to beat. But its not the only choice. Global Star is selling an airborne-usable phone that operates both on the ground and in the air, with no mode switching. (Actually, its a tri-mode phone, capable of digital, analog and airborne modes, switching automatically.)

Tiny Icarus Instruments got burned in the Iridium flameout, having developed a happy box to marry up the Iridium phone to the aircrafts audio system. But the grass doesnt grow under Icarus owner Steve Silvermans feet. Hes converted the box for use with a Global Star phone and the system is ready for market.

While were on the subject of Icarus, the company has introduced a new product called NavAlert II, which combines the features of its clever altitude alerter/tank timer with customizable navigation displays, including distance to waypoint, ground track, track error and other data. All of this is displayed in a miniature sunlight readable LED small enough to mount anywhere. The price is $1595.

Given the popularity of high-end audio systems for cars, its a mystery why no one has developed a decent CD player for aircraft. Mystery solved. PSEngineering rolled out the PCD1700, a combination stereo CD and intercom. You can buy it in one of two versions: CD only for $695 or both for $995. (Looks like pairing the two is the way to go.)

We thought the passive headset market was quite well served, thanks, but LightSPEED Aviation thinks otherwise. They announced a new passive headset series called QFR. The Solo model-which is passive only-will sell for $150, while the Cross Country model, which includes active noise cancellation but with improved passive attenuation, will sell for $279. Shipping later this year.

While on the subject of hearing protection, a company called Etymotic Research has been making high-performance ear plugs for the industrial market and is introducing them into the aviation field.

Got a bird problem? An outfit called Birdbusters has developed a nifty device that fits on the top of the tail and the prop to keep the critters from perching and…well, covering your airplane in crap. With a loose cage of wire on a steel shaft, it doesnt harm the birds, just keeps them from landing. Contact 703-299-8855 or www.birdbusters.com

Oh, Yeah…Airplanes
We didnt see any life changing developments in the airframe world this year, although a couple of companies sure tried to make news with minor announcements.

We got a look at the Lancair 400, which was flown in for the event. Same basic airframe as the 300 Columbia, but a twin-turbocharged TSIO-550 instead of the normally aspirated IO-550. Documented speed claims are impressive: 232 knots at 17,500 feet, with the promise of greater speed in the flight levels. Not bad, although Lancair needs to get busy delivering Columbia 300s, we would imagine.

Meanwhile, the award for the most over-the-top PR and promotion surely goes to Eclipse, the company thats pushing a slick little two-engine jet based on the emerging 750-pound thrust Williams International EJ22 engine.

Will these guys produce? Were not sure but if they ever do, theyve got the sales pap down pat. From what amounted to a small village erected in the display area, Eclipse was selling everything from shirts to coffee cups emblazoned with the company nameplate.

No airplanes, of course, but when has that ever stopped a creative marketing department?

Also With This Article
Click here to view “I Wanna Believe, I Really Do.”