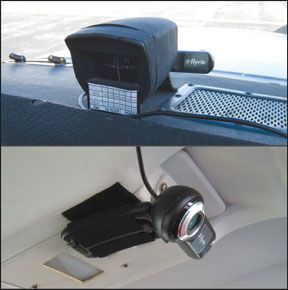 Its easy to pick out a couple of pilots talking: Look for the folks bending their hands through the air trying to recreate a visual for that death-defying turn to final immediately followed by three consecutive touchdowns from one landing attempt.

debrief exactly what happened right before the CFI hollered, “My airplane!” These three solutions hit different, but overlapping, missions. None are cheap, but all do the job they set out for.

The NFlightCam is small and to-the-point, so we will be too: The thing works great.

The camera is actually a ContourHD 1080 wearable camcorder thats less than four inches long and weighs about five ounces. NFlightCam replaces the standard mic with a circuit and cable to record cabin audio from the intercom. Thats plugged into any headset jack and can be connected inline so you can use a headset in the same outlet.

The lens has a 110-degree field of view, so you can mount it high behind the front seats to get both cockpit and runway ahead. However, the cabin may be somewhat dark due to the brighter view outside. You can mount it at any angle because the lens rotates, complete with a button to project two lasers for getting a level-image reference. After that, slide a beefy switch forward to record and aft to stop.

The back face of the camera slides off to connect move files to the computer via USB and recharge the battery, which the company claims will last two hours. We ran out of recording space after 30 minutes on the 2GB microSD card we had. The camera will take up to a 16GB card. The package includes software to configure the camera for resolution and sound level, as well as download the movies. That software is refreshingly simple and available for both Mac and Windows.

The NFlightCam is $399 from the company or from outlets like Sportys (who lent us one). A new version with an internal GPS is $499. We havent tried that one,

but it claims to allow playback of the flight on Google Earth.

The Flyvie Pro recording system captures video from two cameras-one trained on the pilots and panel from behind, and one looking forward out the window-as well as intercom audio and GPS flight path. These are all recorded on a netbook computer to be played back later as part of a flight training debrief.

Getting the Flyvie Pro cameras set up is a bit of a chore in that you must both mount them and then connect them to the netbook in a preview mode to ensure the picture is what you want. With that done, you have to find places to run and secure cables from both those cameras, a USB GPS and an audio plug that run to the netbook. Flyvie supplies well-marked cables, clear instructions and all the Velcro you could want to make this work, but its not something youd want to move from airplane to airplane regularly.

Once its all connected, you can stow the computer away and it will start and stop recording automatically once the GPS sees youre moving. Flyvie doesnt offer a power adapter to run the netbook off ships power, so you can only have the computer on for about two hours unless you supply that power adapter yourself.

The flights are recorded in a proprietary format onto an SD card. After several test flights we had yet to half fill the 8GB card. The flights are played back using a web browser even though the files are stored locally on your computer. This is the one area where we had some trouble with the Flyvie system. We only saw consistently good results using Internet Explorer under Windows, although Firefox is supported

(Windows only). Wed like to see it run as a standalone application.

Once the viewer is running, however, the system works basically as claimed. You can scroll to any point in the flight to see cockpit, cabin, forward and top-down Google Earth views, and hear the audio. You can also tag any point in the flight to quickly jump to it later. Video can be toggled to full screen for a better view. We did see occasional mis-matches between the position shown in the Google views compared to the video. Both were reflective of the flight, but not perfectly in sync.

The potential for power debriefs is clear: Ground reference maneuvers or holding patterns can be picked apart in detail, showing every cockpit action and result. Problem landings can be dissected frame-by-frame with the pilot actions, outside view, and speed and altitude. Getting CFIs and students willing to do that is another matter, but Jeppesen recently partnered with Flyvie to try and make that happen.

All this comes at a price. The Flyvie system is $1995, plus $29/month ($290/year) for access to the viewer. Given that the system doesnt move easily from aircraft to aircraft, we could see this set up working for a premium-service flight school, but not for independent instructors or schools struggling to get by.

If youve got an iPhone and dont need the in-cockpit part of the video, Flyvie Lite is an app thats free for the iPhone. It just became available for the iPhone 4 at press time, so we havent flown with it yet. A quick test showed it installed and recorded fine. Youll need an audio cable and mount ($55) to record audio and hold it looking out the cockpit. Youll also have to pay $9.80/month ($98/year) for the Lite viewer. It works like the Pro viewer, but with only one video source. You can view the flight on the phones screen for free.

Pascal Gosselin created Wi-Flight after a double-fatal training accident at his local flight school that was the result of a low-level buzz. Gosselin felt there should be a device that could sit in a training aircraft and report improper behavior. That is, Wi-Flight was designed to be a snitch.

Given that mission, Wi-Flight has no camera and isnt so much a cockpit recorder as a datalogger. It records the GPS position and velocity, as well as both ambient and intercom audio. It turns itself on when it senses power coming from the cigarette plug (or from the master switch in installed versions) and stops recording when the power shuts off. Before it powers down, however, it scans the area for any open WiFi signals and automatically uploads the data from the flight. That goes to Wi-Flights servers and gets processed.

If something questionable, like a low-altitude buzz or landing at an unknown airport, is found, an email alert is sent. The flights are then left on the server for later review and can be viewed in a browser showing the position in Google earth, much like Flyvie, including the cockpit audio but with no video. Wi-Flight also estimates engine RPM based on the cabin audio and the number of blades on the prop, and shows likely winds at each takeoff and landing based on the nearest METAR at the time.

The datalogger is $499 plus $59/month for the web subscription for one aircraft. Wi-Flight is finalizing an upgrade chip for these that would add an altimeter and basic AHRS for $199. The per-aircraft rates drop steeply as you subscribe for an entire fleet. In our tests, the datalogger performed flawlessly so long as it sat somewhere it could get a good GPS signal. We were also quite impressed with Wi-Flights customer response and enthusiasm for further developing the product. Flight schools can apply for a free trial to see how well the system works for them.