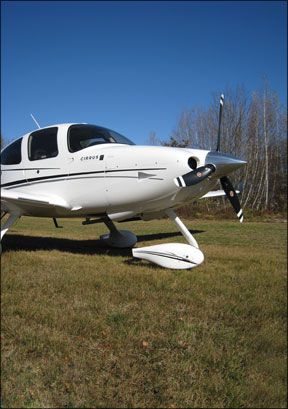 Cirrus Design and Diamond Aircraft Industries are success stories in this business because they took chances. Diamonds DA20 opened the door for composite aircraft in certified, light GA, and then Cirruss SR20 and Diamonds DA40 blew it wide open. But the first generation of both the SR20 and DA40 were just starting points.

Cirrus is now on its third generation SR20 (G3) and Diamond has been selling its refined DA40 as the DA40 XLS and CS. Both aircraft make good choices if youre looking for a new, budget, four-seat single. If you think “new” and “budget”

shouldnt rest in the same sentence, we hear you. But there are good arguments for buying new if you can, and not everyone in that category wants to drop half a million on a high-performance speed demon.

We looked at the concept of budget from three angles: mission flexibility, aircraft efficiency and options to buy just what you need, but no more. In this hard light, the latest SR20 is tough to beat.

Improvements to the Breed

Before matching the aircraft off head-to-head, its important to know how the designs have changed from their earlier forms. This is especially true if you have flown an early model and have opinions based on that experience.

When Cirrus introduced the G3 enhancements to the SR22, it was an improvement, but the SR22 already had some advantages to the SR20 just because it was a later design. Among these were a longer wing and different landing gear. When the new wing and a higher stance came to the SR20, it made a big difference.

It adds a couple knots to cruise. The control system also no longer has the rudder-aileron interconnect. This bungee caused resistance in the roll response of the Cirrus that is now gone. Its subtle, but the airplane feels better harmonized and extended pattern work wont yield a sore forearm the way it once did.

The new gear also improves SR20 landings. Cirrus sales rep Mark Bennett told us, “I used to have to fix a porpoising landing on demo rides maybe once a week. Now it hardly ever happens.”

Cirrus has steadily improved the fit and finish from the (somewhat wanting) early days of the SR20. Theyve figured out their doors and improved the trim system. Starting in 2009, the SR20 will come standard with the Garmin Perspective package, but buyers will be able to choose from a stripped-down, 10-inch-screen version up to the same suite that ships in the SR22. That means a first-rate flight deck, but scaled to your needs.

Some of Diamonds improvements to the DA40 are subtle, such as a redesigned canopy to give a bit more headroom for tall pilots. Seats and interior finish is improved. The 10-inch-screen G1000 works well in the Diamonds cockpit, where even the far side of the MFD is within easy reach of the pilot. A manually actuated cable to move the rudder pedals (the DA40 seats dont move) worked fine, but always felt like you were going to break something. The new electric system is smooth and easy.

More significant is that the DA40 now offers the PowerFlow exhaust system. This is a tuned exhaust that adds speed (or gives the same speed with a lower fuel burn). Combined with a new prop, max rpm and low-drag tires and wheel pants, this makes for a welcome boost of up to 10 knots. Our biggest beef with the DA40 in

the past was that it was just a bit too slow.

Both designs have moved with the times to include airbag seatbelts up front. Diamond also offers them in the back. Cirrus still has the airframe parachute standard, and Diamond still has one of the best safety records in all of GA. We prefer the dual-battery, dual-alternator system on most new SR20 models to the DA40s single-alternator, single-battery, emergency-battery system. But the Diamond system has yet to prove wanting in the field.

The two aircraft are almost equally good at getting a job done. The Diamond takes the edge in short- or rough-field capability. The Cirrus has a bit more useful load. Neither plane will have long legs if you have all four seats full. Book figures say the Cirrus burns slightly more fuel, but its also a touch faster.

We think the back of the SR20 is slightly more comfortable, particularly in terms of leg room, than the DA40. The back door for the DA40 is a nice touch, and when

combined with the fold-down seats and a small extended baggage area, means you can get nearly anything through the doors that will fit inside the space. The Cirrus has a more voluminous area, but you may need to do some jockeying to get big objects inside.

The DA40 comes with the GFC 700 autopilot standard, where the SR20 uses the STEC 55 in all but the GTS configuration. The GFC 700 is a smoother, more capable, better-integrated autopilot, in our view. We see the flight control center available with Perspective as a net gain in usability for single-pilot IFR, however, compared to the basic G1000 in the DA40. Cirrus also offers the infrared camera option.

Both aircraft are fine primary trainers, but, even with the improvements in the SR20 control system, we find the Diamond more fun and forgiving to fly. Visibility in the DA40 is unparalleled and the controls are well-balanced. For long trips, however, we find the Cirrus seats more comfortable. They also adjust up and down as they move forward and back. This accommodates short and tall pilots who might have trouble in the DA40.

On paper, the aircraft pencil out about the same. The DA40 book values are slightly better than the SR20 in terms of fuel burn. But our flight tests and talks with owners in the field say otherwise.

The big difference is that the six-cylinder Continental IO-360 in the Cirrus will easily run lean of peak, while the four-cylinder Lycoming IO-360 in the Diamond will not. We flew both aircraft recently on nearly identical days at a realistic altitude for cruising of 5000 feet. Trying a couple of different prop and power settings on the DA40 and leaning as aggressively as we could, we saw an average of 145 knots at 10.9 gph, or 13.3 nautical miles per gallon. The best we saw was 146 knots at 10.7 gph.

The Cirrus gave us 155 knots at 12.7 gph rich of peak. But when we ran aggressively lean of peak, we saw an average of 147 knots at 9.5 gph, which is 15.5 nmpg. The best we saw was 150 knots at 9.7 gph with no engine roughness and low CHTs. Thats a full gallon per hour less than the Diamond for the same true airspeed. Our talks with operators of both planes anecdotally confirmed these findings.

We dont have good data on maintenance costs of these two aircraft over time, but we know of no lurking issues in either design that should make a buyer of a new bird take pause.

Diamonds purchasing options are fairly simple. The DA40 XLS is the high-end DA40. Most items are standard in the base price of $334,950. Commonly added, big-ticket items would be active traffic to replace ground-based TIS traffic, for $12,950, Jeppesen ChartView digital charts for $3495 and synthetic vision (SVT) for $9995. Add in everything else, including an ADF and the sheepskin seat covers for the pilot

But thats not the whole picture. Diamond also offers the DA40 CS. This offers an la carte approach to building your DA40, with a base price of $259,950. That price doesnt include items you might take for granted, such as wheel pants. It also doesnt include the PowerFlow exhaust system. Those two items will ding performance and mean burning more fuel every mile, but you can add them for $2450 and $4995, respectively. The 50-gallon fuel tanks are also a $5750 option when building up from a CS.

Cirrus is changing its SR20 sales scheme starting in 2009. The VFR-only SRV is no longer available. In its place is a Perspective-equipped SR20 called the SR20 S, with 10-inch screens and no autopilot (but with the same keyboard control and software). Dont expect niceties like wheel pants or a second alternator here,

either, but it will be an IFR-certified aircraft. You can add features to the SR20 S or step up in a package to the SR20 GS for $332,900. This aircraft is fairly comparable to the base DA40 XLS.

Cirrus, again, takes the point for a wider range of configuration options to meet many budgets.

When we last compared these two aircraft in 2003, we liked the speed and range of the Cirrus and the handling of the Diamond. Since then, the SR20 G3 has nearly closed the gap on handling. The DA40s PowerFlow exhaust has brought the speeds a bit closer. Wed recommend flying both before you put your money down. On

balance, though, we see the new Cirrus as a better bet for a majority of pilots.

Diamonds Austro engine could change this landscape completely. Diamond projects the Austro will push the new DA50 Magnums 52-inch-wide cabin at 150 knots while burning 7 gph of Jet A. An Austro-powered DA40 could be ever faster (but climb performance would suffer versus the Lycoming).

So stay tuned, as we expect Diamond will come back somewhere down the line for a rematch.