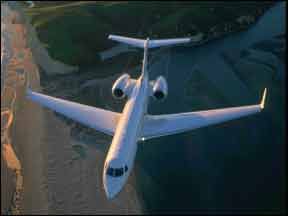 Insurance rates for most general aviation aircraft are lower than they have been in many years and some industry insiders believe that we are on the brink of a sea change. Even in this wildly cyclical business, old timers agree that this “soft” market is the deepest and longest lasting that theyve ever seen. With prices as

low as they are, this is a challenging time for underwriters. Predictions about where the market will go, how far and how quickly run the gamut.

Following the 9/11 attacks, rates for many airplanes, especially corporate airplanes, virtually doubled overnight. As a result, aircraft insurance was quite profitable for several years. This profitability did not go unnoticed and within three years, new entrants began to enter the business.

By 2006, there were seven more companies insuring aircraft than there had been in 2002. Some of the new entrants were established airline and aerospace insurers seeking a presence in general aviation in the U.S., but some were new to aviation. Recently, rumors have begun to circulate of yet two more possible start-ups. The new companies offered low premiums to get new customers and the old companies were forced to offer low premiums to hold on to their old ones. The financial collapse in 2008 came at a time when many thought that prices would begin to increase, but GA suddenly seemed fragile. Rates continued to fall.

Insurance price cycles are more the product of economic conditions than of minute changes in accident rates from year to year. Insurance market swings are not a new thing, but this one is something of an anomaly. Typical soft markets take place in times of economic prosperity when theres considerable opportunity for insurers to invest money for the time between when they collect premium and the time that they have to pay it out in claims.

Insurers will offer great premiums deals in order to put money in the bank and invest it. This allows them to suffer slight underwriting losses but still remain profitable because of the investment income. The current soft market began in a time of prosperity, but has lasted and deepened through two more years when investment opportunities have become rare.

The explanation may simply be one of supply and demand. In order to sell insurance, companies must bank cash in the form of reserves and surplus to make certain that they can meet the obligations of the policies that they have written. The capital required to back insurance policies is known as capacity. With all of the new companies that have flocked to general aviation, there is considerably more capacity available than is needed.

In addition to downward pressure on premiums, soft markets are also characterized by the easing of underwriting guidelines. Companies may offer higher limits of liability, insure types of airplanes that they didnt before, relax training requirements or add new coverages to their policies, all in order to attract new customers and hang on to existing ones.

The benefit of the current low rates has not been evenly shared across the GA community. Big-ticket, pro-flown corporate airplanes have had the largest reductions. These are also the airplanes that saw the largest increases after 9/11. According to brokers and underwriters that we spoke to, many corporate insurance premiums have dropped to one-third of what they were in 2002. Beginning in 2004, many of these airplanes were forced to purchase higher liability and war risk limits to fly in EU airspace, so the drop is even larger than it looks.

Owner-flown turbine airplanes and helicopters have seen rates decrease substantially, although not on the scale of big-iron corporates. Light airplanes were

very little affected by the big increases in 2002, but many of them have seen their prices come down significantly.

Despite the perceived reduction in flying activity during the past two years, underwriters unanimously agreed that their loss costs had remained fairly constant. Two senior officers told us that the cost of both hull and liability claims has been increasing at around 10 percent each year. Most agreed that airplanes were getting more expensive to fix and that liability settlements continued to creep up.

Finally, several underwriters singled out unprecedented reductions in aircraft values in recent years as a factor in the difficult environment they face. Since most of the physical damage losses that they pay are partial losses, they are receiving substantially lower premiums in return for only a small reduction in payouts.

There have been rumblings about rates going up for over a year, first in the airline market and increasingly in general aviation. Insurance companies purchase insurance on their own claims, much of it to protect them from unpredictable catastrophic losses. Reinsurers have threatened to charge primary aviation insurers higher rates for this coverage for several years now and a number of carriers told us that their rates had increased substantially at their last renewal.

Curiously, insurers and reinsurers seem to take turns accusing each other of failing to maintain rates at levels adequate to pay claims and provide a reasonable profit. The old line insurers blame reinsurers for making inexpensive reinsurance available to the newer companies, who then make use of the reinsurance to issue policies at below market rates, which the old line companies are forced to match to keep their customers.

Frequently a catastrophic event will be the catalyst that starts an insurance market hardening. If big enough, one of these events can change the entire industry outlook from marginally profitable to completely unprofitable. On February 6, 2010, Dulles Jet Center suffered the collapse of three of its four hangars and considerable damage to the fourth under the weight of almost two feet of snow. The collapse damaged or destroyed a number of large airplanes, and may be the largest single property damage occurrence in the history of general aviation.

Estimates of its ultimate size vary, but most people seem to think it will be over $200 million before the last lawsuit is settled. Worldwide general aviation premium is loosely reckoned between $1.5 and $2 billion, so this one claim will eat up more than 10 percent of the total. (See sidebar above.)

This event and years of lackluster results are spurring reinsurers to increase the rates which they charge primary insurers. Several company representatives told us they would have to pass their higher reinsurance costs on to their customers. Reinsurance programs vary widely from one aviation insurer to the next, but most catastrophic protection starts well above levels used to insure light airplanes. We dont see much radical change taking place unless the amount of available capacity is reduced. Faced with bad enough results, insurers could withdraw and put their capital to work elsewhere, as Travelers did two years ago. But we dont see any of the companies in the business now who seem likely to abandon it any time soon. This, taken together with persistent rumors of at least one more new entrant, we dont see much chance of capacity being reduced in the near future. We believe that rates for most owner-flown airplanes are historically low and that they will start to increase at some point, but we dont think it will take place in the next year. We also think that when it starts, it will be gradual.

Whether or not the Dulles Jet Center collapse will spark the next hard aviation insurance market remains to be seen. We think it will, but we dont see the kind of rapid hardening that has sometimes happened in the past.

From what insurers are saying, it seems likely to us that rates for corporate airplanes and other sectors will begin to rise in the near future, but at a modest pace. The increases that reinsurers are seeking do not seem to us as if they will have an immediate effect upon light airplanes or even on light jets, whose relatively modest hull values and limits of liability put most of them below the levels of most excess of loss reinsurance programs.