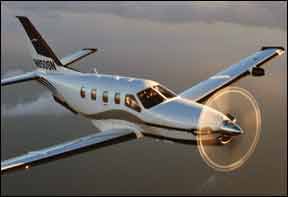 With the 100 percent bonus depreciation rule in effect, 2011 was a good year to buy a new aircraft for business use. But to claim the benefits of the bonus, you need to get your filing details in order and not overlook the record keeping necessary to justify the bonus claim. Further, to avoid getting afoul of the IRS, it’s critical to understand what business use really is.

As for 2012, the bonus will be 50 percent, but if combined with allowable expensing elections, you can still claim a sizable chunk of depreciation to reduce your tax burden and make the cost of a new airplane for business use more appealing than it otherwise might be.

2011 CONSIDERATIONS
Although 2011 is behind us, filing a return may not be, so Horton offered some pre-filing tips. As part of a larger stimulus package, Congress approved 100 percent bonus depreciation for any new aircraft or new upgrade placed in service in 2011. The bonus means that you can apply the full purchase price of the airplane as a deduction in a single year, rather than using the more conventional five-year accelerated depreciation schedule or six-year straight-line method.

“You don’t have to take the bonus,” Horton told us, and for some taxpayers, conventional depreciation might be more advantageous. However, if the full bonus is applied, it can be used to show a loss, which may allow the taxpayer to amend prior year returns and get money back.

And the documentation is important, a detail some filers forget. You can organize it after the fact, but you’ll need to keep good records. “On audits, you must show evidence of the purchase price to show the basis you used for the depreciation,” Horton explained. “You need to maintain flight logs, showing the date of the flights, the flight time and route of travel, the purpose of the trip, the number of passengers on board the aircraft and their purpose for making the trip.”

In addition to flight logs, contracts, purchase orders, proposals and the like are good supporting documents that will make an audit less stressful if one actually occurs. Plan to provide these documents for your accountant, if needed. “These are things on audits that will absolutely be asked for up front,” Horton says.

In addition to the bonus option, aircraft owners can also reduce tax liability by taking what’s called the Section 179 Expensing Election. This applies to both new and used aircraft and related equipment. For 2011, says Horton, you can deduct up to $500,000 for an aircraft-related purchase, provided that the total capital assets placed in service don’t exceed $2.5 million. For 2012, the expensing election is reduced to $139,000, phased out at $700,000 in capital asset additions.

“But a key difference here is that you can’t use the 179 election to create a loss. You can only use it to absorb income. But unlike the bonus, it’s not all or nothing. You can elect any amount between zero and $500,000,” Horton said.

LOOKING FORWARD
The coming year will be a 50 percent bonus period and although that’s not quite as attractive as the 2011 tax code, it is, nonetheless a strong incentive to buy a new airplane—if you can justify it—or upgrade an airframe you already own with new avionics or other improvements. Moreover, the 50 percent bonus can be combined with the Section 179 election to reduce tax exposure. The law requires that Section 179 expenses are applied before the bonus.

“So the example is that if you installed, say a new G600, for $30,000, off the top under 179, you could take the entire amount. You wouldn’t even need to use the bonus because the 179 election would absorb the entire amount,” Horton says. (As a rule, the bonus applies only to new property, while Section 179 elections can apply to both new and used.)

There are various ways to structure the ownership of a new airplane, but Horton told us he favors what he calls the parent-subsidiary structure, as long as the owner’s facts support it. That means that the entity that owns and operates the airplane is a wholly owned subsidiary of the operating company that uses it for business.

“That way, the cost of the aircraft flows into the business as an expense and reduces the taxable income,” says Horton. Some problematic tax issues such as the passive loss rule, hobby loss and related party leasing are less of an issue with this structure. In addition, the IRS is used to seeing such arrangements and they don’t raise as many red flags as a stand-alone entity that reports a large loss.

“Also, from a sales and use tax standpoint, it’s very good to have a leasing structure where the aircraft is dry leased from the owner entity to the operating business. That way, you can usually significantly mitigate sales tax,” Horton adds.

State Taxes
Which leads us to the issue of local taxes, mainly state sales and use taxes. Horton says many owners have been bitten by large tax bills they didn’t expect because of a poor grasp of state sales tax laws.

“I heard this literally five times at Sebring. People were telling me they don’t worry about sales tax because they have the airplane registered in a Delaware LLC and Delaware doesn’t levy sales taxes,” Horton said.

True enough. But what matters is where the airplane is based and used. In these cases, the state may come sniffing for revenue, to the extent of sending tax collectors to airports to record N-numbers.

“In California, for instance, the sales tax on a new Cirrus would be nearly 10 percent or $60,000,” Horton says. The better way, says Horton, may be to take delivery of the airplane in a state that has a fly-away sales tax exemption, so that the state doesn’t charge sales tax for an airplane bought there but used elsewhere. And where possible, it’s smarter to elect to pay taxes on aircraft rental income through the dry lease subsidiary than a $60,000 tax bill up front.

Although an aircraft buyer might purchase an airplane for business use and meet the test of 50 percent qualified business use in order to take accelerated depreciation, that doesn’t mean the  buyer can’t  use the aircraft for some personal use. But an owner needs to be careful here.

Generally, the percentage of flight time attributed to personal use will result in a proportional disallowance of aircraft expenses. In other words, if you use the aircraft 20 percent of the time for fun, you will lose 20 percent of your aircraft-related deductions, including depreciation. In a year where an owner takes a large depreciation deduction, that can be a huge hit.

An owner might be well advised to carefully document some personal use as legally allowed fringe benefit flying, a solution that may work for some businesses when the nature of the flight is not recreation, such as going to a medical appointment or checking on a personal investment. In this case, the IRS allows the business to deduct the aircraft expenses for those flights as long as the owner recognizes some income based on a standard cost-per-mile formula.

Aircraft expenses are usually much more than the owner’s fringe benefit income tax hit and, when utilized properly, making the claim keeps everything above board with the IRS.