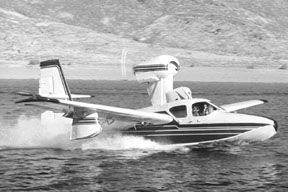 As if owning an airplane doesnt entail enough surprises, hundreds of Lake Amphibian owners have received not-so-friendly letters from a patent enforcement company demanding money for an AD-required part that happens to be protected by a patent.

The AD requires a kit of parts to re-enforce the wing spar and was developed by Lake to fix a defect in the airplane. But as is often the case, a competing company developed a cheaper fix and Lake owners naturally availed themselves of a way to save a few bucks.

Now comes a company that Lake sold the patent to, demanding money for patent fees. So the question Lake owners face is do they pony up the dough or tell the patent company to pound sand? Unfortuately, theres no pat answer.

Background
When the FAA first approached Lake Aircraft regarding the spar fix, the FAA threatened to ground the entire fleet. Through negotiation, Lake convinced the FAA to issue an AD, allowing them to develop a fix. Lake invested thousands into engineering the parts and was required by the FAA to pre-purchase enough parts for the entire fleet of nearly 1000 aircraft. To protect this substantial investment, Lake applied for a patent on the part.

When a patent is issued, it gives the owner the right to exclude others from using the technology. Thus, a patent owner may exclude a competing manufacturer from making infringing parts. Also, a patent owner may exclude users-here, owners of Lake Amphibians-from employing the part. However, none of these rights exist until the patent is granted and issued, which usually takes about two years. Further, the Patent Office may only grant a patent if the technology is new.

During the period of AD compliance, Airtech Canada saw an opportunity and offered the same part for almost half the cost. Aware of this competition, Lake sent several letters to Lake Amphibian owners, asking them not to buy the knock-off part and warning that the part could potentially infringe its pending patent. However, until the patent was granted and issued, Lake could do nothing.

In December 2001, the patent was issued, and Lake had a legal leg to stand on. By this time, however, many Lake owners had installed the part pursuant to the AD and Lake could no longer take action against the Canadian parts manufacturer. So, with a supply of 700 FAA-mandated parts, Lake sought an option to recoup its costs.

One option would be to sue its customers, something almost unheard of in patent law circles. Not surprisingly, Lake decided against this option and sold its patent to a patent enforcement boutique, EnPat of Melbourne, Florida.

EnPat is a company that buys patents-or rights to patents-and then sues infringers. Its not a pleasant business but it does provide options to companies that want to obtain value from patents without suing anyone. After the sale of the patent, EnPat then sent warning letters to the accused infringers, that being any Lake Amphibian owner who had purchased the Canadian part.

Bad PR
Since EnPats actions, howls of protest have arisen in the aviation community and Lakes name has suddenly become mud. We can hardly imagine a worse PR blunder.

Given the facts, though, Lakes decision made business sense. In fact, the companys decision to seek a patent on an AD-required part was ingenious. We are unaware of any aviation company that has ever had the foresight-or gall, depending on your view-to obtain a patent to an AD-required part.

Were not unsympathetic to Lakes plight but neither should Lake owners take it in the shorts. The real issue is the FAAs requiring Lake to purchase the expensive parts upfront. It invested thousands in accumulating a parts inventory, just to have another manufacturer allegedly reverse engineer the part and undercut its sales.

So, the question remains: do you pay? No option is entirely attractive, in our view. You can pay EnPat and be done with it. Or, you can refuse to pay and await a potential subpoena and lawsuit. However, option two is like waiting for an IRS audit letter.

Unlike an audit, though, under either option, you may have the right to seek remuneration for your payments from Airtech Canada since, in effect, they sold a part that EnPat now claims infringes on their patent.

Clearly, the second option is risky, especially in view of the potential higher damages and attorneys fees. But to obtain these damages and fees, EnPat would have to take legal action against you in your home U.S. jurisdiction.

Interestingly, if you live outside the U.S., you get off scot-free-at least for now. Foreign patents are still pending.

Also, if you live in Alaska or Hawaii, you can probably rest easy. But, EnPat tells us that a majority of the accused infringers are located in Florida, which makes a lawsuit there easy. So, if you live in Florida, the safest-although hardly the most satisfying-way out is to pay the licensing fee. In the end, it may be less costly than defending a lawsuit.

Lionel Lavenue is a patent attorney and Skylane owner in Washington, D.C. He works at the largest patent firm in the U. S.