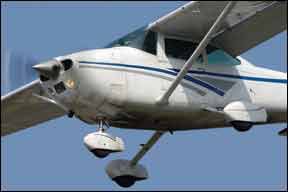 While the FAA and the oil industry plod along toward an eventual replacement for 100LL, one alternative persists like a large elephant squatting uncomfortably on the conference room table: mogas. We know more owners, desperate for at least some kind of clarity, are seriously considering it as an option. Moreover, the list of airplanes that can burn mogas is longer than you might imagine and likely to grow.

Last year, Lycoming quietly announced that it had approved its 180-HP parallel-valve O-360 series for use with a specific grade of mogas. Does this mean the company is bullish on mogas as an alternative to a 100-octane equivalent? Not really. The company is just responding to market realities. In other parts of the world-Europe and Asia, mainly-mogas is becoming a fuel of choice because avgas and the infrastructure to dispense it isnt available. And if it is, the cost Delta between avgas and mogas is greater than it is in the U.S.

We know more owners are looking at mogas as an alternative because were hearing from them. The list of engines and airframes approved for mogas is long and likely to grow modestly. Even some relatively high-performance aircraft such as some Bonanza models and Cessna 182s are approved for automotive fuel. Yet supply and distribution remain a problem. According to AirNavs monthly surveys, about 109 airports have mogas available, although the number is probably somewhat higher. That represents only 3 percent marketshare, a number too tiny to represent much volume.

But its also inching upward as FBOs take a second look at putting in the tankage necessary to dispense mogas. U-Fuel, a Wisconsin-based manufacturer of self-dispensing fuel systems, is marketing modular pump products under the SportFuel brand. Its also helping buyers of these systems find high-octane, ethanol-free premium gasoline, which some FBOs who already have mogas pumps worry about finding reliably.

According to the U.S. Energy Information Administration, about 12 percent of U.S.-refined gasoline is non-reformulated fuel and/or not blended with ethanol. Given that large volume, its not clear why non-ethanol fuel isnt more easily available at distribution terminals, but our checks with FBOs who carry mogas reveal an undercurrent of concern about supply.

U-Fuel helps its customers find sources of supply, but it doesnt intervene as a third

party to assure a broad-based supply chain. But one new company is doing just that in California. Clear Gas LLC formed in May and plans to deliver unleaded, ethanol-free fuel to the recreational, marine and aviation markets.

It will essentially act as a third-party clearing house by combining small individual orders from various sources into larger volume buys from terminals that have the fuel available. This addresses the long waiting times some FBOs have experienced in obtaining mogas supplies. Clear Gas says the effort is more about staged delivery and low volume sales and not necessarily high-volume lower pricing. (See www.cleargas.co for more.)

Both the EAA and Petersen Aviation (www.eaa.org and www.autofuelstc.com) did extensive work on mogas approvals during the 1980s and although those STCs are still available, the perceived lack of ethanol-free fuel has put demand into dormancy. But for anyone interested, the STCs-or airplanes that already have them-are there for the buying.

Petersens STCs, for example, are priced at a reasonable $1.50 to $2 per horsepower, depending on octane requirements. A few models, such as the PA-28-160, 161 Warriors and the Archers are, at $2750, more expensive. Petersens list of approved airframes is extensive, including such popular models as most of the Cessna 100 series, Beech models including some of the 35 line, Maules, dozens of Piper singles, the Grumman Tiger and a host of low-powered taildraggers. Neither Peterson nor EAA has done much recently with new approvals, but if avgas supply worries force the issue, its not inconceivable that demand could return.

Against this slight stir in the market comes Lycomings surprise approval of its 360 series for mogas. We say “surprise” because the engine and airframe companies have traditionally taken a dim view of mogas for several reasons. Ethanol became the main villain 20 years ago, but there are also concerns about octane requirements, vapor pressure standards, quality assurance in the distribution chain and fuel aging.

Unlike avgas, which has a long-term aging requirement, mogas can degrade relatively quickly, forming gum and varnishes that can clog fuel filters and carburetor jets. The warmer the weather, the faster the degradation. While this might not be a problem for the distribution tanks, which are refreshed with new supplies, it can be for an airplane stored for a year with mogas in the tanks. (Veteran mogas users tells us they fill their tanks with avgas or an avgas/mogas blend if long-term storage is planned.)

In approving the 360 line, has Lycoming relented on these concerns? Not exactly, it turns out. It still thinks avgas is the better choice but accepts that mogas is a reasonable substitute.

“The reason we did these approvals was mainly for international markets,” says Lycoming general manager Michael Kraft. “To be blunt about it, the availability of avgas in the U.S. and Canada is quite good, but when you move to Asia-Pacific and the Middle East and other areas, they dont have the avgas distribution. To give you an example, the Nigerian Air Force flies Lycoming piston-engine aircraft and theyve run mogas for years. What were doing here is putting bounds on the mogas you should be using rather than pump gas, where you dont know all the parameters.”

And what is that gas? Lycoming specifies this in its most recent version of Service Instruction 1070Q. That bulletin calls for an ASTM 4814-09b automotive fuel with a minimum 93 AKI octane, less than 1 percent ethanol and tightly constrained vapor pressure.

The bulletin says automotive fuels typically have RVPs between 7 and 9.3 PSI in summer, but these vary by region and in some geographic areas, theres no upward limit at all.

Kraft says this raises the risk of fuel starvation due to vapor lock, especially where fuel lines enter the warm firewall area. Although real-world vapor lock with mogas doesnt seem to be a widespread problem, its hardly unheard of. Our survey of mogas users earlier this year revealed that at least two had suffered inflight engine stoppages which they attributed to vapor lock. Cars are more tolerant of vapor pressure swings because the fuel systems are pressurized from the tank forward and some systems have fuel return lines that tend to cool the gasoline. Moreover, except in mountainous areas, cars dont routinely climb to high altitudes, where lower pressure encourages the boiling that causes vapor lock.

How much of the current mogas delivered to U.S. airports meets this spec is unclear. Finding out about octane values before the fact isnt easy, without calling the airport and perhaps not even then. The Web directory www.pure-gas.org list sources of E0 premium and also provides octane. But not all airports are listed.

Pricewise, Airnav shows about a $1.32 price Delta between mogas and avgas, on average. But at some airports, the price difference is much less and a few even charge more for mogas than for avgas. We think this has to do with local flowage fees and airport overhead, because we doubt if FBOs can make a profit center out of mogas sales.

Although Lycomings approvals last year dont represent a wholesale swing to mogas, they do indicate the company wants some downside protection against avgas availability issues. “Our motivation on this is that generally we want to have the engines approved for the widest range of fuels possible. It gives flexibility in the distribution chain. We want to be accurate about what the fuel requirements are with regard to octane and vapor pressure and allowable oxygenates,” says Lycomings Kraft.

As with all of the mogas approvals, both the airframe and engine require a TC or STC. Lycomings approvals are for the engines only. We asked if any OEMs are considering factory airframe approvals and Kraft says he believes some will, for the same reasons that Lycoming has: In the current market, the more fuel options, the better.

Continental has taken a different tack.Although its adding to approvals for high-horsepower engines that can burn unleaded aviation fuels of less than 100 octane, mogas isnt on the table, at least in public. Its focusing instead on developing an aircraft diesel to burn Jet A.

Does it make sense to consider a mogas STC or buy an airplane that can be approved? We think that depends on the type and amount of flying you do and how

nervous you are about future avgas supplies.

If you fly 150 hours a year-thats a lot these days-in something that burns 10 to 12 gallons an hour, burning mogas could save you as much as $2000 a year. That could easily pay for an annual. Owners weve heard from arent much interested in the bucket-and-can brigade, so you can either invest in a portable dispensing system of your own or rely on airport tankage. If theres an airport pump within reasonable range, the numbers can work, even if its not a slam dunk. Theres just enough mogas available to make long trips possible, bridged by avgas fillups.

On the other hand, for a 50-hour-a-year pilot flying something that doesnt burn much fuel, the savings may not be worth the effort of finding mogas, unless its easily available on the home field or close by.

The good news may be that mogas availability seems to be modestly on the rise. Its possible that as more light sport aircraft appear and owners tire of waiting for a 100LL solution, the mogas market will reach critical mass. Even tripling the current availability might attract more buyers and make mogas fueling less of a hunt-and-peck affair.

Although the price difference between mogas and avgas is not consistently large, it could become that way if the cost of the 100LL replacement is significantly higher than the current leaded-fuel standard.