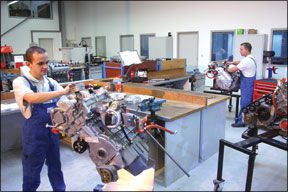 We sometimes think the entire edifice of new aircraft engine development is like a beachfront house built a little close to the surf. The view is great for awhile, then the tide rises and foundation crumbles. That analogy works for Thielert AG, whose stunning initial success with aerodiesel engines has devolved into insolvency and an

investigation into potentially fraudulent financial reporting on the companys fiscal health. The owners of some 600 diesel-powered Diamond aircraft are less worried about the financial niceties than they are this overarching question: Is the engine itself technically and economically viable or is it just too maintenance hungry to survive in the market? And if so, is that what dragged Thielert into this mess?

Based on our interviews with owners, sales people and Diamond officials, our conclusion is that this may be unknowable at the moment. As we go to press this month, Diamonds senior management is huddling in Europe with Thielerts new management and insolvency overseers to bring clarity to this situation. It may be weeks before we learn anything useful, if we ever do.

Meanwhile, to its credit, Diamond is aggressively stepping up and has established a hotline for owners seeking support for Thielert aerodiesels and has placed significant parts orders with the insolvent company. We see that as good on two counts: It means that Diamond intends to support these engines even if it has to do so on its own and the parts orders will give Theilert needed cashflow.

Theilert is a public company, having completed its IPO in late 2005, so its financials should be relatively transparent. Unfortunately, the board of directors in late April declared that Thielerts financial statements for 2003, 2004 and 2005 are “probably incorrect and possibly void.” The data in these statements served as the basis for the IPO in 2005 and German authorities are looking into the potential of criminal fraud.

At issue, among other things, is the use of “ghost invoices” or imaginary orders to pump up the companys financials to obtain bank credit and sweeten the potential stock value. According to

Defense Industry Daily, which reported extensively on the story, Thielert carried on its books unpaid invoices for a number of companies, including General Atomics, which uses a variant of the Thielert Centurion engine in the U.S. Armys MQ-1C SkyWarrior UAV.

Investigators found large discrepancies between invoices on file and actual cash received, according to DID. When the investigation rose to the level of a criminal complaint in early 2007, investigators obtained a search warrant for Frank Thielerts residence and the business itself.

We wondered if any of the companies dealing with Thielert were aware of these developments, especially the U.S. defense contractors. General Stephen Mundt, who heads the U.S. Armys aviation branch, said he was unaware that the CEO of a major supplier was under investigation until asked about it by a reporter, according to DID. Cessna told us it did know about the investigation before it announced the Cessna 172 TD last fall. Cessna has since delayed deliveries of the TD Skyhawk.

Meanwhile, owners of some 450 DA42 Twin Stars and another couple of hundred DA40 singles hold their collective breath to see what happens next. Diamond has clearly expressed its intent to support these engines and, in our view, has thus far done a satisfactory job of communicating with owners on the one hand, while staring at the opaque reality of Thielerts meltdown on the other. As press time, no one seemed to know enough detail about Thielerts inner workings to offer useful insight.

Late last fall, we polled owners on their experiences with the Thielert diesels and

were surprised to learn of numerous problems and complaints, most related to what these owners characterized as poor aftermarket support from the company, but also design and technical flaws.

We concluded that these owners thought maintenance costs on the engine were much higher than they expected, but the critical question is whether these costs can be tamped down with evolving experience, or if the engine is simply not viable at its current cost structure and technical design. We revisited some of the owners we polled last fall to find out if things have improved.

“Yes, it [service] was actually getting better,” says Stan Fetter, who operates a couple of Thielert-converted Cessna 172s in the Washington, D.C. area for traffic spotting work. Fetter may be the highest usage diesel operator in the U.S., racking up a couple of hundred hours a month. Like other operators of the launch product-the 1.7 Centurion-he experienced numerous problems with those engines, ranging from cooling issues and oil leaks, to FADEC faults and difficulty getting technical support. Earlier this year, Fetter converted his airplanes to the follow-on improved product, the Centurion 2.0.

“The 2.0 is everything the 1.7 should have been, but wasnt,” Fetter told us in an interview in early May. “This is genuinely a better engine. Its got new mapping for the FADEC, new software and the cooling is much more uniform, so theres no variation in operating temperatures,” he told us. Overheating resulting in significant engine damage has been a common complaint among owners. This evidently caused valve seat damage that required a number of engine replacements. (As we go to press, we received a call from another owner complaining about this issue.)

Fetter told us service and response from the factory has also improved, although hes worried that this wont be sustained through the bankruptcy proceedings. Fetter, as do all of the owners we contacted, continues to believe the Thielert line is economically sustainable, including one owner who had terrible service history with his converted 172s.

John Grief, who operates Tropic Aero in Belize, converted a 172 to a 1.7, then followed that with a 2.0 when the inflight failure of the first engine put the Skyhawk on a beach with airframe damage.

To describe his experience with the Centurion 2.0 as mixed is to be generous. “We had clutch problems with it. Three failures in 100 hours,” he told us. “The third one was literally in pieces on the ramp,” Grief said. He has since sold the diesel Skyhawk and is done with Jet A piston engines-but only for the moment. He said he would try again when it appears the industry has sorted out the teething pains. “I just dont want to be first again. But I think the technology will succeed,” he added.

One of the most experienced maintainers of Thielert engines in the U.S. is Mario Markides at Utah Valley State College in Orem. UVSC bought the first Twin Star in the U.S. for its pilot training program and has upgraded its fleet to 2.0 Centurions.

Markides told us that the dispatch rate for the twins has improved markedly. “With the 1.7 engines, the airplanes were down more than they were online. Now its the opposite,” he told us. When we asked if he judged the engines to be economically viable, Markides said yes, but with one caveat. Thielert has to get the required inspections and replacements for major components such as gearboxes and clutches under control. Operators are still inspecting or replacing gearboxes at 300-hour intervals which, in a busy flight school, comes every couple of months. As of press time, that interval was raised to 600 hours. Markides says that long term, thats an improvement, but its unknown if its an acceptable maintenance load. Like Fetter and Grief, Markides thinks the engine will succeed, but not if the intensity of inspections and required parts replacement isnt addressed.

Stan Fetter told us he was contacted by the bankruptcy firm overseeing Thielerts insolvency and assured the engine business could be salvaged. Were somewhat skeptical of this claim being made so quickly ahead of Diamond-Thielerts biggest customer-knowing more about the cost structure and economics of Thielerts warranty support. The 2.0 engines havent been fielded long enough to see how reliable they will be.

This relates directly to Markides observation about the need to produce engines that dont require such a heavy inspection and routine parts replacement load. If Thielert-or someone else-cant do that, the cost of aerodiesels may need to be significantly higher to cover these costs, making them ultimately less competitive with gasoline engines.

As we reported in the April 2008 issue of

Aviation Consumer, Thielerts engines cost more than twice as much a competitive Lycoming engine, but the diesels superior fuel specifics make its lifecycle cost slightly lower. But this could be wiped out by continuing repetitive inspection requirements and parts replacement. In areas of the world where avgas isnt available, that might not matter-to a point. If Jet A is the only fuel in town, operators may pay anything to fly with it. But in the U.S, it could be a deal killer.