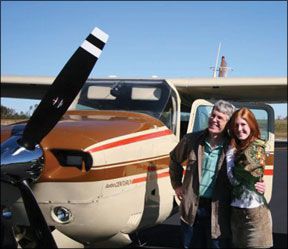 eres anything good about disputes between owners and aircraft maintenance shops, its that they dont happen very often. Unfortunately, if a big upgrade job does go sour, there may be no ready recourse for owners. Legal action is expensive and likely to be unsatisfying and in the end, its better to avoid the dispute in the first place. In other words, pick the right shop at the outset and you wont need to hone your commercial combat skills.Thats the assessment we draw from the experience of two owners who recently contacted us concerning aircraft upgrade

projects that took vastly longer than the shop promised and left one owner out a couple of thousand dollars in missing materials and another fuming over both the delay and poor quality.

What went wrong here? In our view, poor communication and over-promising by the shop and business practices and policies we consider not particularly customer centric. For their part, the owners may not have been savvy enough-make that skeptical-in dealing with a shop whose reputation was unknown and who promised what we view as unrealistic delivery dates. Further, we have found that scheduling both a paint job and interior work at the same shop and at the same time is rarely a good idea. We always advise against it.

The shop in question is Tri-D Aircraft Interiors and Paint in Watumpka, Alabama, near Montgomery. For Karen Edwards and Jim Pearce, the dispute with Tri-D developed during the summer of 2007. The two bought a 1978 Turbo Cessna 210 in the fall of 2006 which proved to be in good shape, but with a paint color and interior scheme that Karen Edwards told us was “hideous.”

With money in the budget for upgrades, the couple decided to paint the airplane and reupholster at the same time. After searching for shops to do the work, they settled on Tri-D, based on notices posted on the Cessna Pilots Association Web site. Edwards and Pearce found some negative comments about Tri-D related to slipped delivery times, but also found comments that these problems were addressed and “all was well now.”

In late 2006, the couple flew to the shop to pick out colors and fabrics and were concerned to see some 20 aircraft in various stages of disassembly around the shops hangars. But Pearce said Tri-D owner Richard Chaput assured them of his ability to move jobs through his shop quickly. The couple agreed to a price of $18,000, including paint, interior and new glass and wrote Tri-D a check for the full amount ahead of work starting. The airplane was brought to Tri-D on February 10, 2007 and the job was supposed to begin immediately.

On their Web site (http://sss-mag.com/fernhill/airplane.html), the couple detail a litany of delays and what they describe as excuses from the shop. Some work began in March, but by April, the 210 still hadnt had its old paint stripped, something that didnt happen until May. When Pearce drove to the shop from his home in Tennessee on June 9, the airplane was stripped, but the interior wasnt complete and Chaput had stopped reliably returning calls, Pearce said.

By late June, the couple was assured by Tri-D that the base coat had been applied and the interior was installed. But when Pearce had a friend stop by the airport, the airplane was parked outside unpainted and with a gutted interior.

Although Chaput had assured Edwards and Pearce that the glass had been installed and the paint would be completed soon, by July 21, it still hadnt been and the Centurion languished stripped and unprotected on the ramp. By early August, the airplane finally got its first base coat. On August 20, Chaput called the couple to say the airplane would be done in three to five days and an August 31 pickup was planned.

But that date came and went, with more delays related to paint details and the lack of interior installation. At one point, Edwards and Pearce approached the local avionics shop on the field-CMA Aviation, operated by Jules Moffett-with a proposal to have them complete the job. This may have stirred Tri-D into motion, but despite repeated promises, the shop still didnt put the airplane back together suitable for delivery until mid-October, fully eight months after it arrived for the job.

When the couple picked up the airplane, they were satisfied with the quality of the work, but there was a serious problem: The new glass they had paid for was never installed and was in fact installed in another airplane, according to Edwards. Chaput conceded this and promised to pay the couple back. As of December 2007, they hadnt been paid anything.

Another Tri-D customer, Dan Burwell, told us a similar tale. He delivered his 1964 Cessna 320 Skyknight from the Seattle area to Tri-D in February 2005, having also read about the shop in CPA publications. Like Edwards and Pearce, he specified new exterior paint, interior and glass and even supplied the materials and $7500 upfront, which is what Chaput said he wanted for “earnest money.” Burwell also had some avionics work done.

The total job was quoted at about $30,000, according to Burwell, who was then an active duty Army officer serving in Iraq and Afghanistan. Burwell told us he suffered similar long delays and because he was overseas and unable to hector Tri-D to keep the job going, his work took about nine months to complete.

When Burwell got his airplane back, he wasnt happy with the quality. “The paint cracked around the nose cone and had to be repaired. Under the nacelles, it peeled off because it was prepped incorrectly,” Burwell told us. Further, he said there were no logbook entries for the work and the airplanes controls were misrigged.

We contacted Tri-Ds Richard Chaput for a response and he conceded that the Edwards/Pearce 210 job had been poorly handled. “Im not proud of it,” he said, “I did the best I could to fix it.” Chaput told us his wife had suffered health problems and the two were in the process of selling the shop, during which time it was operated by the would-be buyer. However, that deal collapsed and Chaput has now taken the shop back and is operating it himself.

He further confirmed that he owed Edwards and Pearce for the new glass which was purchased but not installed. Karen Edwards told us the couple had agreed to

accept $200 a month restitution, with no interest. As of mid-December, they had received no payments from Tri-D or Chaput.

Although he accepted blame for the 210, Chaput disputed Dan Burwells account of the Cessna Skyknight job, countering that the airplane needed more work than he expected and that a portion of the time it spent at Tri-D was given over to avionics work, not paint and interior. Further, said Chaput, Burwell didnt provide enough material to cover all the seats, which also delayed the job. He disputes Burwells claim that the work wasnt logged and contends it was at Tri-D for five months, not nine. In his defense, Chaput told us Tri-D has completed 700 airplanes with many loyal customers, one of whom is the Civil Air Patrols National HQ in nearby Montgomery. We checked with CAPs Nelson Daniels who confirmed that Tri-D has done “a bunch” of refurbs for CAP. The verdict? Satisfactory quality and good prices, but missed delivery promises. “We told him hell have to do better next time,” Daniels told us.

We also interviewed Jules Moffett, the avionics shop owner who intervened for Edwards and Pearce. He reported that many owners complain about late work from Tri-D and when Moffett had his own Baron painted by the shop, it took more than 3 months. He was pleased with the quality, however. “And Im pretty hard to please,” Moffett said.

Whats to be made of all this? Shop disputes often devolve into he-says-she-says mud slinging, but in this case, we think Tri-D has shown an unacceptable pattern of late deliveries that would try the patience of many owners.

Beyond that, the larger issue is vetting shops before engaging them for big ticket jobs like paint and interiors and how best to get these major jobs done on time. We have repeatedly advised owners not to have paint and interior work done at the same shop and the same time.

Many of the complaints we hear about shops relate to schedules spun out of control because shops just arent able to coordinate the two jobs or they overpromise delivery dates. Indeed, Chaput told us he still tells customers that paint and upholstery can be done in four to five weeks, a promise we think is profoundly unrealistic.

Although some shops can manage to get such large jobs done eventually, we still stand by this advice: Schedule the jobs separately and if practical, have them done by different shops whose reputations are known quantities. This can only be determined by direct, recent reference from owners you know or multiple references with no pattern of complaints.

Second, we continue to take a dim view of flying the airplane halfway across the continent to have major work done. There are good shops in every corner of the country and its not too difficult to find them, although obtaining reliable references will take work. Its one thing to deal with an Air Mod, a Zephyr Engine, a Penn Yan Aero or a Dial Eastern States by remote control, but quite another to trust a shop youve never heard of or whose references include some warning flags.

Karen Edwards told us something weve heard before: Legal action in a situation such as those described here is likely to be costly, aggravating and ultimately fruitless. Since neither she nor Dan Burwell had a written contract with an agreed upon delivery date, proving harm is problematical. Better shops insist on written contracts and proposals and owners should, too,

Next, upfront money. We think its a terrible idea to pay the entire cost of a job upfront, and Karen Edwards told us she now agrees. Some shops ask for a good-faith deposit, but many do not. If upfront money is part of the deal, the terms should be clearly described in a written document so theres recourse if things go south.

Last, realistic expectations. A high-quality paint job promised in a month is not realistic, in our view. Six weeks to two months is more reasonable. We would put similar numbers on a full interior redo worthy of the name. You should expect such work to take six weeks, but not six months.