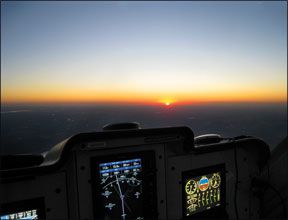 Fuel prices may be in a momentary decline, but the handwriting is clear: The cost of owning even a fixed-gear, four-place single is slipping away from more and more pilots. Light sport aircraft (LSAs) are heralded as a possible solution, but what happens when you need to go several hundred miles? Are these “hobby planes” up to the task?

The question isnt whether you can travel in an LSA-people have taken ultralights around the world, so, of course, you can. The question is whether they have reached a level of utility close enough to a four-seat single that the tradeoffs are minimal and the gains are worth it.

In our view, this analysis comes down to four things: comfort, efficiency (for both fuel and time), payload and adverse-weather capacity. We asked owners and operators for their thoughts and then put our findings to the test. One January afternoon, we borrowed a new Remos GX from Tommy Lee of Adventure Flight in Springdale, Arkansas, and took off for a meeting in Houston, Texas, just shy of 400 miles away.

If all you need to pack is an overnight kit and your flight bag, any LSA will do. To

carry more than this however, youll want to look at where it can go. Some designs, such as Jabiru and Flight Design, have massive baggage areas and capacities. Others have little more than a hat shelf. On that note, be careful what you store behind your head as it becomes a projectile in a crash.

The Remos had a baggage area accessed by removing the pilots seat. Many LSAs have baggage areas that are hard to, or impossible to, access in flight. This is a change if youre used to tossing a bag on the back seat and grabbing it when needed.

Because all LSAs are limited to 1320 pounds on wheels, weight gets to be an issue with two people on board. At best, youve got about 625 pounds to play with for useful load. With only one person, however, the LSA can haul some serious gear.

The importance of fuel planning for LSA travel caught us off guard. The Rotax-powered Remos GX carries 21 gallons of useable fuel, toward the higher end for an LSA. The forecast for our Springdale-to-Houston leg was for about 10 knots on the tail. We planned a non-stop flight at 5000 feet that would burn about 14 gallons of gas, take three hours and leave over an hour reserve for the nighttime arrival in Houston.

As things would have it, the promised tailwind became an increasing headwind. We kicked up the power from the planned 4800 RPM (the Rotax is connected to the prop through a gear reduction) to the maximum continuous power of 5400 RPM and reworked fuel burn.

The results were a bit of a surprise. The rpm increase was 11 percent, but the fuel burn jumped from 4.6 GPH to 6.1 GPH-or 33 percent. A similar 11-percent increase in RPM on an O-320 or the like would have been about a 20-percent increase in fuel consumption.

The LSAs low speed and limited fuel capacity means monitoring your progress versus your plan is a serious item. The GPS helps immensely here with accurate groundspeeds and airport information at your fingertips. It also lets you explore options with the computer doing the math. We werent getting to Houston without a fuel stop and there werent many options over East Texas to get more gas (Mount Pleasant Regional (KOSA) is a nice airport if youre ever in this area). The limited fuel supply is also a concern if you need to divert for any reason.

We found the published fuel burns in the Remos POH to be spot on. The speeds were a bit optimistic, but not by more than five knots. This plane had the glider-tow kit, which might have mattered. Watch out for performance numbers in MPH rather than knots in the POH and on the flight instruments. Most modern LSAs can do 120 knots and burn 4.5 GPH-but few can do both of those things at the same time. At 120 knots, the fuel burn is lower than a comparable four-seater but not by as much as some people think.

You should also expect to burn 100LL as ethanol-free mogas is still a rarity, especially at airports. If youre flying a Rotax, carry your own oil as it cant use standard aviation oils.

One final surprise as that with climb rates in the 1500 FPM or higher zone, climbing to altitude for a favorable wind is a practical option in many LSAs even on short trips.

Just as en route winds are a significant factor, light wing loading means crosswinds and gusts matter more with LSAs during takeoff and landing. The LSA accident record clearly shows that pilots are coming up short in maintaining control in high winds. Our owner survey supports this, with several comments on the need to watch out for higher-than-expected winds when you reach your destination. We see this as a proficiency issue more than an aircraft issue, however.

Lighter wing loading means a rougher ride in turbulence, which means fatigue. That wont help the issues in gusty landings at all, so rough air is probably not to be underestimated when looking at an LSA for travel.

When it comes to dealing with clouds and precipitation, modern avionics means more flexibility and confidence. Returning to Springdale, we needed to decide between climbing over a solid deck for VFR-over-the-top or dropping below it just when the hills of East Texas and Arkansas were rising. Datalink weather meant we could see multiple airports around Springdale reporting 10,000-foot ceilings or higher as little as five minutes prior. We took the high road, figuring we could monitor that situation as we trolled along over the clouds and change plans if need be. As with the outbound flight, precise speeds and distances with the GPS made it easy to make sure a backdoor was always open.

Had we chosen to go below, we could have used closer-in reports to steer clear of the really low areas. The real-world truth is that terrain awareness on the GPS comes into play as well. Were not recommending you scud run, but the birds eye view of obstacles and high ground on the moving map-color-coded no less- combined with your view out the window is a powerful tool. Being able to look forward over 100 miles of terrain makes for informed strategic decisions as to which

way to divert around a mountain peak obscured by clouds. And if you do blow it, low speed makes maneuvering in close quarters a more viable propos ition.

Some LSAs are legal for IFR flying as well. We discussed this in our October 2008 issue and its too much to reproduce here. Suffice it to say that light IFR in an LSA is doable with the right equipment and manufacturer approval. We even shot two ILS approaches in the Remos (under VFR) for another article and found it quite stable despite shifting winds.

Since comfort is how your body fits in the aircraft, youll need to see which LSA fits you. Many of the designs are quite wide with decent seats. We spent four hours in the Remos doing flight testing before taking on the four-plus hour trip to Houston that evening. We climbed out of the Remos in Texas ready for some Cajun food and a beer, but otherwise refreshed.

The fact that our Remos had an autopilot figured into this picture. Light wing loading means a constant hand-on-stick experience in turbulence without automation. But the autopilot also gave us more options for shifting our position in the cockpit. Heat factors into comfort and the Remos was a blow torch beside the right pilot rudder pedal if the heat was up high enough to keep the rest of the cockpit comfortable. Wed be sure to check out both the heat and the cool-air ventilation on any aircraft we planned to be in for multi-hour legs.

The more we fly the Rotax 912, the more impressed we are with its performance (although, proper set-up is key), but we were quite glad to have noise-cancelling

Our takeaway from the LSA cross-country experience is that the breed is easily comfortable enough for a long haul (assuming you get the seat back far enough). Burning 48 gallons of gas to cover 750 miles in 8.4 hours (headwinds both ways) was worth a smile. Thats 15.6 NMPG, but taking wind out of the equation its more like 20 NMPG. This is a 15-gallon savings over a Cessna 172 and almost a 38-gallon savings over the Cirrus SR22. But we could have brought a couple of friends along in those planes.

The Remos isnt IFR legal, but datalink weather, terrain awareness and a basic autopilot make more VFR missions possible than would have been true even 10 years ago.

Flying an LSA cross-country youll need flexibility and the willingness to execute plan B as needed, but thats true to some degree no matter what you fly.